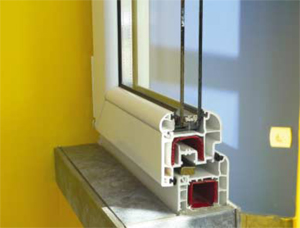 Ege Profil Ticaret ve Sanayi, the second largest PVC profile maker in Turkey, was granted a 26 million euro loan by the European Bank for Reconstruction and Development (EBRD) and the Clean Technology Fund. The financial support package, comprising a 25 million euro loan from the EBRD and 1 million euro parallel financing from the Clean Technology Fund, is aimed to promote greater energy efficiency and more advanced environmental practices in the country.

Ege Profil PVC produces a wide range of plastic goods under the brands Egepen Deceuninck and Winsa. The company operates two manufacturing facilities, one in Cigli, 12 kilometres northwest of Izmir, and another in Kocaeli, about 120 kilometres east of Istanbul. The combined total capacity of both plants is 85,000 tonnes per year.

The funds will be invested in the construction of a new high-technology and environmentally-friendly PVC profile manufacturing plant in the Menemen district, Izmir province. The company is moving production from Cigli to the more specialized industrial zone in Menemen in order to increase its operational efficiency.

A part of the finances is going to be spent for resource efficiency investments at the new plant, including the implementation of photovoltaic solar panels, wastewater treatment and a combined cooling, heat and power (trigeneration) plant as well as the infrastructure required to expand Ege Profil’s PVC recycling activities. The project is also aimed at increasing Ege Profil’s PVC recycling rate to about 15 per cent. As a consequence, the amount of recycled PVC at the plant is expected to increase by at least 800 tonnes per year.

The loan is the first investment under the Bank’s new Near-Zero Waste programme which finances waste minimisation projects in Turkey. The programme launched in July 2015 is projected to drive a profound transformation of waste management in the country, helping it advance towards a more competitive and resource-efficient circular economy.

”The EBRD’s loan will help Ege Profil PVC realize its strategic goal of improving competitiveness on domestic and foreign markets through better operational and resource efficiency. Once these efficiency measures are put in place, we estimate that the company will save the equivalent of the cost of about 1.7 million litres of gasoline each year - enough for a car to travel for over 20 million kilometres”, Frederic Lucenet, EBRD Director for Manufacturing and Services, said.

Assisting the development of manufacturing companies such as Ege Profil PVC and helping them improve their efficiency, boost operations and set higher environmental standards, is part of the EBRD’s efforts to advance the competitiveness of both Turkish enterprises and the country’s economy overall, the Bank stated.

EBRD began investing in Turkey in 2009, and since then it has invested a total of 236 million euro in resource efficiency projects in the Turkish industry. The combined effect of the implementation of those measures is expected to reduce greenhouse gas emissions in the country by more than 645,000 tonnes of CO2 per year.

The EBRD, which is currently operating from offices in Istanbul, Ankara and Gaziantep, has to date invested over 6 billion euro in Turkey through close to 160 projects in infrastructure, energy, agribusiness, industry and finance. It has also mobilized over 12 billion euro for these ventures from other sources of financing, EBRD reports.