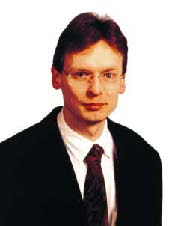 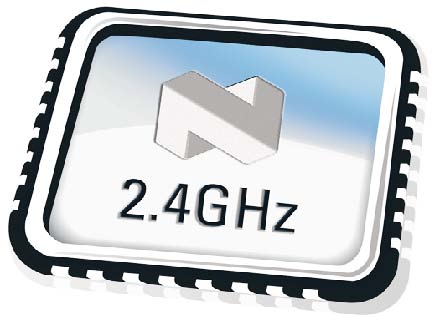 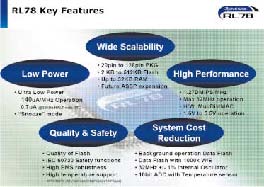 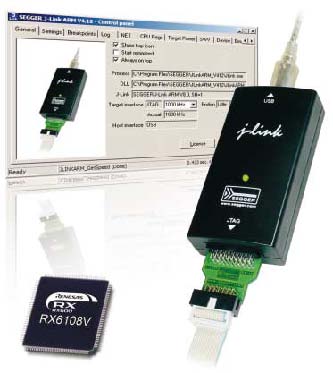 Anyone wanting to expand an existing device to include wireless technology usually connects a transceiver to the microcontroller. It sounds simple, but it isn’t. It requires recalculations regarding cost, quality and risk ratings, development and logistics costs increase and the reliability of the device often drops. Reason enough to consider a microcontroller with integrated transceiver. Many MCU manufacturers have already responded to the wireless trend and the growing demand for transceivers, supplying their chips with different wireless peripherals.

For example, the multimanufacturer architecture with processor cores from ARM helps to minimise the risk of a delivery bottleneck or a failure by the electronics manufacturer. Minor adjustments to the software and hardware enable processors to be exchanged relatively easily, thereby protecting investment in development tools and the build-up of expertise. Thanks to the large number of ARM licensees, customers also have access to a wide selection.

The STM32W is based on a 32-bit ARM Cortex M3 core and the popularity of the STM32 range makes it very interesting. As a rule, it ensures long-term availability and sound support in the event of technical difficulties. The STM32W has an integrated 2.4 GHz IEEE802.15.4 transceiver and is therefore suitable for ZigBee, RF4CE, 6LoWPAN and other network protocols based on the IEEE802.15.4 standard. The receiving sensitivity is 100 dBm and the transmitting power can be up to 7 dBm. Such a wireless-compatible microcontroller offers a number of advantages: As no external wireless module is necessary, the bill of materials (BoM) is reduced and therefore also the logistical expenditure on procurement, storage and assembly. The integration of the transceiver in the microcontroller also has a positive influence on the calculation of the MTTF and MTBF value of the end product.

Someone wishing to operate ZigBee on a 16-bit microcontroller would find a smaller alternative in the Renesas M16C/6B, also with integrated IEEE802.15.4 transceiver. The Renesas RL78 series is suitable for battery-operated applications, such as the nodes of a wireless network, due to its low power requirement and large supply voltage range. The microcontrollers in this series range also offer low energy consumption in Run mode (140 uA/MHz) with high processing power (40.6 DMIPS @ 32 MHz), low energy consumption in Sleep mode, rapid waking from Snooze mode as well as excellent scalability as far as housing sizes and memory expansion are concerned. Through the integration of data flash, Window Watchdog, a real-time clock, temperature sensor, low-tolerance oscillator and safety functions for self-diagnosis, the RL78 series facilitates compact hardware designs with a small footprint.

An even better power balance is provided by small, 8-bit microcontrollers, most of which comprise not much more than a few AD converters and interfaces. They dispense with the broadband DSSS signal modulation of the IEEE802.15.4 standard and rely on ASK, FSK, GFSK and OOK modulation, all of which require little energy. Nordic Semiconductor’s contribution in this field is the nRF24LE1 which uses the globally available 2.4 GHz band. The ShockBurst™ transmission technology and the ‘Gazell’ open-source protocol are designed for low power consumption so that they can easily be powered by a CR2032 coin cell.

The PMA5110 family from Infineon is an 8-bit microcontroller with integrated transmitter, which transmits in all ISM bands below 1 GHz. A wider range and better material penetration compared with the 2.4 GHz band are the primary reasons for its use in home automation and outdoor applications. The derivates set themselves apart from their competitors thanks to their automotive certification, an expanded temperature range of -40°C to +125°C and an integrated 125 kHz receiver, e.g. for wake-up functions.

Significantly more powerful is Infineon’s MD8710. As an integrated wireless peripheral, the ARM Cortex R4 offers both Bluetooth and Bluetooth LE. Comprehensively equipped with interfaces, signal converters and a display controller, the system-on-chip module is a genuine diagnostic and communications processor.

Anyone already using a microcontroller and seeking to expand its circuitry to include wireless communication is faced with the question of whether to install the transceiver externally or to choose a controller with an integrated wireless unit. With a combi solution in particular, manufacturers and distributors generally provide an example protocol which delivers good results without a great deal of expense.

Hardware and software tools
Amongst the manufacturers of development tools, Segger has crystallised its position as one of the leading technology providers within the ARM universe. Segger supplies both hardware and software tools. Its hardware tools include the well-known JTAG debugger ‘J-LINK’ with its various modifications as well as the ‘Flasher ARM’ programming device. J-LINK is supported by renowned compiler manufacturers such as IAR and Keil. However, with the additional ‘GDB Server’ software, it also works with the GNU Project Debugger (GDB). In addition to the standard J-LINK with USB interface, users can also select a number of different variants which fulfil different requirements, for example an additional Ethernet interface, the option for faster download speeds or expanded TRACE functionality, specifically for Cortex-M3.

A RTOS enables the call intervals for various tasks to be individually assigned, something not possible in a superloop. Tasks which can be processed with lower frequency rates are accordingly seldom started, in line with the motto: As often as necessary and as seldom as possible. As a result, the CPU time is only used where it is actually required. Compared with a simple superloop, the clock rate of the CPU falls as a result or it can often be moved into Sleep mode, thus reducing its power consumption. Developers of battery-operated wireless modules should therefore give particular consideration to using an RTOS.