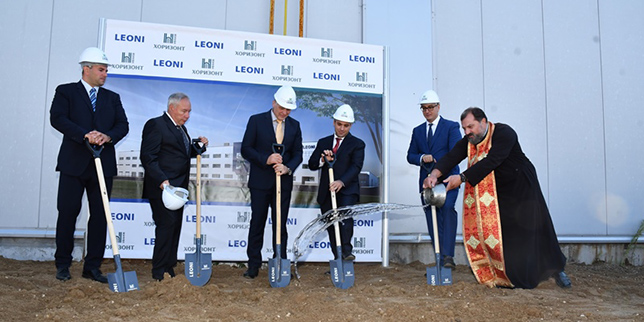 In September this year the German car cable supplier Leoni carried out a groundbreaking ceremony for its new plant in Pleven, Bulgaria. Present at the official event were the Deputy Prime Minister Tomislav Donchev, Deputy Minister of Economy Lachezar Borisov, Mayor and Governor of Pleven Georgi Spartanski and Miroslav Petrov, Executive Directors of Leonion and others. Leoni has announced plans to invest of EUR 32 million and provide 2000 jobs in the region.

Bulgarian company to produce cables for Mercedes and Cadillac

Investor and main builder on the Bulgarian side with a long-term lease is Horizon-Ivanov, which has invested EUR 16 million. According to Svetoslav Bogalinski, Director of Business Development, the construction of this factory is the result of Horizon-Ivanov’s two-year work. He expressed his gratitude to Leoni for their trust and partnership. And he added that this is a success not only of Horizon-Ivanov as a construction and investment company, but also of Bulgaria and the Northwest.

The Minister of Economy also said that Bulgaria and Germany enjoy a record bilateral trade and over the last years that exceeded EUR 7 billion a year.