Yazaki Corporation is building a third factory in Bulgaria 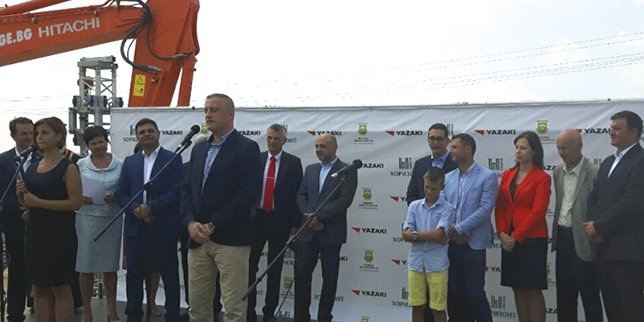 One of the biggest automotive components suppliers in the work, Yazaki Corporation, is investing EUR 23,3 million for a new factory in the Bulgarian town Dimitrovgrad. This will be the Japanese company’s third plant in the country, following the two factories in Yambol and Sliven. So far, Yazaki’s investment in Bulgaria amounts to EUR 60 million, concentrated in these two factories employing about 5000 people.

Bulgaria was chosen over Romania to host the new factory, and local authorities’ activity and perseverance have had a major role in that decision, explains Invest Bulgaria Agency’s director Stamen Yanev. The building of Yazaki’s new plant started in July this year and the final completion is scheduled for the summer of 2017.

"This is a unique investment, there is the first one in the past 50 years and it will change the economic profile of the region", commented Ivo Dimov, the mayor of Dimitrovgrad.
The new factory will employ around 3000 people and will be built on a terrain of 64,000 sq. m, itself occupying 30,000 sq. m. A first group of 50 people have already started their education in a facility near the town of Yambol. A new "pilot factory" will start to function in October this year and nearly 250 people will be employed there.