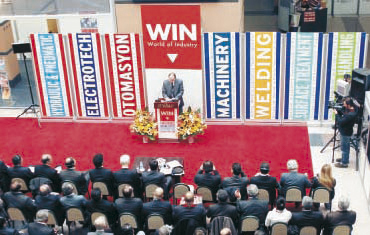 Metal Show & TIB 2022 to present the future of technology

No.1 platform of Manufacturing Industry in Eurasian Region WIN - World of Industry 2010 Part 1, held between 4 - 7 February 2010 in TUYAP Fair and Congress Center, closed its doors with successful results. Organized by Hannover Messe Bilesim, the fair hosted 499 exhibitors and 165 co-exhibitors from 20 countries. The latest manufacturing technologies and thousands of products, brands & services have been displayed at the fair by national and international exhibitors.

Smile on Exhibitors and Visitors’ Faces
WIN Part 1 were full of unique business opportunities especially for exporters, importers, investors and companies searching for new markets. Exhibitors and visitors of the fair were happy at the end of the fair, because the fair was very efficient in aspect of doing business and their expectations were fulfilled. Exhibitors declared their satisfaction regarding the qualification of the visitors and high number of national and international business contacts they built during the fair. Visitors were happy to see latest technologies in manufacturing industry, thousands of products and brands from Turkey and abroad. They could also get detailed information about the exhibitors and displayed products & services easily at the fair ground through the kiosks located in the foyers and digital fair catalogue in CD format, different than last year.

Great Interest from Anatolia
Company owners and professionals from Anatolia active in machinery, welding, surface treatment and logistics sectors were also brought to the fair by the organizer. In frame of this special program, 1.125 industrialists from 13 different cities visited the fair.

Industrial Activities Summit
"Industrial Activities Summit" continued to bring industry specialists, leading businessmen, politicians, scientists, academicians, journalists together again and offered a wide range of conferences, panels and company presentations. All of these events added further value to the show as a platform of exchange for information, know-how and education among professionals of the industry.

7 leading sectors under one roof
Together with 3 different sectors of WIN 2, WIN - World of Industry will bring 7 leading sectors of manufacturing industry under one roof. The fairs to be held during the 2nd phase starting on February 25 and ending on February 28, 2010 are as follows: OTOMASYON’10 (17th Industrial Automation Fair), ELECTROTECH’10 (11th Energy, Electrics and Electronics Technologies Fair) and HYDRAULIC&PNEUMATIC’10 (7th Hydraulic Technologies Fair).
The WIN-Fairs, trade fairs of Deutsche Messe Group Hannover /Germany are organized under cooperation between Deutsche Messe’s subsidiary; Hannover Messe International Istanbul Uluslararasi Fuarcilik Limited Sirketi (HFT) and the joint venture company; Hannover-Messe Bilesim Fuarcilik A.S (HM Bilesim). With 73 national and international supporter organizations WIN - World of Industry is the leading trade fair according to number of supporters.
The ideal platform for business networking
European Commission’s economic forecast report has predicted that Turkey would become the fastest growing country in Europe in 2010 with a 2.8 percent growth rate and the growth rate would climb up to 3.6 percent in 2011.
WIN fairs with their high number of international participants and visitors continue to provide unique opportunities for those companies that seek new markets to enter. As of today Germany, France and Italy have their own national pavilions at the fair. Some of the other participating companies come from Taiwan, China, Belgium, South Korea, Holland, Spain and India. The interest and the trust of the international exhibitors for WIN proves that the platform is the most effective for the manufacturing industry.
WIN fairs continue to bring together national and foreign participants with buyers from the neighboring countries. Under the special program titled the "Hosted Buyer Program," buyer commissions from Middle East and North Africa regions including Iran, Jordan, Egypt, Syria, Ukraine, Morocco, Algeria, Tunisia, Iraq, Kazakhstan, Azerbaijan, as well as South Africa and Russia will be hosted during the fair. They will get to have one-to-one meetings with the fair participants on the "Business Partnership Days".
Moreover, exhibitors get the chance directly to introduce their products and services to decision makers from all around the world. In 2009, 1358 participants from 30 countries found the opportunity to meet 113,992 professional visitors (of which 86% were decision makers) representing 70 different countries.

Hannover Messe Group Companies
Hannover Messe International Istanbul and the Group companies in Turkey focus primarily on planning, organizing and running international events for Turkish and Eurasian marketplace. Their name stands for high professionality and quality standards and guarantees exceptionally effective marketing and business platforms for the different industrial sectors.
A multitude of Group subsidiaries and shareholdings have been established in Germany and abroad. Still pursuing its strategy of ever expanding its business volume, Deutsche Messe AG continues to organize industrial fairs in various countries including Turkey as a part of its international expansion project started in 2007 and takes more roles in its joint venture companies.
After having more shares from the companies; Hannover Messe Ankiros and HIFAS (CeBIT Bilisim Eurasia), Hannover Messe Bilesim; the organizer of the WIN exhibitions became the third company with majority of the shares belonging to Deutsche Messe AG Group of companies. As a result, Hannover Messe International Istanbul will be taking more responsibilities from now on. Joint Venture partners will continue working together for the future success of WIN.