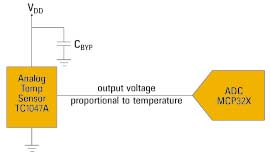 Electronics designers have made use of temperature sensors for many years, in applications ranging from shutting down the system during an over-temperature condition, to providing thermal calibration in high-accuracy designs and displaying temperature data. In the past decade, the need for higher performance and more-compact systems has driven the wide adoption of silicon-based thermal sensors in many different types of design.

The growing use of high-performance digital devices, such as CPUs and ASICs, has resulted in systems that dissipate a significant amount of power. These systems have new thermal management requirements that have led to the development of a new generation of temperature sensor ICs that can simplify design and provide an easy interface to other components. Designers need to understand the differences between the most popular types of temperature sensor ICs, so that they can select the best one for their application – increasing system performance and shortening development cycles.

Silicon temperature sensors make use of the predictable variable properties of semiconductor materials. To be more precise, they operate by measuring the voltage across a bipolar diode, which is created from a PNP or an NPN transistor formed from the substrate of a CMOS-IC process.

The fundamental voltage equation for a diode includes two parameters that are process-dependent: non-ideality constant (h) and saturation current (IS). This dependency can be eliminated by using two current sources to cancel the saturation current variable via subtraction. The non-ideality factor is nearly “one” and varies only slightly for a given process. The simplified expression for a voltage of a silicon pn-junction at two current densities that is proportional to temperature is:

where T is the temperature in degrees Kelvin, K is Boltzmann’s constant, N is the current source ratio, and q is the charge of an electron. This equation shows that the difference in forward voltage is directly proportional to temperature and three constants. Thus, an accurate forcing of the ratio of the two current levels – and not the current source absolute magnitude – can allow a VBE measurement that is (almost) independent of the initial forward voltage, physical size of the junction, leakage, or other junction characteristics.

The principal method of classifying silicon temperature sensors is by their output-signalling method. The first silicon-based sensors on the market were basic analogue-output types. However, there is now a growing trend toward using ICs that incorporate a large part of the signal-conditioning circuitry. Today, the most popular types of thermal sensors are voltage, logic, and (multi-bit) digital output.

Another type of sensor is the temperature switch or logic-output device. This asserts a logic signal when a measured temperature is higher (or lower) than a specified limit. The trip point (limit) is either factory-programmable or can be set via an external resistor. These ICs provide simple logic-level outputs, providing ease-of-design and low cost. Temperature switches often offer additional features, such as adjustable hysteresis level and multiple temperature trip-points and output signals. Typical applications for temperature switches are systems that require a simple over- or under-temperature indication (temperature alert) to shut down the system, turn on a fan or start a heater (thermostat control).

Digital temperature sensors were developed to meet the need for more sophisticated control, better accuracy and higher resolution. These devices were first used in computing equipment, but quickly found applications in many other systems. Typical uses include datacom equipment, in which the high-performance FPGAs or CPUs need to be monitored for over-temperature conditions, and equipment with hard disk drives, where temperature extremes can result in read errors and data loss. A typical temperature-driven implementation for high-power processors is the clock frequency reduction, which results in lower capacitive switching losses, and therefore reduced supply current and extended battery life. Digital temperature sensors provide direct temperature readings without the need for external components. They accomplish this by integrating all the necessary functional blocks in space-saving packages (see Figure 4). A major advantage of the digital interface in these devices is the increased level of sophistication in the temperature-control loop, as well as software control, which allows an easy upgrade when system hardware or thermal properties are changed.

Figure 4 shows a block diagram of a typical digital temperature sensor. The TC77 serial-output sensor integrates the temperature sensor, a high-resolution ADC and digital registers on a single chip. Communication with the processor is possible via an industry-standard SPITM serial bus interface. This bus uses SCK, SI/O and CS pins to transmit and receive data. Temperature is measured by monitoring the voltage of a diode with the 13-bit onboard ADC. The temperature data is then stored in the Temperature Register. If a Temperature Register read operation occurs while an ADC conversion is in progress, the previous completed conversion will be read out. The Configuration Register is used to select either continuous temperature conversion or a shut-down operating mode. The shutdown mode disables the temperature conversion circuitry to minimise the power consumption. However, the serial I/O communication port remains active.

Digital thermal sensors are currently offered with various, industry-standard communication protocols, primarily the SPITM interface, I2CTM protocol and SMBusTM serial interface. The current trend is the development of sensors with lower temperature error and higher temperature resolution. These attributes allow the system to monitor temperature environments more accurately and at the same time detect very small temperature changes. Such a performance allows the system to react more quickly, ensuring a higher level of reliability and thermal protection. In addition to reporting temperature readings to a microcontroller or a logic IC via the digital interface, many of the devices can also receive instructions from a microcontroller. Those instructions are often temperature limits, which, if exceeded, activate a digital signal on the temperature sensor IC that interrupts the microcontroller or the microprocessor. In this way, even in the case of a software lock up (communication not possible), a hardware-based signal can initiate a system action while the temperature is rising to a dangerous level. The microcontroller can then, for example, adjust fan speed or back off the speed of a microprocessor to keep the temperature under control.

System and design engineers now have access to several temperature sensor types. An evaluation of the application’s purpose and requirements can significantly simplify the choice. The output (and type) of the thermal sensor selected for a specific application is determined by the available microcontroller hardware and software resources, as well as the complexity of the sensor circuitry. This can be a hidden cost for the design and can lead to both cost and performance surprises. Digital temperature sensors are easy to interface to the rest of the circuitry and require no additional signal conditioning circuitry. Understanding the differences between the temperature sensor IC types can help engineers to select the best product for the task.