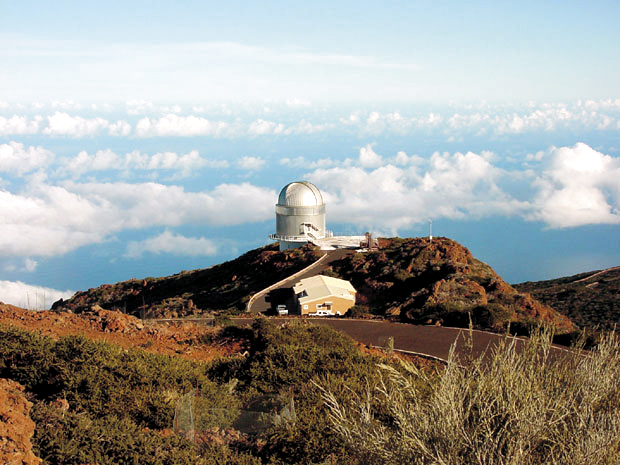 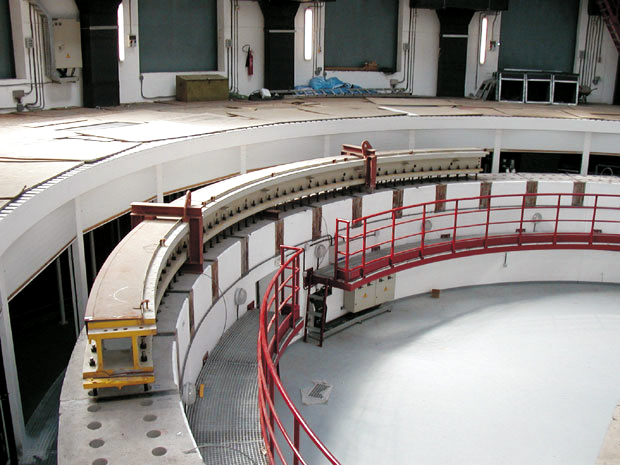 After seven years of construction, the largest optical telescope in the northern hemisphere, the Gran Telescopio Canarias on La Palma (Grantecan) has begun trial operation. HEIDENHAIN model ERA 780C angle encoders are being used to position the telescope - a solution that has already proven itself in numerous telescope projects. The telescope is rotated about two axes - the elevation (vertical motion) and the azimuth (horizontal motion). In addition, the motion of the earth has to be compensated during the sometimes hour-long observations.

The angle of the azimuth axis is measured over a diameter of about 15 meters, which requires a scale tape with a length of 48.48 meters. 1,212,000 lines with the scale-tape grating period of 40 µm are available for the angular measurement. Thanks to the high quality of the measuring signals, each grating period can be interpolated by a factor of 4,096 to provide 10-nanometer measuring steps for positioning the azimuth axis. This results in an angular resolution of 0.0003 arc seconds. Calibration and compensation of systematic errors bring a system accuracy of 0.06 arc seconds over 13.2°. The scale is installed in a slot about the respective axis of motion and is provided with a suitable number of measuring heads.

The 105 million euro system is now in a test phase lasting one year. The hyperbolic telescope mirror consisting of 36 hexagonal segments will be expanded segment by segment until it reaches the total diameter of 10.4 meters. At the same time, all instruments will be adjusted. When ready for operation, the telescope will focus four million times more accurately than the human eye. It will enable astronomers to detect more details than ever before. The photograph shows the dome that protects the telescope as well as the scanning head and scale of the HEIDENHAIN ERA 780C angle encoder by day and night in any weather.

The South-East European Industrial Market magazine is an official media partner of the international trade show Solar PV World 2020, which will take place in the China Import and Export Fair Complex in Guangzhou...

The latest issue 1/2020 of South-East European Industrial Market is already available online! The cover story of the edition is dedicated to the plastic and rubber processing machinery sector in Turkey. You may find the whole content here...

"Turkish machinery producers are committed to be strong business partners of Bulgaria", said Kutlu Karavelioglu, Chairman of the Turkish Machinery Exporters Association, in an exclusive interview...

The newest issue 1/2020 of SEEIM features the editiorial "Lighting products and systems manufacturers in Bulgaria". Read the article to find an interesting market overview of this sector in the country...