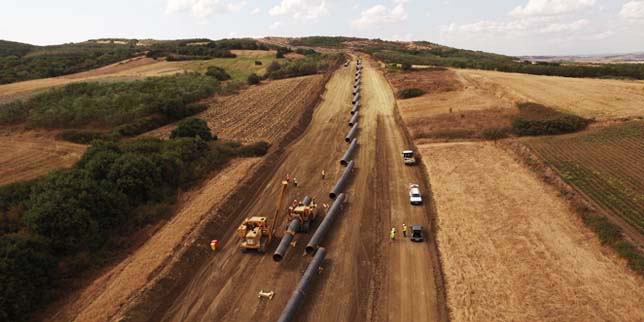 The European Bank for Reconstruction and Development (EBRD)’s board of directors has approved a loan of up to 500 million Euros for the Trans-Adriatic Pipeline (TAP) gas project at a meeting in London. The 4,5 billion euro TAP project is the final leg of Southern Gas Corridor to transport gas from Caspian region, central Asia to western Europe by 2020. After passing under the Adriatic Sea, it will end in southern Italy.

The Southern Gas Corridor value chain has a total estimated cost of USD 40 billion and includes gas infrastructure investments into a 3500-kilometre network of pipelines crossing six countries. The key components are the Shah Deniz offshore gas field in Azerbaijan, the Southern Caucasus Pipeline in Azerbaijan and Georgia, TANAP in Turkey and TAP. The inauguration of TANAP took place in June in Turkey.

With an initial annual capacity of 10 billion cubic meters – equivalent to the energy consumption of approximately seven million households in Europe – the pipeline will make a significant contribution to the diversification of Europe’s energy supply.

The European Investment Bank’s Board earlier this year approved TAP’s eligibility for a EUR 1,5 billion loan, and further contributions from the export credit agencies of France, Germany and Italy are currently under consideration. The EBRD said the pipeline will make a “significant contribution” to the diversification of Europe’s energy supply.

TAP has been designed in accordance with good international practices, encompassing route selection, completion of environmental and social impact assessments, the implementation of robust contractor management controls and ongoing engagement and dialogue with the local population. This includes national environmental requirements, relevant EU legislation and EBRD performance requirements under its Environmental and Social Policy. The Bank will continue to monitor the project during construction and operations to ensure the continued compliance with these commitments.