Timisoara, Romania - an alternative for those left without the EU incentives in RES? 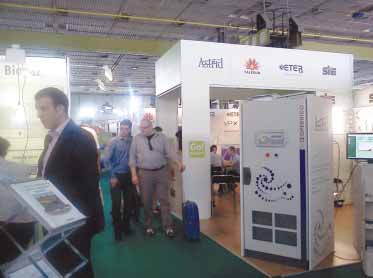 German SAP has started the process for hiring specialists in a new center in Timisoara, Romania

As you know, recently, a number of European countries have cut the incentives for the renewable energy, which makes investors to look for other markets. What options exist currently in the EU? A good example is Romania, having on its side at least three reasons:
•  Incentives /Subsidies through a very generous formula, considered by analysts as equitable and sustainable. (www.roenergy.eu)
• High RES potential, according to E & Y, Romania ranks 6th in the EU in attractiveness rankings for developing renewable energy.
• The costs regarding small investments (in particular with labor, the average wage is less than 300 euros / month).

A number of European companies ( England, Italy, Austria, Czech Republic, Bulgaria, etc.) understood the advantages of investing in Romania, for which they already reserved a booth to the RoEnergy - International Trade Fair for Renewable Energy and Energy Efficiency that will take place in 28 - 30 November 2012, in Timisoara, in the West part of  Romania.

Why Timisoara, 28-30 November 2012?
In Romania, the first investments were made few years ago in developing wind farms. Today, major European brands are counting their profits due to subsidy schemes by granting green certificates. Their success is the best example for other RES investors. After the wind energy boom, analysts estimate that Romania will grow strong in solar energy and bioenergy.

According to Transelectrica some of the highest concentration of solar projects in Romania will be developed in the West part of the country, with epicenter in Timis County. An eloquent proof of this is the solar park Buzias newly opened, through which 1,200 megawatts per year may be delivered to the network, but a number of other projects, from less than 1 MW up to 32 MW are in various stages of implementation. Currently, of the 79 national projects, according to Transelectrica, 36 are in the West part of the country, representing 45.56%, which made of  the West part of Romania, especially Timis county, one of the  most attractive point of investing in renewable energy and related businesses in Romania.

Market sources reveal that Timisoara entered strongly in the eyes of the investors, eager to be among the first to take advantage of the potential financial benefits, such as incentives in the form of green certificates. Because Timis County is rich not only in solar energy, but also is attractive for project developers in biomass, biogas and biofuels, due to extensive agriculture practiced in Banat. Of course, the list should continue in hydropower potential (Resita area plus other counties) and wind potential (shown by measurements made recently in Caras Severin).
The best argument in terms regarding bioenergy is that Timis county is among top leading agricultural producers from Romania, distinguishing itself both in cereals production, as well as livestock. A natural consequence is that farmers, larger and smaller, are starting to think about strategies for recovering the waste grain and slurry by producing energy in the farm. Existing investments, especially lately appeared, are encouraging other farmers to do the same.
But the West part stands out also through the size and forestry potencial, as such, the investors are not lacking in raw material for wood biomass. The furniture manufacturers’ business shows that Romania has a huge potential in the area, which could be beneficial for bioenergy.

It also has the support of the most renowned specialized publications (print and online) from Romania, which are advertising the RoEnergy Trade Fair among the local business environment.

Farmer associations and forest associations from Romania attend at the RoEnergy Trade Fair and constantly promote among its members the benefits of investments in biomass, biogas, biofuels.

Conferences, place of debates and trends

With what news the RoEnergy returns in Timisoara?
In parallel with the Exhibition, will be held also the Conference "Solar Energy" in 28 th November 2012, organized in collaboration with the New Energy Sources Association (SUNE) and the Conference "Bioenergy, research today, the energy of tomorrow", held on 29 th November 2012, organized in collaboration with the University of Agricultural Sciences and Veterinary Medicine of Banat Timisoara (USAMVBT) and Politehnica University of Timisoara, both reached at the third edition.

Thus, the academic partners papers’ will be completed with the support from the business environment, in a professional framework to discuss the most debated current issues.

The RoEnergy Trade Fair arrived at the third edition in Timisoara, the West part and the fifth edition in Romania.

So far, the RoEnergy succeeded in creating an authentic RES network, managing to bring in Romania investors from European countries like ( Italy, Germany, France, Czech Republic, Netherlands, Spain, Bulgary, Finland, Holland, Austria, Hungary, etc.), Asia and the USA. Companies from abroad coming for the first time in Romania at the RoEnergy Fair.

As a concrete result of participation to the RoEnergy Trade Fair, foreign companies have opened subsidiaries in Romania, established new business relationships or marketed their products through local dealers, thus contributing to the infusion of capital, know-how and technologies.

Write an email for booking a booth to the RoEnergy Trade Fair on: info@roenergy.eu, marketing@roenergy.eu