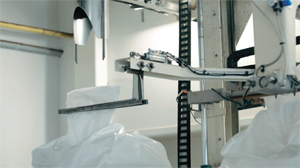 Thrace Plastics Co S.A. was founded in 1977 in Xanthi, Greece by Stavros Halioris. Following a successful course of strategic development and expansion through acquisitions both in Greece and abroad, the company today owns and manages the companies of Thrace Group in their entirety.

Apart from its managerial role, Thrace Plastics Co S.A. also engages in the production and trading of PE/PP packaging solutions, possessing this way a powerful position in the Greek market while constantly developing a solid sales network abroad.

From 1996 onwards, Thrace Plastics Co S.A. has specialized in PE/PP converting through extrusion, printing and sealing in the sectors of industrial packaging, constructions and consumer packaging. Its facilities include blown film production lines of single-layer and multi-layer film as well as flexi labeling machinery.

The company is active mainly in Greece, providing for the largest part of the demand for FFS film and pallet cover film for industrial products. Through its close collaboration with its subsidiaries, Thrace Plastics Co S.A. has created a solid sales network in Great Britain, while targeting the markets in the rest of Europe.