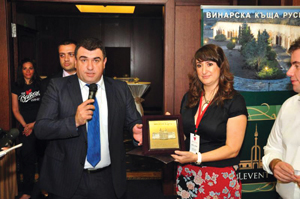 Galina Niforou, Chairwoman of BWEA: The SEE region is going through a real vine-growing, wine-making and wine-marketing renaissance

This year the international Panel of Judges will be composed from the top global wine personalities. They shall taste the best wines of the Balkans and re-discover their unique character, richness, nuances and regional complexities. With the entire infrastructure in place, encouraged with the great response to the project throughout the last two years, the organization committee is absolutely dedicated to further promotion and branding of Balkan wines.

It has secured a great media coverage of the BIWC 2014 Competition and Festival through various TV, radio, newspapers, magazines, web, local and global social networks.

What to expect from BIWC 2014?
The third BIWC Competition will take place on June 5-6 and the BIWC 2014 Festival follows through on June 7-8 at Grand Hotel Sofia, Bulgaria. Specialized Trade & Media Tasting for the BIWC 2014 panel of judges, distinguished importers, distributors, wine buyers, wine critics, journalists and bloggers is scheduled for June 7, 2014.

The BIWC 2014 Competition is dedicated to wines from the Balkan region in order to attract attention of the global wine community. The organizing committee has invited wine producers from each country of the South-East Europe and other countries to participate both at the BIWC 2014 Competition by sending samples of their best wines and at the BIWC 2014 Festival to showcase at Grand Hotel Sofia their great wines to the local and international public.

The BIWC 2014 winners will be announced officially at a special Awards Ceremony, followed by a Gala Dinner, to take place on 7 June 2014 in Grand Hotel Sofia. At the Gala Dinner there will be a possibility for the awarded wines to be tasted at the special WINNERS TASTING BAR.

The wines competed in five categories: sparkling, dry white, dry rose, dry red and dessert. More than 50 wineries presented their wines to the public during the BIWC 2013 Festival. The first and the second edition of the Competition and the Festival in 2012 and 2013 created truly a great awareness among the global wine fraternity.

The international jury of the BIWC 2013, under the chairmanship of Konstantinos Lazarakis MW, awarded a total of 36 Gold Medals (Bulgaria: 16, Greece: 6, Macedonia: 5, Hungary: 3, Croatia: 2, Montenegro 2, Serbia: 1 and Turkey: 1) which represents around 9% of all wines, which entered the Competition.