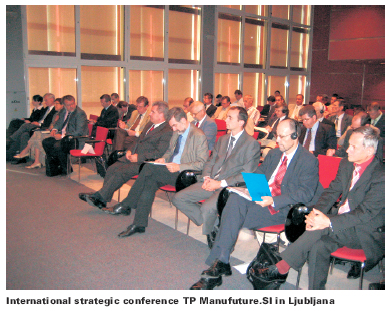 Technological platforms (TP) are a mechanism of the development policy, established by the EU for defining strategic advantages and opportunities of individual technological areas. On the area of research and development they encourage target-oriented investments and thus enable more efficient innovation and industrialisation, and at the same time encourage coordinated functioning of European and national research programmes. Technological platforms also support a constant development of knowledge connected to individual technological areas and the use of new technologies. The key characteristic of technological platforms is that the leading role in defining the tasks is taken over by the industry. They are an open structure, which means that for their efficient functioning all main participants have to be included; industry, institutes, universities, public entities, state institutions; their purpose is to encourage partnership with other sectors and to prepare a basis for political dialogue.

The mission of the technological platforms is to prepare and perform such innovation policy, which will enable sustainable and successful development for the future of the European industry. Their goal is to strengthen competitive capacity of the European companies and economy, based on development and knowledge in compliance with the Lisbon declaration. In such way the European industry would become the most competitive and dynamic economy, based on state-of-the-art-knowledge.

TP Manufuture. EU was established for the area of European manufacturing technologies in 2002. Shortly afterwards, an informal Slovenian group was formed, and on 4 May 2005 Slovenian Manufuture. SI was officially established. It has been organised similarly to the TP Manufuture. EU, with the emphasis on those areas, which are important for the development of Slovenian industry. TP Manufuture. SI is a widely open organisation, welcoming various participants, interested in the preparation of strategy for manufacturing technologies. Presently there are 60 members included; 44 of them are companies, among the most active ones are the following ones: Gorenje orodjarna d.o.o., Alpina d.d., Niko Zelezniki d.d. and Savatech d.o.o., and 16 institutions, among the most active ones are the following: TECOS, Slovenian Tool and Die Development Centre, which is also the coordinator of the platform, Slovenian Chamber of Commerce and the Faculty of Mechanical Engineering at the University of Ljubljana. They form a competent group with rich experiences from participating in 5., 6. and 7. EU Framework Programmes and national projects.

Goals and activities of the TP Manufuture. SI

The cooperation among companies has been changing over the years. Before 1990, manufacturing companies in Slovenia acted individually, without major networking activities. Later on, companies started to network trough technological centres and clusters. The technological platforms enable a step further and include other infrastructural subjects, which are important for the development of the branch. The main goal is to reach a better global competitiveness.

TP Manufuture.SI is a basic, innovative and advanced horizontal platform, whose mission is to create and perform innovation policy, which will enable advanced development of manufacturing technologies, tool manufacturing and mechatronics with a distinguished vertical integration, mostly in the area of economy, knowledge use and transfer; with all the components, such as education, development and innovation. The basic mission of TP Manufuture.SI is to stop the trend of shifting production to the countries with low-wage labour (China, Taiwan, Korea, India) revitalisation of manufacturing companies, stimulating innovation in companies and improvement of competitiveness.

The activities for reaching the above-mentioned goals are the following:

•Creation of an organisation, based on integrated knowledge, acting as a link between the academic sphere and industry;

The expected long-term goals of the above activities are the following:

•The rise of technological level of production (measured by the Ovehan’s scale);

•Shorter time of development and production of tools or mechatronic systems by 70% compared to the year 2004;

•Lower manufacturing costs by 60% compared to the costs in 2004;

•Improved reputation of the profession;

•Improved communication capacity among the members and other technological platforms.

After making the initial decisions, TP Manufuture.SI prepared a consultation with the aim of creating its vision. Later on, an extensive sector analysis was performed. Based on these documents, the Strategic Research Agenda (SRA) was prepared and it was passed to the HLG group of TP Manufuture.EU. TP Manufuture.SI actively participates in the European technological platform. Its member has been appointed a representative of the HLG group in TP Manufuture.EU and a group for cooperation with the s.c. Mirror group within TP Manufuture.EU has been formed. Every year the technological platform organises various events. Numerous meeting have been held, enabling successful company networking, an international strategic conference was organised, several workshops on the participation in the international projects were carried out, and many more. In the past years, members of TP Manufuture.SI have successfully participated in numerous international projects. Many marketing actions have been performed. Last year TP Manufuture.SI actively participated in the preparation of development priority themes of Slovenia. Thanks to its endeavours the most important priorities from the area of manufacturing technologies have been included in the document submitted to the Slovenian Research Agency and Ministry of Higher Education, Science and Technology. A while ago, several active members of TP Manufuture.SI were selected to the newly formed Governmental council for competitiveness. Here I would like to mention Dr. Blaћ Nardin, who was the first president of TP Manufuture.SI. This is a unique credit for our good work and at the same time an opportunity for TP Manufuture.SI for further realisation of its goals.

Furthermore, we have also actively participated in the activities of EU TP Manufuture, which are necessary for the long-term existence of the platform. This month the so called »Manufacture industry« cluster was adopted for execution at the last session of the EUREKA programme. During its preparation the key role, besides the Italian coordinator, was performed by three members of TP Manufuture.SI. In future a detailed action plan should be prepared.

Besides, we have also started preparations for the common project of all TP Manufuture.SI members on the area of training employees in the manufacturing technologies.

Technological platform TP Manufuture.SI, connected to the European platform TP Manufuture.EU and other related platforms, directs research and development, influences innovation and education on the area of manufacturing technologies and systems in order to enable high-added-value manufacturing in Slovenia. Above all the main condition for the success of its activities is the active participation of the key economic subjects.