Manufacture of chemicals and chemical products in Bulgaria: Neochim 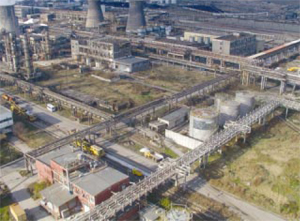 Manufacture of chemicals and chemical products in Bulgaria: Agropolychim

Neochim PLC is the successor of the Chemical Plant in the town of Dimitrovgrad in Bulgaria which started its production activities on 5th of November 1951. In the beginning nitrogen and phosphate fertilizers were produced. Later on, expansions, reconstructions and modernizations of the production facilities were carried out.

In 1987 a new complex for the production of ammonia, nitric acid and ammonium nitrate was commissioned. In the period 1992-93 the plants producing sulfuric and phosphoric acid, aniline and nitrobenzene were shut down. Neochim PLC has been registered at the district court of Haskovo with its seat in the town of Dimitrovgrad.

The plant’s infrastructure is distributed on two plots with a total area of 2 300 decares, situated on both banks of the Maritsa river, outside the town limits. It is located 200 km southeast of Sofia, in a region with well-developed railway junction and near to Pan - European transport corridors # 4, 9 and 10.

Neochim is the only company in Bulgaria producing formalin (formaldehyde solution), urea-formaldehyde resins, sodium nitrate, ammonium bicarbonate, laughing gas (nitrous oxide), etc.
On the local market all products of Neochim PLC are distributed by the trading company Euro Fert PLC. The products of Neochim PLC are well received on the international markets. The company has commercial relations with partners from USA, Brazil, Great Britain, France, Italy, Greece, Turkey, Poland, Romania, etc. 40 to 60% of the earnings are formed by exports.

Strategic development of Neochim PLC is implemented with the realization of investment projects:
•A project for the construction of a Turbogenerator Plant was completed, in which over 10 million BGN were invested.
•In 2007, the company introduced a production line for mixed fertilizers NPK (blend) in which 1.5 million BGN were invested. The production line has a capacity of 8 tonnes per hour.
•In cooperation with the Russian research institute OAO GIAP (Moscow), Neochim PLC developed pioneer technologies for reconstruction of the ammonium nitrate production unit AC-72. In 2008, the production capacity of AC-72 was increased by 50%.
•In 2012, an investment in an energy efficiency and carbon emissions reduction project was made.

The first stage of the revamp was completed during the same year, and thus natural gas consumption per tonne of ammonia produced was reduced significantly. The expected economy is estimated to millions of EUR yearly.

Another 49 million BGN will be invested during the period from 2013 to 2017.
In 2012, the most successful export destinations for Neochim PLC were the USA and Turkey. In Europe the company has strong market positions in UK, Greece, France, Romania, Italy, Macedonia, and Spain.