Southeastern Europe and the financial crisis 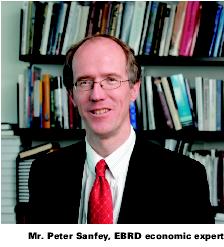 In a recent working paper, Peter Sanfey, leading eco-nomist at the EBRD, explains how the crisis evolved and how it has affected this region.

You note in the paper that south-eastern Europe was blissfully unaware of the crisis in 2007 and 2008. Why?
The region had really taken off in the past decade. It has had a number of years of high growth, low inflation, record inflows of foreign direct investment and there was a lot of confidence building in the region. So when the global crisis hit in 2007, initially there was a feeling that south-eastern Europe wouldn’t be so badly affected. But we all – the countries involved and outside commentators – underestimated the extent to which this region would be affected by the crisis. By the end of 2008, it was clear that south-eastern Europe was going to experience a big shock. And that is what happened.
The paper explains some of the reasons why the region was affected, what were the most important factors in driving the downturn and what the reactions were of policy makers, central banks and also people in the region. One of the most important points I emphasise in the paper is that the region has reacted maturely to the crisis. It has reacted perhaps better than many people expected. In saying this, I would like to remind readers that south-eastern Europe still has an image problem – an image of being inherently volatile – which it is still working to shake off. The last 10 years have helped to dispel that image, which has been severely tested by the financial crisis.

What was the region’s reaction to the crisis?
Governments have responded sensibly. Throughout the region, professionally managed central banks have introduced sensible monitoring policies to mitigate the worst effects of the crisis. Businesses struggling with the crisis have at times shortened working hours or cut jobs but they haven’t been overreacting. The banking system in the region has also proven to be stable and we have seen no big banks fail. There also appears to be a wide understanding among the people in the region of the truly historic and global nature of the crisis and an awareness that the fact that their economies are struggling and that unemployment is rising is not necessarily their governments’ fault. This explains why we have seen relatively few strikes and street protests in the region. There have been isolated cases of workers’ protests in several countries, including Romania and Serbia, but generally speaking people in the region have reacted maturely to the crisis.

What has been the impact of the crisis so far?
It differs from one country to the other. For example, Albania seems to have escaped the crisis relatively unscathed and managed to record positive growth in 2009. On the other hand, Romania, the largest economy in south-eastern Europe, was quite severely hit by the crisis and recorded a GDP fall of more than 7 per cent.
Although there have been differences among countries, there is a general recognition that governments had limited room for manoeuvre. They were not in the position of having massive deficit-financed packages of the US or the UK type but they received support from the IMF, the EBRD, the EIB and the World Bank, all of which stepped up investments and assistance to the region to help it overcome the crisis.

In what form did the support come to these countries?
The support has been multifaceted. The IMF is present in countries such as Serbia, Romania and Bosnia and Herzegovina with formal programmes. Romania for example received a combined package of 20 billion Euro from the IMF, the EU, the EBRD and the World Bank. This was a very strong signal by the international community in support of the one country in south-eastern Europe that was perhaps the most affected.
It is important to note that IMF support has been combined with a major new initiative known as the Vienna Initiative. It is a unique first-time cooperation among international financial institutions, including the IMF, the EBRD, the World Bank and the home central banks, the host central banks and foreign banks with subsidiaries in the region. The existence of such an initiative proved that cooperation is in everyone’s interest.
By signalling support for the region, participants in the initiative are assuring investors that they believe that sensible macroeconomic policies will be carried out, in the context of IMF-supported programmes. Most importantly, private banks are signalling their long-term commitment by maintaining levels of exposure and support for their subsidiaries in the region. This wide cooperation is the best explanation of why there has not been a banking crisis in south-eastern Europe.

Is the worst over in south-eastern Europe?
There are plenty of grounds for cautious optimism on this point. Some economies are showing visible signs of recovery and we do not expect negative growth in any country of this region this year. But there are still significant downside risks and we may be unpleasantly surprised again. One thing we have to watch closely is how the current crisis in Greece will play out, as a number of major Greek banks and companies are very active in south-eastern Europe.
A severe downturn in Greece could also adversely affect the flow of remittances back to certain countries, notably Albania. It highlights once again an important message – that south-eastern Europe is part of the global economy and can no longer be insulated from events elsewhere.