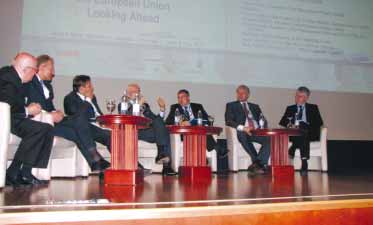 The Management Forum of the Southeastern Europe in Belgrade, Serbia (19 - 20 September) has brought together a great number of home and foreign economic experts and businessmen.
Addressing participants of the Management Forum of Southeastern Europe in the Serbian Chamber of Commerce, Serbian Prime Minister Ivica Dacic underlined that the economic recovery is a national priority and that it has to be based on new investments. Jelena Milenkovic has more.

Prime Minister said that Serbia needs a plan to stabilize the national currency. Dacic explained that the plan must result from coordination and joint work of the Serbian Government, monetary authorities, and businesses. The Prime Minister emphasized that elements of the plan should include efficient use of instruments of the monetary policy, attraction of foreign investments, prevention of foreign currency drain, avoidance of unnecessary imports and encouragement of exports.

Dacic said that it is not realistic to call for tightening the belt and austerity measures, as citizens have nothing to save. Half a million of pensioners have pensions lower than 15,000 dinars (about 130 euros), while more than one million of them receive less than 20,000 dinars (about 170 euros), and if exposed to frozen or lowered pensions, citizens will not be able to survive," Dacic said. He said that Serbia’s advantages are agriculture, food industry and energy, adding the new investment cycle should be launched in these industrial sectors. The commencement of Fiat cars from Kragujevac and construction of Southern Stream are positive examples.

The task of all of us must be creation of attractive environment with a stable currency, more favorable price of capital, incentives for exporters and foreign investors. Rebalance of the 2012 budget is only an obligation fulfilled, but only with the 2013 budget will the Government respond to tasks before it, including the budget deficit being 3.5% of the GDP. The Serbian Government will have talks with the IMF, World Bank, and all other international financial institutions in order to resolve problems, said the Prime Minister.

The host of the international Forum and President of the Serbian Chamber of Commerce Milos Bugarin said that the crucial issue for the entire region is how to accelerate economic growth and reduce unemployment and poverty in the crisis. Business leaders need to initiate regional connections among companies in fields of energy, information and communication technologies, infrastructure, finances, agriculture, food industry, and insurance, Bugarin assessed.

World Bank’s Chief Economist of the Europe and Central Asia Region Indermit Gill, Head of the World Bank Office in Serbia Louis Brefort, representatives of the banking sector and businesses participate in the two-day Management Forum of Southeastern Europe. The goal of the Forum is to draft recommendation and launch initiatives to improve economic and commercial cooperation in the region.

The Southeast Europe Management Forum is continuing the tradition of the Milocer Economic Forum which was held from 1993 to 2008 in the organization of the Serbian Economists Association in cooperation with the Montenegrin Association of Economists. The Milocer Economic Forum was focused on the basic transition sub-processes: privatization/restructuring, disinflation policy, institutional changes and reindustrialization, in the countries of the region. The Southeast Europe Management Forum focuses on problems of post-transitional economies, especially from the perspective of economic subjects - companies, banks and other financial intermediaries. The main goal is to find solutions to the problems of business strategy, restructuring, financial management, strategic marketing, HR management, economic subjects and how to adjust them to the world’s best business practices. The co-organizers of the Forum are the Serbian Economists Association (SES), IEDC - The Bled School of Management and the Croatian Association of Economists.