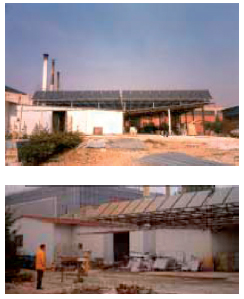 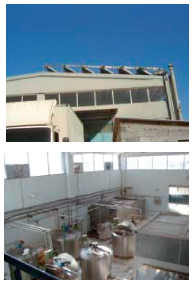 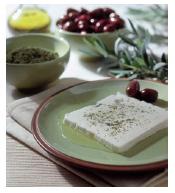 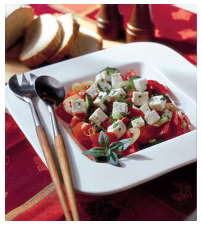 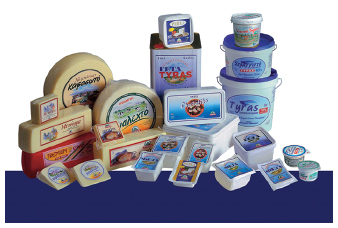 Greece is one of the most successful countries worldwide in the use of solar thermal energy. For many years, the number of installed parks of solar collectors per person has been the highest within Europe. Solar collectors proved their efficiency not only in the residential filed, but also in the light industries those require the use of low-temperature water. These are industries, which have relatively low energy consumption and the energy derived from solar systems substitutes an important part of conventional fuels in their balance – diary industry, textile, chemical, beverage industry, etc. Solar thermal systems can greatly contribute to energy savings during the production processes in the dairy sector, which demand water temperatures of 40-80 oC. Such processes are bottle washing (60 oC), pasteurization (70 oC), yogurt maturation (40-45 oC) and cleaning-in-place (70-80 oC). The hot water produced by the solar collectors can also be used for pre-heating the water entering the installation’s steam boiler. In this case, the energy contribution of the solar system is relatively small both in comparison with the total energy demand, as well as in absolute figures.

In recent years several interesting projects for process heating in the diary industry was realized in different parts of Greece.

MEVGAL is the largest milk company of Northern Greece and the third largest producer of fresh dairy products in the country. Factory produces and sells under its brand name more than 170 products - fresh pasteurized milk, traditional and Western Style yoghurt, cheese products, desserts rice puddings, gelatin deserts, milk creams and cholesterol-free dairy products. The company is distributing its products through more than 22,000 small and large points of sale in Greece while at the same time exports to 23 countries around the world.

Description of the project

A large-scale solar thermal system for hot water was installed on the roof of the dairy company. Total area of solar collectors is 727,2 m2, 403 m2 of which are selective flat plate collectors; 216 m2 - flat plate collectors and 108 m2 – CPC collectors all inclined on 45o South. Water is heated in two 2,500 liters storage tanks through a heat exchanger and a closed-loop circuit communication with the solar collectors. The water is then used in the factory’s washing machines and for preheating the water entering the steam boilers. Any auxiliary heating required is provided by the steam boilers. The system’s energy performance is of the order of 660 kWh/sq.m/year. The back-up heating is fulfilled by 3 heavy oil - fired steam boilers (12 MW).

The investment in solar installation was undertaken jontly by the Centre for Renewable Energy Sources-CRES (72.5%) with a subsidy through the Operational Programme for Energy for the promotion of energy efficiency, MEVGAL S.A. (20%), and the Agricultural Bank of Greece (6.5%). The system manufacturer was Intersolar S.A.

Apart from installation of renewable energy sources at its factory, MEVGAL also has demonstrated particular sensitivity to issues of environmental protection. Solid evidence of MEVGAL’s sincere environmental concern is the operation of a modern biological waste treatment plant, as well as the operation of a whey condensation unit unique in its kind in Greece. Additionally, Mevgal takes part in an alternative waste packaging management system and recycles paper, glass and metal waste materials in cooperation with private companies. MEVGAL also participates in the Recycling and Exchange Training Programme (RETP), according to which, the recycling of empty ink cartridges saves capital, which is donated via RETP to charity organizations and educational institutions.

ALPINO S.A is a dairy plant with 110 employees in Thessaloniki, Greece. Factory operates 8 1/2 hours a day, 7 days a week. Its hot water consumption is 30-40 m3/day. Required temperature of process water is 20-80 oC for washing machines and 20-130 oC for other processes. The installed solar system is designed for water pre-heating in steam boilers. Solar collectors’ area on factory’s roof is 740 m2 devided into two branches. The first branch consists of 14 parallel branches with 9 collectors in each branch and capacity of the soral storage tank 10 m3. The second collector’s field layout has 18 parallel branches with 9 collectors in each branch and storage tank of 15 m3. The collector’s type, provided by Sunny S.A, is selective flat plate collector with water-glycol transfer medium, inclined on 45o South. It secures operating temperature of 20-70 °C.

The hot water from the closed-loop hydraulic circuit of the two branches of the flat solar collectors heats (through an internal heat ex-changer) the water in two closed storage tanks. Тhe hot water leaving the storage tanks is then used for the pre-heating of the water that enters the steam boiler. Any other demand for heating is ensured by the 3 steam boilers 2x1.2Mcal+1x4.8Mcal of hard oil. The installation was financed by 50% by the OPE with a GSR (Guaranteed Solar Result) contract.

Mandrekas S.A. is a small dairy factory situated on the outskirts of the city of Korinthos. Its main industrial activity is production of yogurt. Factory operates 8 hours a day, 5 days a week. Its hot water consuption is 0.5 m3/day. Reguired temperature of process water for yogurt is 30-70 oC and for pasteurizing – about 100 oC.

The installed roof solar system is destined for yogurt maturing process. Collector’s area is 170 m2 with inclination of flat plate collectors on 45o South. Collector’s field layout consists of 13 branches connected in parallel with 5 collectors per branch. Capacity of the two solar storage tanks is 1000 lt each. The Auxiliary heating is provided by a steam boiler with 600 kg capacity-LPG.

Tyras S.A is a diary company in Trikala area, Central Greece. Main company’s activity is production, distribution and export of cheese, yogurt and other dairy products. Factory has a central energetic solar system for its daily needs of hot water installed by Solenergy Hellas SA. The solar system consists of 358 flat selective solar collectors (Chromagen CR-120 Central) of 1009,56 m2 area situated on a specially designed concrete area. The heat transfer medium is water-glycol. One water storage tank of total capacity 50.000 lt is situated in the nearby the factory area. Building Management System (BMS) is accomplishing the control of the entire installation of heating energy production. The solar system is operating at 20-80 °C.