Slovenian priorities in the field of energy, telecommunications and industrial policy 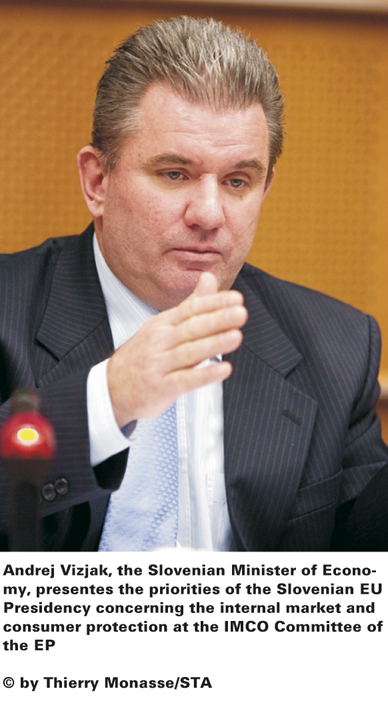 Minister of the Economy Andrej Vizjak presents Slovenian Presidency priorities in the field of energy, telecommunications and industrial policy at the European Parliament

“The Committee on Industry, Research and Energy has so far cooperated successfully with the EU Council in the above areas,” said Slovenian Economy Minister, Andrej Vizjak, opening his speech at the European Parliament in Brussels. He was presenting the priorities of the Slovenian EU Council Presidency in the spheres of competence of the Competitiveness Council and the Transport, Telecommunications and Energy Council (TTE). The Minister highlighted the energy sector as a sector which will remain “a global priority for years to come”.

He said that, during its presidency, Slovenia would like to continue and speed up work on sustainability, competitiveness and security of supply. “We will therefore focus on the internal gas and electricity markets, renewable energy sources, energy technology and external energy policy.”

The Minister emphasised several sensitive points which in the next few months will require detailed discussion in Council and with the European Parliament. He specifically highlighted effective unbundling and said that a solution acceptable to all parties must be found, even if this took the form of a third additional alternative.

“The Slovenian Presidency will strive to ensure that the TTE Council on 28 February adopts conclusions on the Strategic Energy Technology Plan and that the Plan is adopted at the European Council on 13 and 14 March,” underlined the Minister.

In the field of telecommunications, the Minister discussed three legislative proposals from the Commission relating to the existing regulatory framework for electronic communications. He said that spectrum management reform, as discussed in the context of the Directive on Better Regulation, is an important task for the European Parliament and the Council. “In addition, the Presidency will focus on the matter of the spectrum released by the digital switchover, having regard to the Commission communication on reaping the benefits of the digital dividend. The Presidency’s objective is to adopt decisions in June.”

The Minister also mentioned the electronic communications market authority and a Decision on mobile satellite systems.

According to Mr Vizjak, the successful launch of the new Lisbon cycle is a priority in the field of competitiveness which will be discussed at the first meeting of the Competitiveness Council. He also raised the matter of policy for small and medium-sized enterprises, affirming that the Slovenian Presidency would like to focus on the development of SMEs.