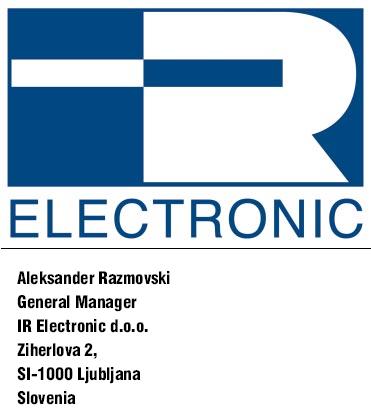 Arrow has been present in Slovenia since 1999. We met Aleksander Razmovski, general manager of IR Electronic, the Arrow Company in Slovenia

What made Arrow enter with local presence into relatively small emerging market?

Playing global – acting local made Arrow one of the biggest players in distribution of electronic components. After political changes in Eastern countries, Arrow was looking for new opportunities and new markets. Slovenia was a natural choice for Arrow. Small, but the most developed among all Eastern countries, with good infrastructure, skilled people and western-like culture. In 1996 Arrow started cooperation with IR Electronic, a local distributor with strategy well in line with Arrow’s. IR Electronic had 16 distribution lines, good market share and a group of well-trained people. They were also presented in countries of former Yugoslavia.

After several years of close cooperation, IR became a part of Arrow in 1999. Since the acquisition the company revenue grew 400%. For most of the years the company has been among 500 fastest growing companies in Slovenia and among those with D&B A1 rating.

Which are the major market segments and how do you approach them?

Market in Slovenia is somehow unique comparing it to the other emerging countries.

The living standard in the country is by far too high for contract manufacturers where production depends on low cost working population. The majority of the market are local companies with their own products well positioned in European and global market.

The main market segments are Telecom & Datacom, Industrial, White goods and Automotive. All customers are expanding their presence far beyond local markets. Some of them are important global players in their market segments.

Since the beginning, IR Electronic has been focused on demand creation and new projects. We strongly believe that our advantage is in providing solutions to the customers rather than just selling a component. For the majority of the customers’ demands, we can offer multiple solutions from technology edge products like VDSL chipsets, network processing, etc., down to simple capacitors and resistors. We have a unique position to select the best matching solution for virtually any customer’s requirements. Local warehouse is used as a buffer to fulfill customer’s delivery requirements.

What are your plans for the future?

In the last couple of years a lot of resources have been invested in people, new markets and new projects in all market segments. We expect big part of them to improve significantly our revenue in following years.

A dedicated person has been appointed for Croatia. A partner program with Vitaelko, a local company in Serbia has been set up. We strongly believe that these countries are at the beginning of a strong development cycle. When the wave of growth hits the market, we want to ride it on the top.