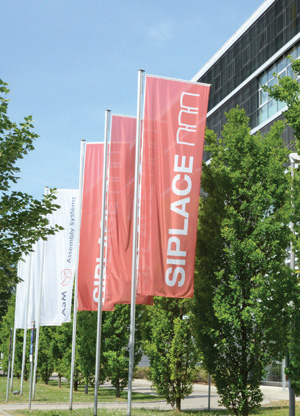 Using synergies to add market share
At the center of the SIPLACE press conference on the Productronica was the progress made in integrating the company into the ASM group. ASM Pacific Technology (ASMPT) had acquired the SIPLACE team and its SMT business in January 2011 from Siemens and integrated it as a separate business unit under the ASM Assembly Systems name. In his presentation, Gunter Lauber, CEO of the SIPLACE teams, pointed out the rapid success of this integration, for which he credited in part the industry experience of the ASM group, which has for many years been a leader in the backend/chip assembly segment with its solution for waver and chip production. According to Lauber, thanks to the new owner’s decision to keep the SIPLACE team in place along with its locations and its cluster organization, the company did not have to waste any time with restructurings in the current boom, but could focus on serving the needs of customers and markets. In a second integration phase, the SIPLACE team plans to gain additional market shares by exploiting its improved access to Asian markets, lowering its costs through shared sourcing and expanding its solution spectrum through new R&D initiatives.

SIPLACE integration is making good progress
On the occasion of the SIPLACE press conference for the upcoming Productronica trade show in Munich, W. K. Lee, CEO of ASM Pacific Technology (ASMPT), pointed out that the ASM Group is now the supplier with the widest-ranging technology and product portfolio for the electronics industry. ASMPT is the only equipment manufacturer in the world that integrates solutions for all process stages from front-end (wafer design and production) to back-end assembly (chip packaging, bonding, etc.) to SMT placement solutions provided by the SIPLACE team. W. K. Lee also expressed his satisfaction with the progress in integrating the SIPLACE team, which joined ASMPT in January 2011 as ASM Assembly Systems GmbH & Co. KG. ASM Assembly Systems, which operates as a separate business unit within ASMPT, accounted for almost one-third of ASMPT’s revenues of US $944 million in the first six months of 2011, contributing to a significant sales increase of 48.8 percent for ASMPT. According to CEO Lee, the targeted synergies in the areas of technologies, market access and organization within the ASM Group provide a solid foundation for expanding the market shares of ASM Assembly Systems all over the world.

Regionally balanced
The CEO of ASMPT underscored his satisfaction with the progress made during the integration by providing a look at some numbers. In the first six months of 2011, ASMPT generated record sales of US $944 million. Over 32 percent of these revenues came from the SMT business with SIPLACE placement solutions, which ASMPT had acquired only in January of 2011. ASMPT’s revenues for the first half of 2011 exceeded those generated in the already very successful second half of 2010 by 37.4 percent. The core business of ASMPT and the SMT business of ASM Assembly Systems also complement each other in their regional distribution. Via the SIPLACE team, ASMPT, which was previously active mainly in Asia, was able to expand its market shares in Europe and America to significantly more than 20 percent. According to W. K. Lee, the ASM Group also improved its access to large international companies in the electronics industry considerably thanks to the acquisition of the SIPLACE team. "At the same time, the SMT business benefited from our excellent relationships with customers in northern and southern Asia," explained the CEO. "The progress we have already made and the various success stories are very impressive - both internally with regard to our employees and our management, and externally with regard to our customers, business partners and analysts."

Claim to leadership underscored
W. K. Lee also underscored the synergistic potentials in terms of technology, market access and organization: "Its integration as a separate business unit gives the SIPLACE team the flexibility and maneuverability it needs to operate successfully in the market. Joint teams are working on putting these synergies with regard to technologies - for example in LED production or placement directly from the wafer - to use in new developments. In addition, initial projects to coordinate our purchasing of jointly used materials and components promise to improve our cost situation. We are also focusing on insourcing some production steps which were previously handled by others. These measures substantiate our expectations for more customers and market shares for SIPLACE. We also express this quite intentionally with our integration slogan of ’Together #1’."