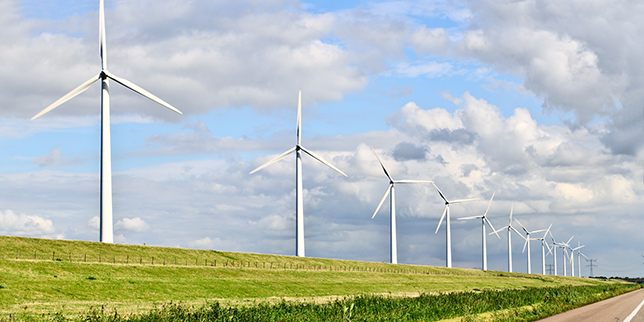 With a couple of key wind energy projects implemented in the small town of Kovacica, the northern Serbian province of Vojvodina now ranks among the top current country regions developing renewable energy solutions. The 104 MW wind farm (with 38 turbines) which is soon getting commissioned is Serbia’s second large-scale wind energy project. The construction of the facility began less than two years ago. The project sponsor and developer Enlight Renewable Energy was provided with a total of EUR 48,8 million financing by the European Bank for Reconstruction and Development (EBRD).

The other big renewable implementation in the town – the wind farm Cibuk1, is also funded by the EBRD and is the largest one ever constructed in the country and the wider Western Balkans region, the Bank announces. The company that implemented the Cibuk project is Vetroelektrane Balkana.

EBRD is financing a major renewable energy programme in Greece

“The Cibuk wind farm is fully constructed. It boasts 57 wind turbines with a total capacity of 158 MW, built in Kovin, also in Vojvodina, and only 65 km away. Both wind farms have started producing electricity and are now in the final phase before they can be officially connected to the grid”, the official press release by the EBRD further added. The Bank and the International Finance Corporation supported Cibuk with a 215 million euro syndicated loan.

In Serbia, where the electricity supply is largely provided by ageing coal-fired plants running on lignite, one of the dirtiest types of thermal coal, reducing air pollution is a significant achievement. Thanks to these pioneering projects, Serbia is approaching its pledged objective set by the National Renewable Energy Action Plan which created a national binding target of 27 per cent share of renewable energy in overall energy consumption by 2020.

“Every time a turbine turns, it produces enough electricity for one household for 24 hours and it turns 6-7 times in a minute. There is no CO2 emission and this 100 per cent clean energy is the main benefit of wind farms,” Tomer Nir, a part of the Kovacica project implementation team, explains. The two wind farms combined will produce electricity for close to 180 000 households, while reducing CO2 emissions by more than 600 000 tonnes annually.

“Investment in renewable energy is at the core of our energy strategy. It is particularly important for the Balkan region, which until recently has depended heavily on coal for electricity generation. We are very pleased to see Serbia making such a strong commitment to renewables, and to have been able to support that commitment,” Harry Boyd-Carpenter, EBRD Head of Energy EMEA, said.

“The Cibuk and Kovacica wind farms are a breakthrough for Serbia’s renewable energy sector. The EBRD has worked closely with the government to develop and refine the regulatory framework for the sector and these efforts have unlocked the first wave of renewable energy projects,” Zsuzsanna Hargitai, EBRD’s Regional Head of Western Balkans, added.

“Being at the forefront of this process was the most interesting side of it for me. Before, there were several smaller wind farms of 10 or so MW, but different legislation applies to them. We had to go through a lot of hoops to make it all work,” Zeljko Duric, director of Vetroelektrane Balkana, explains. Apart from clean energy, the two wind projects provide new job opportunities and knowledge which the country has lacked so far. Before Cibuk, it was a challenge to find a local expert in wind farms. The project has helped provide experience for more Serbian engineers, the EBRD clarifies.

“The government is trying to encourage education and a knowledge-based economy. Experts in environmental protection and legislation will be more and more required, as Serbia is transforming itself in line with the EU accession process. We have to ensure first that everything works and then we celebrate. Cibuk is at the forefront of wind energy development in Serbia. It helped establish good practice which provided confidence to the authorities.

All the initial doubts have been dispelled”, Zeljko Duric added.
The pioneering Cibuk and Kovacica projects are assisting the state in building its administrative capacity to develop solutions in this new industry. Meanwhile the government is supporting the move towards renewables, but the administrative procedures for renewable energy projects in Serbia are still developing.