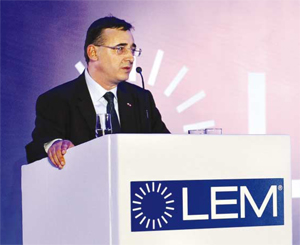 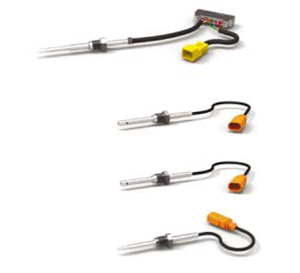 Delta Instruments
Delta Instruments is a producer and supplier of measurement and control instruments and systems for industrial applications. Its basic products are different types of industrial transmitters, controllers, process-indicators, sensors and other measuring devices for temperature; pressure and differential pressure; flow of liquids and gases; level of liquids and bulk materials; humidity; gas concentration, etc.

LEM is a mid-size, global company with approximately 1’200 employees worldwide. In addition to Sofia (Bulgaria), LEM has production sites in Beijing (China), Geneva (Switzerland) and Machida (Japan). Regional sales offices are close to the customers’ locations and the company offers a seamless service around the globe.

In October 2013, only six months after the launch of a new site, LEM Bulgaria commenced production of the LAH transducer - a product with various applications in home appliances, variable speed drives, UPS’s, SMPS’s and air conditioning.
In recognition of the successful start of LEM Bulgaria, the company was awarded ’Investor of the Year 2013’ in Bulgaria in the Electro-technique and Electronics sector.

MICROSYST
Bulgarian company MICROSYST is a manufacturer of large variety of technical systems for automation of production processes. It has its own facilities - commercial and production, located in Plovdiv, Bulgaria and equipped with precision instrumentation, test, computer and office equipment, machines and tools to ensure the manufacturing and trade activity of the company.

Microsyst also has an Аccredited laboratory for calibration of measuring devices equiped with top tier calibration and measurement instruments for temperature, pressure, humidity and process signals as well.

NAKRA
NAKRA was established in 1990 in Radnevo, Bulgaria. The main activity of the company is design, engineering and delivery of control-measurement gauges, cables and equipment for industrial automation. NAKRA performs assembly and puts into operation systems for automated control. In 2010 the company started production of temperature sensors for the industry and now it offers most of the main types of thermocouples and thermoresistors.

Its partners are European and world producers and suppliers of gauges, cables and equipment for flow, temperature and pressure measurement as well as industrial automation NAKRA.
The company has a modern base in Radnevo with 500 m2 storage areas, a mechanical workshop, three laboratories equipped for testing and repairing of gauges for technological measurements - temperature, pressure and industrial automation.

Sensor-NITE Industrial
Sensor-NITE Industrial, headquartered in Sofia, was established in 2005. The company offers high temperature sensors for the automotive industry. It has sales offices situated in Germany, Italy, China, Korea, India, and the USA. Among its most prominent clients are the largest automotive manufacturers such as Volkswagen-Audi Group, Daimler Car and Trucks, General Motors, FIAT Group, Volvo Car and Trucks, Iveco, Daewoo, Chrysler, Mitsubishi, Suzuki, Ford,etc.

Sensor-Nite works in compliance with the highest quality standards demanded by the automotive industry. The fast-moving development of the company along with the large-scale expansion on production basis is letting us provide career opportunities to specialists from different engineering fields as well as to professionals in finance, logistics and customer care area.

Sentera Controls
Sentera is a manufacturer of controls for the HVACR industry. More specific, it is specialized in the speed control of electric motors of fans and/or pumps. Subcontracting services of the company includes a complete printed circuit assembly service. Sentera is fully equipped to assemble conventional (through hole) and surface mount (SMT) components and also a combination of both technologies.

In addition to the Bulgarian market the production is exported to foreign markets such as Turkey, Russia, Macedonia, Ukraine, Poland, Austria and others. The produced sensors have a number of Bulgarian and international certificates. STS Electronics comply to ISO9001:2008 and other European certificates. Despite increasing product quality, the team’s efforts are focused on continuous improvement in technology and quality.

Vector-1
Vector 1 - Plovdiv produces various types of sensors - temperature, humidity and level sensors.
The temperature sensors are: semiconductor sensors to 125 ? C with analog or digital output;  RTD  Pt100, class A and B ( DIN EN 60751 ) up to 600 ?C; thermocouples J and K, class 1, 2 ( ASTM E230)  up to 1050 ?C. The construction of sensors is from stainless steel. According to the construction these sensors are with PVC, silicone or glass insulated cable; with protection head; temperature inserts; special design on request.

Vector 1 offer noncontact infrared temperature sensors with different ranges, outputs and constructions. Relative humidity sensors for air and gasses have a range from 0Е100% RH and high accuracy. Operating temperature:  (-20 ... +85) °C. The humidity sensors have built-in sensor for temperature compensation and are applicable to dusty environments.

Vector 1 also produces conductive and float level probes. Conductive sensors have different design and lengths of stainless steel electrodes. Float level switches consist of reed relays, built into the stem of the level sensor, that are triggered by the movement of a float. The floats with a permanent magnet are made of polypropylene or stainless steel. They are used for measuring the level of a relatively clean fluid, and are particularly useful in the foaming liquids.

Bulgaria has an important place in LEM’s development strategy

Mr. Borisov, the first plant of the Swiss company LEM in Bulgaria started its production at the end of October 2013. What is its focus?
LEM is the global market leader in providing innovative and high quality solutions for measuring electrical parameters. Voltage and current transducers are used in a wide range of industrial and automotive markets. In fact, we come across LEM sensors everywhere in our everyday life, but we don’t always see them.

What had prompted the decision for this investment? Why did Bulgaria attract the attention of manufacturers such as LEM?
LEM’s decision to invest in Bulgaria is not accidental. The main advantage is that in recent years the country has been recognised as one of the most financially stable countries in the European Union. This is due to the fact that Bulgaria has a currency board and the Lev is pegged to the Euro. This results in less dependence on currency fluctuations and risks for the business.

What’s more, Bulgaria is a country with traditions in similar kinds of production, so technicians used to such a high engineering culture will be able to offer new ideas and improvements for the future of the company.

Last but not least, the production costs in Bulgaria are not comparable to those in Western Europe or Japan, which is leading to increased competitiveness.

Where is the new production facility and what is it capacity?
The new production base is located in Sofia, Iliyantsy district. LEM’s plant has nearly 5,000 square meters of production area with developed infrastructure which meets the current requirements for  modern electronics production. Currently LEM Bulgaria has nearly 50 employs, but in the next few years their number will increase to 400.

What advanced technologies and equipment are currently implemented in the production and from which suppliers?
Our first production facilities were transferred from Switzerland. The machinery and equipment are at a very high technology level - some are fully automatic, others are semi-automatic, but all of the process is fully controlled. And as for our suppliers - we will naturally continue with those outside Bulgaria, but in parallel we will work on the evaluation and validation of local ones.

What is the planned market for the products manufactured in the new plant?
Like I said, LEM is a world leader in the field and has production facilities in Switzerland, Japan, China, and now in Bulgaria. At the same time we have a trade network and offices worldwide. This means that we produce and export LEM sensors worldwide.

What is the role of this investment in the overall policy of LEM? What are your intentions for the development of the local market?
LEM Bulgaria is the newest factory of LEM Holding SA and will be developed to its full capacity in a relatively short time. This means that LEM Bulgaria has an important place both in the present and in the future strategy of LEM. Gradually LEM Bulgaria will become the basis for future expansion of both our European and global markets. This, together with good technical potential, determines LEM Bulgaria as a key factor in the future of LEM.