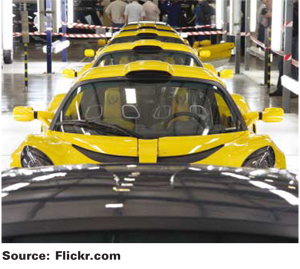 Automotive companies on the rise, the latest SEE News ranking of the market leaders shows

The edition has been making this ranking for eight years. 2015 is the first year in which an energy company does not rank as no. 1 in the region. This year, the largest company in the ranking SEE News Top 100 is the Romanian carmaker Dacia, a subsidiary of France’s Renault.

The traditional leaders in the ranking - companies dealing with oil, gas and electricity are slowly but surely losing ground, though they still dominate the list and it probably will stay this way for a long time, SEE News notes.

Meanwhile car manufacturers are gaining momentum rather quickly, mainly due to the rapid recovery of the export markets. Expectations for this industry are good, especially given the increasing economic growth in the region, rising consumer spending and the higher incomes. Another sector that climbs in the ranking is trade.

The IT sector and agriculture in the region attract more investors and SEE News is expecting that in the near future companies representing those sectors will also enter the rankings. Economic growth is accelerating, the report shows. Domestic consumption and exports are picking up as activity in the euro area gains momentum, investment flow is strengthening and the M&A market is warming up. The companies are investing heavily as confidence is returning. New players from diverse sectors are entering the ranking, SEE News notes.

Automobiles, car parts makers speed up SEE TOP 100 track
Over the past years the automotive industry has been steadily expanding its presence in the SEE TOP 100 ranking. After a breakthrough in 2013, when it ended up as the fourth biggest industry in the region, it is firming its positions with the car makers in this year’s edition posting 8.0 billion euro in combined revenues.

The combination of low production costs, skilled workforce and a suitable location that enables access to strategic markets has spurred its growth. Five automobile makers, three manufacturers of car parts and two rubber and rubber products makers, whose core business is manufacturing of car tires, made it into this year’s edition of the SEE TOP 100 ranking.

One of the two car tire makers, Romania’s Continental Automotive Products, is also among the most profitable companies in the region with a 21% return on revenue. The industry’s top performer is Romanian car maker Automobile Dacia, a unit of France’s Renault, which has overtaken OMV Petrom as the biggest company in SEE.

Oil and gas and electricity companies
With combined revenues of 40.6 billion euro, the oil and gas companies continued to dominate the SEE TOP 100 ranking, as this is particularly noticeable in the upper end of the table. However, their revenue remained flattish, whereas their combined net profit dropped to 263 million euro from 979 million euro.

In tune with this trend, the biggest oil and gas company in the region, OMV Petrom, ceded the no. 1. position it had been holding for six years. The company saw its revenues fall only slightly but its profit more than halved. Oil and gas companies occupy eight of the top ten positions in the ranking. The number of oil and gas companies that made it into the SEE TOP 100 ranking dropped to 27 from 29 a year earlier.

Economic growth in SEE is expected to quicken
Another industry to put up a good performance was pharmaceuticals, with combined revenues of 2.5 billion euro, up by 7.6% and an 11.7% return on revenue, making it the third most profitable industry in the region. A total of 15 new companies made it into the ranking. Romania, with a population of around 20 million and robust economic performance, stands out as the undisputed market leader in the region, placing 53 companies in the ranking. Slovenia, with 13 representatives, outranked Croatia and Bulgaria which had 11 each.

In solid recovery mode, economic growth in SEE is expected to quicken as consumer spending, exports and investment continue to recover, real disposable incomes rise and general business sentiment improves. Romania, where planned tax cuts will further improve the business environment, will remain the frontrunner with GDP growth seen at close to 4%.

The economies in the region are also expected to benefit significantly from lower oil prices and substantial support from EU structural funds. Indications that the prospects before the region are improving are also visible on the M&A market, based on the deals announced since the beginning of 2015.

ICT is emerging as one of the most attractive sectors for foreign investors, alongside manufacturing, retail and financial services. Growing domestic consumption and personal income are likely to benefit first sectors such as retail and wholesale, SEE News’s report stated.

The most profitable industries ranking
The rubber and rubber product makers in Southeast Europe, represented by two car tire makers in the SEE TOP 100 ranking, have dislodged the pharmaceutical firms from the top spot in the most profitable industries ranking for 2014, recording a return on revenue of 14.19%.
Furniture, a newcomer in the rankings, took the no.2 place with 13.83% return on revenue, leaving last year’s leader in the third spot with 11.71%.

Little has changed in the top five spots on the 2015 SEE industrial ranking since its previous edition. The petroleum/natural gas industry kept its comfortable lead with total revenues rising 0.04% to 40.58 billion euro. Despite the growth in revenue, the sector recorded the biggest drop in net profit - of 716.5 million euro to 262.5 million euro.

The oil and gas sector has also an impressive footprint in the SEE TOP 100 companies ranking, where nearly one third of the companies hail from the sector, while at the same time holding spots from no.2 through to no.7. Electricity ranked second in the SEE industrial ranking, staying way below the total revenue of the leading industry at 15.3 billion euro.

The automobiles sector recorded a jump in total revenue of 7.1% to 8 billion euro, managing to extend the steady rise in revenue over the past couple of years. The companies coming from this industry also returned to profitability in the 2014 rankings, recording a net profit of 84.9 million euro after posting a combined net loss of 30.5 million euro the previous year. 2014 was the first in the last seven years to see growth of registrations in the EU.

Telecommunication companies are still losing ground in terms of revenue. The combined revenue of the seven representatives of this sector in the SEE industrial ranking fell 2.12% to 5.1 billion euro in 2014, while their combined net profit plummeted 26.9% to 432.3 million euro with the sector continuing to face market saturation and new EU regulations. Still, telecommunications remained in the fifth spot of the most profitable industries with 8.45% return on revenue while also maintaining the same spot in the 2014 SEE industrial ranking, the report shows.