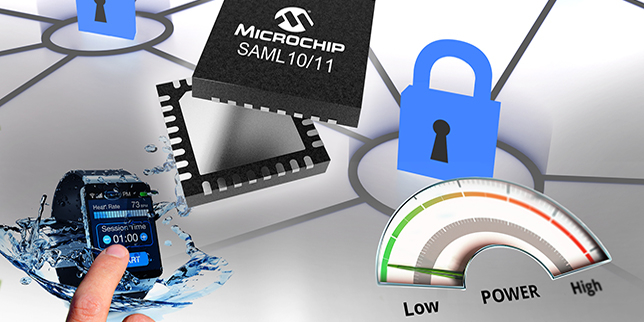 With the rapidly accelerating growth of IoT endpoints and increased concerns around security breaches, design engineers are looking for solutions

As the connectivity and embedded intelligence of smart devices becomes commonplace across many industrial, commercial and domestic applications, the Internet of Things is starting to become engrained in our everyday lives. From the ubiquitous smartphone and fitness wearables to smart speakers, virtual assistants and home/building automation devices/systems, smart energy networks to industry 4.0-enabled machines and factories, even the development of autonomous vehicles - all of these are being enabled by the IoT, and soon it will be hard to imagine life before the IoT era. Gartner have predicted that there will be 20 billion IoT-connected devices by 2020 - and that IoT product and service suppliers will generate revenues of $300 billion.

This explosion of billions of wirelessly connected devices demands technology infrastructure that can handle massive increases in computing power, storage and bandwidth, delivered by low cost, compact and ultra-low power hardware. But as these IoT devices collect more and more data, how we treat and protect that data also becomes more important - and a quick review of 2018 lists of the top IoT trends according to Forbes, IBM and IDG ComputerWorld reveals that security is a common thread. Nicole Eagan, CEO of cybersecurity firm, Darktrace, told 2018’s Wall Street Journal CEO Council Conference how a casino’s high-roller database was hacked via a smart thermometer in an aquarium in the lobby.

With the rapidly accelerating growth of IoT endpoints and increased concerns around security breaches, design engineers are looking for solutions that help reduce power consumption while adding robust security. Enter Microchip, manufacturer of microcontroller, memory and semiconductor devices, with its new SAM L10 and L11 MCU families. These 32-bit MCUsattempt to solve these twin challenges by integrating a wide variety of peripherals into the industry’s lowest power MCU in its class, as well as incorporating a broad array of hardware and software security features, protecting against the dual risks of exposing intellectual property (IP) and sensitive information.

This allows designers to develop secured applications without the battery constraints of less power-efficient MCUs. The new MCU families are based on the Arm Cortex-M23 core and run at 32 MHz, with memory configuration of up to 64 KB Flash and 16 KB SRAM. They boast ultra-low power consumption, as well as an enhanced Peripheral Touch Controller and advanced analogue features, withthe SAM L11 variant adding integrated hardware security. They both come in 24- and 32-pin package options and are targeted for use across IoT and security, low power, capacitive touch and general purpose embedded control applications.

Both MCU families offer the industry’s lowest power consumption, allowing developers to create extremely power-efficient designs. When benchmarked for power consumption, the SAM L10 received a ULPMark score of 405, 200% better than its nearest EEMBC-certified competitor. Built with proprietary picoPower technology to provide flexible power saving modes across all active and sleep modes, the MCUs are supported with power debugging and data visualiser tools to monitor and analyse power consumption in real time. This helps developers to rapidly optimise their system design for lower power consumption, with significant improvements in battery life.

They also feature Microchip’s latest-generation Peripheral Touch Controller (PTC),allowing designers to incorporate capacitive touch interfaces intotheir applications that offer best-in-class water tolerance and high noise immunity. Four times faster than the previous generation of PTC, it provides highly-responsive and accurate touch sensing and is supported by the QTouch Configurator and Modular Library, making it simple for designers to add elegant touch interfaces to applications that provide an impressively smooth and efficient user experience, even in the presence of moisture and noise, while maintaining low power consumption. The touch interface makes the devices ideal for a myriad of automotive, appliance, medical and consumer Human Machine Interface (HMI) applications.