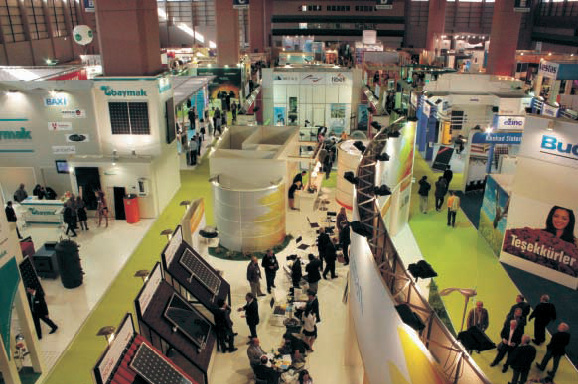 The Renewable Energy Fair organized by Hannover Messe-Sodex took place in the CNR Expo/Hall 1. The debut of the trade fair RENEX 2009 offered Turkish industrialists and investors insights into the entire range of clean energy technology. The accompanying panel discussions and forums highlighted the importance of different sources of renewable energy and the technology required. The event, which received the full support of the Swiss and German governments, attracted 17,258 registered visitors. It proved of particular interest to visitors seeking individual applications and wind energy solutions.
The trade fair occupied an area of 12,000 square metres with 130 stands from 300 companies. In addition to Germany and Switzerland, numerous countries took part, including China, Canada, Greece, Denmark, Holland, Austria, Jordan, Spain, the Czech Republic, Hungary, Italy, Japan and the UK.
Mr. Taner Yildiz, Energy Minister of the Republic of Turkey, Mr. Moritz Leunberger, Swiss Minister for the Environment, Transportation, Energy and Communication, Dr. Heinz Baues, Undersecretary at the North Rhine Westphalia Ministry for Energy and SMEs, attended the trade fair, which represents an important opportunity for industry professionals.

Investments in green energy are investments in future
Turkey’s Energy and Natural Resources Minister Taner Yildiz attended the opening ceremony, where he reported the good news that legislation on renewable energy and energy efficiency was imminent. In his speech he explained: "Trade fairs are good platforms for important contracts and investment. We can only live up to our promise to leave a good country to future generations if we ensure the existence and use of clean energy resources. If we don’t clear the way for clean energy now, the measures taken to combat climate change will not be sufficient. Investment in this technology - plus the right know-how - will be an investment in the future. Turkey has huge potential with a capacity of approx. 44,000 megawatts of wind, geothermal and solar energy. We have demonstrated our commitment by introducing the Renewable Energy Law and the Energy Productivity Law. Now it is time for these laws to be realized."
Moritz Leuenberger, Switzerland’s Minister for the Environment, Transportation, Energy and Communication, stated that environmental pollution and climate change are the biggest challenges facing the world today. He emphasized the importance of policy-makers coming together to ensure fair agreements and effective projects and solutions that will benefit future generations.
Dr. Heinz Baues, Undersecretary at the Ministry for Energy and SMEs in North-Rhine Westphalia, also underlined the importance of this cooperation, adding: "We are applying these technologies to survive. Our priority is to reduce carbon dioxide emissions by 28%". Murat Demirtas, Chairman of the Board of Directors of Hannover-Messe Sodeks Fuarcilik A.S., said that although investment had come late in the day, there would be a fast take-up of green energy.
The main sponsor Sekerbank was also represented, together with Eko kredi, thus demonstrating the firm commitment to energy conservation. The visitors were briefed at their stand with relevant brochures and leaflets.

Clean energy a focus of discussion
Clean energy was discussed during meetings involving representatives and experts from Germany and Switzerland. On Saturday, November 7, the clean energy meeting was held at the World Hall from 4.00 - 5.30 p.m., offering a platform for lively debate and reports on experiences, problems and expected future developments in clean energy and energy applications in Turkey. The keynote speakers were Dr. Baha Kuban, lawyer Asli Aydinoz, electronic engineering expert Fatih Kavaslar, chemical-environmental engineer Ates Ugurel and architect Dr. Mehmet Bengu Uluengin.
The trade fair was held in conjunction with the 4th Turkish-German Energy Symposium ’Renewable Energies and Efficient Energy Use’ and the 5th Switzerland-Turkey Economy Forum ’Renewable Energy Sources, Productivity in Energy and Resources’. After these meetings, representiatives of German and Turkish companies got together in unilateral talks.
RENEX 2009 was also attended by an important Indian trade delegation supported by the Indian Ministry for Micro, Small and Medium Sized Companies, thus adding to the opportunities for networking and contact between exhibitors and other professionals.

Accompanying Programme
The Swiss Chamber of Commerce and the Swiss Consulate accompanied the RENEX 2009 fair with the 5th Swiss-Turkish Economic Forum on "Renewable Energy Resources". With the support of the Federal State of North Rhine-Westphalia, "NRW International" organized the participation of small and medium-sized enterprises at RENEX 2009 fair. Contemporaneously with RENEX the department for the Promotion of Foreign Trade and Investment organizeed the 4th Turkish-German Symposium on Energy which was concerned with "Renewable Energy and Energy Efficiency". On 5th November, the programme started with lectures and discussion groups in solar energy, geothermal power, and energy efficiency. On 6th November, the main focus was on wind power, and on 7th November participants had the opportunity for cooperation talks.

Right Time to enter Turkish market
According to OECD reports Turkey’s average economic growth rate is forecasted at a steady 7.2% per year up to 2012. Particularly by the expansion of industrial capacities and - in parallel to the increase of the living standards- the rising energy consumption of households an increase of energy demand is estimated of 7.5% to 8.2 % annually for 2008 till 2015. Already for 2009 is a supply shortfall expected. Medium term plans are constructions of about 500 new hydroelectric plants. According to information of the Turkish Ministry of Energy, the rapidly rising demands require investments of at least US $ 3 billion per year.
The government plans the extension of electricity production through the use of alternative energy sources like wind and solar energy, energy from biogas and biomass, geothermal energy and hydropower (with a water reservoir of a maximum 15 qkm).
Turkey is after China, Japan, the United States and Iceland- with 170 geothermal heat zones and approximately 1.000 thermal springs in the possession of the world’s fifth largest potential of geothermal energy (Rank 1 in Europe), which leads to high investments of the government.

Investment in Energy Sector: 7.1 billion Euros for new wind energy plants until 2014
Within the next few months, six new wind energy plants with a capacity of around 240 megawatts will start operating in Turkey. The Turkish Energy Market Regulatory Authority (EPDK) expects around EUR 7.1 billion to be invested exclusively into wind power until 2014. In Manisa, in Western Anatolia, the installation of a wind energy plant with a capacity of 141 megawatts has already started. The total investment adds up to around EUR141 million.
Under the Turkish sun, solar energy and photovoltaic likewise figure as alternative solutions to conventional energy supply. Time presses as the energy demand of more than 70 million inhabitants is steadily increasing. The same holds true for the industry the growth prospect of which is still good.

A new law on renewable energies
will give wind and solar energy in particular a huge economic boost this year in Turkey. A significant increase in supply volumes is expected as a result, especially with regard to solar energy. The law is currently with the Turkish parliament awaiting signature and is due to be ratified in October of 2009, which will really spur on the market for wind and solar energy. This trend is already clearly evident in the run-up to RENEX 2009. Amongst the companies that have already registered, the clear majority are manufacturers of wind and solar energy systems.
RENEX 2010 will take place from 30 September - 3 October at CNR Expo / Istanbul Fair Center.