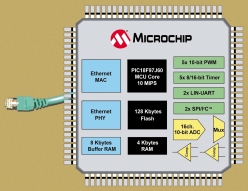 Remote monitoring and control of home appliances is becoming a reality
with support from a range of communication protocols.

Functionally, the control-panel and display designs of appliances have not changed much in the past several decades. Each appliance still has a control panel consisting of knobs and buttons, and some type of display. The implementation of these inputs and outputs may have improved during the transition from mechanical to digital, but consumers still have to walk up to these appliances to control them and monitor their activity. So isn’t it about time to connect these appliances to the Internet and empower consumers to access them from anywhere, anytime?
Imagine a control and display system that can be accessed from a web browser. The consumer could access these appliances from a PDA, a cell phone, or a computer. In this manner, the consumer could check whether they have left the stove on. In the event that an unsafe temperature or level of smoke is reached, the stove could send an SMS message to a cell phone - allowing the consumer to turn off the stove and/or activate a fire-extinguishing system.
The safety implications for remote monitoring and control of home appliances becomes obvious when considering that, between 1999-2002, there were 114,000 reported home fires, associated with cooking equipment, every year in the US, resulting in 290 deaths and 4,380 injuries annually (source: National Fire Protection Association). In addition to increasing safety, consumers would also benefit from more convenience and higher efficiency.
The remote access capability is not a replacement for traditional control panels and displays, as it would still desirable for consumers to retain the conventional hands-on control of each appliance. Additionally, the adoption rate for networked appliances is dependent on the network infrastructure and availability. According to a recent survey, 42% of EU households now have a broadband connection, which is an increase of 12% on the 2006 figure. This is a promising trend, as it shows that more European households are going online and wanting their homes to be a part of the digital world.
Controlling and monitoring home appliances consists of both home automation and home entertainment. An entertainment appliance, such as a digital TV, has a high data-rate requirement, and therefore would need a different networking medium than a light bulb. Some of the available networking technologies include Ethernet, HomePlug power-line communication, 802.11 Wi-Fi, and IEEE 802.15.4 ZigBee, low data-rate RF communication. Ethernet and Wi-Fi are used widely for networking computers. A wired solution such as Ethernet may be desirable over a wireless choice when designing an appliance with a large amount of metallic components, since the wireless signal has poor penetration through thick metal. In the absence of an Ethernet port, power-line communication could be used. However, the data rate for this technology is still very low. ZigBee is intended to be used in wireless applications requiring low data rates and low power consumption. A ZigBee-to-Ethernet or Wi-Fi bridge is probably needed for interconnecting the different elements, as shown in Figure 1.
Choosing a higher data rate option often translates into a higher implementation cost. Each designer has to balance the product requirements against the cost of implementing them.
Regardless of the different networking technology deployed, the higher-layer software protocols ultimately tie all the devices together; allowing them to interact and communicate with other Internet devices. Some of these protocols include IP, TCP, and UDP.
The higher-layer protocol should also provide secure access to each of the devices to prevent strangers from being able to start and stop home appliances, or open and close the garage door. Security could be implemented using an HTTP server on an appliance device. A user would remotely access that device by typing the URL or IP address of the server. A login page would then authenticate the user, before allowing access to control and monitor the appliance. The user interface could be GUI-based or text-based, or both.
A GUI interface could be built from simple HTML icons or an image map with ‘hot spots’ for accepting commands. A script can also be included for the Web browser that would periodically poll the server for new status information. A text-based interface, such as a Short Message Service (SMS) bot, could simplify access from a small Internet device, such as a cell phone. Using these Web-based technologies reduces the design cost for implementing a proprietary remote-control device. It also offers a greater level of integration among devices from different manufacturers.
Implementing these network solutions has become easier as silicon manufacturers offer a more integrated solution. For example, an embedded Ethernet device can now be implemented using just one microcontroller with an integrated Ethernet interface controller (See Figure 2). A free TCP/IP stack is also typically included to complement the hardware solution.
As the solution cost becomes more economical for the mass market, more appliances and other household devices could integrate networking capability. No one connectivity solution alone will be able to meet the wide-ranging application requirements. rather, a combination of Ethernet, HomePlug, Wi-Fi, ZigBee, and other emerging technologies can deliver an optimal integrated solution. Providing the ability to remotely control and monitor appliances would increase both safety and free time, saving consumers from doing time-consuming chores and leaving them with more time to do the things they enjoy.