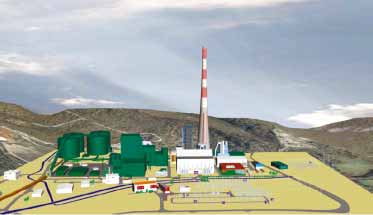 EBRD finances the reconstruction of the water supply network in Sarajevo

EBRD improves stability of the power system in Bosnia and Herzegovina

The purpose of the project is to build a long-term, safe and stable source of electricity. The replacement unit will have a capacity of 500 MW at the generator, instead of the existing 125 MW at the generator. After the reconstruction, the existing capacity at site in the order of 335 MW will be increased to 710 MW. The start-up of the replacement unit is planned after the shutdown of unit TPPP 1.

Purpose of construction
The Project includes the reconstruction of TPP Plomin - replacing the existing TPP Plomin 1 (TPPP 1) - aimed at modernization and capacity increase. The purpose of the respective project is to construct a long-term safe and stable source of electricity. The replacement unit (TPPP C) will have a capacity of 500 MW at the generator, instead of existing 125 MW at the generator. After the reconstruction, the existing capacity at site in the order of 335 MW will be increased to 710 MW. The start-up of TPPP C is planned after the shutdown of TPPP 1. Project developer is Hrvatska Elektroprivreda d.d. (HEP d.d.), Zagreb. Electricity consumption in Croatia is increasing at an average annual growth rate of 1.7% (2004 to 2009), while imports amount to 22-35%. By the year 2020, certain power plants being a part of the Croatian energy system will be shut down as they reached the end of their life cycle, and some of them will be forced to shut down before it is planned or economically justified in order to meet EU regulations on emissions.

The share of coal in electricity generation in the world is 35% (in the EU15 it is over 30%). Unlike oil and gas, the main advantage of coal comes from the security of supply due to large stocks evenly distributed in politically stable countries (mostly in the OECD countries). Coal will remain an important fuel for electricity generation at global and regional scale, even when taking into account the commitments to reduce CO2 emissions that will arise from global agreement for the post-Kyoto period. It concerns the so-called new ’clean coal technologies’, with a high energy efficiency of fuel energy conversion into electricity.

In 2010, coal met 12% of electricity demand in Croatia. Coupled with the energy delivered from NPP Krsko, a total of 14,674 GWh was generated, out of which 641 GWh in TPPP 1 and 1,510 GWh in TPPP. With the generation of TPPP C, it is expected that the share of coal fired thermal power plants in Croatia in 2016 will be about 22%.

Project characteristics
The planned project implies the modernization and capacity increase at Plomin thermal power plant’s site, through the replacement of TPPP 1 and the reconstruction and/or replacement of common buildings of thermal power plants Plomin 1 and 2. The replacement unit TPPP C, with the appertaining infrastructure, will be located at the existing TPPP 1 and 2 site, the area that mostly belongs to the municipality of Krsan, and to a lesser extent (the coastal edge of the Plomin bay) to the City of Labin.

TPPP C is designed fully in accordance with the principles and recommendations arising from the EU guidelines on the application of best available techniques (BAT) for large combustion plants. The term "Best Available Techniques" is the guiding principle of EU Council Directive 96/61/EC (2010/75/EU) on Integrated Pollution Prevention and Control (IPPC) in terms of "the most effective and advanced stage in the development of activities and their methods of operation which indicate the practical suitability of particular techniques for providing in principle the basis for emission limit values designed to prevent and, where that is not practicable, generally to reduce emissions and the impact on the environment as a whole."

As for the environmental burden, this power plant can be classified into so called ’near zero emission’ power plants, according to the framework categorization used by the Coal  The accommodation of a coal-fired TPPP C on a site belonging to the existing power plants TPPP 1 and 2 and their auxiliary facilities was considered which, without a substantial expansion of the surrounding area, requires a reorganization of some existing systems and facilities.

TPPP C is designed as a condensing unit with a capacity of 500 MWe at generator terminals, with pulverized coal combustion in the area and supercritical steam parameters (PC-SC) of 300 bar and 600 °C, with single steam reheating at 600 °C. While selecting technical solution, numerous power plants in the world have been analyzed and the Torrevaldaliga thermal power plant in Italy was chosen as a reference plant.

Seven companies expressed their interest in Plomin C TPP
At September 14, 2012, the deadline has expired for the submission of the Expressions of Interest for partnership cooperation in the construction and operation of Plomin C TPP. Seven companies expressed their interest, for which HEP estimates that they are capable of meeting business interests and improving professional and business competences in partnership with HEP. By September 28, HEP will draw a list of potential partners who will be invited to submit binding bids by the end of this year.

The selection of the Strategic Partner will be made in accordance with published criteria, with particular regard to the level of participation of domestic companies in the project.