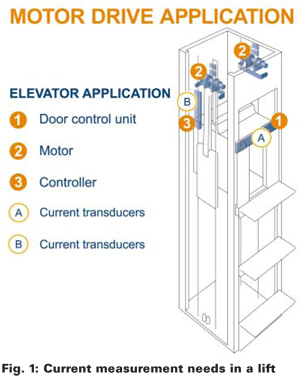 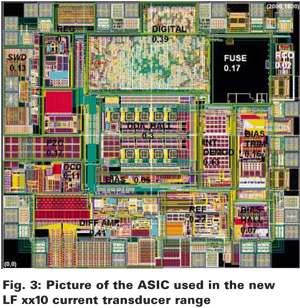 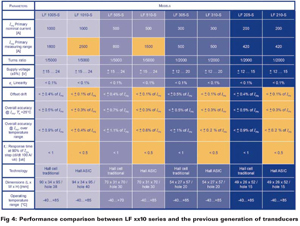 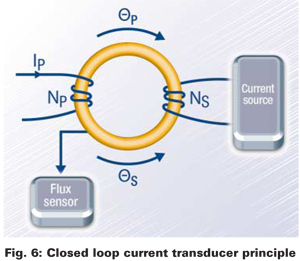 Varianti: We aim to implement orders as quickly as possible with minimum deviation from the set parameters

Whatever your application, intelligent power control optimises the use of electricity and ensures smooth control of equipment. For instance in machine tools, the current flow increases abruptly when the tool starts working on the part to be machined.

The better and faster the feedback signal, the smoother the control of equipment operation. Intelligent power control is also a way of optimising the use of electricity. Upgrading variable speed drives of electrical motors brings substantial energy savings.

A fine control of current, no matter what the operating temperature, is able to provide substantial energy savings of up to 30% or more and improves speed and torque control.

More comfort and/or precision
The problem of torque ripple minimisation in synchronous motors is a challenge for engineers and there are constant efforts made to reduce it. The new LEM LFxx10 current transducer family improves current measurement accuracy across the whole operating temperature range, dramatically improving the drive’s torque ripple performance.

Previously, it was difficult to maintain consistent current measurement gain across the three phases of a motor drive due to accuracy variations among traditional current measurement sensors. This accuracy variation can result in excessive torque ripple. The LFxx10 family’s extremely high measurement accuracy reduces torque ripple, allowing more comfort for elevators, locomotives or other transport applications, as well as allowing highest dynamics and positioning precision for machine-tools, robots and other automation applications.

Energy savings
The LFxx10 family higher current measurement accuracy also enables better motor control efficiency. Energy savings are being driven by the gradual adoption of the new energy-related directives (ErP) for electrical motors. IE2 efficiency was imposed in 2011 and IE3 is required for small motors from 2015, with an extension to motors up to 7.5kW in 2017. The most cost-effective solution to reach these standards is to use a high-performance drive controller, with high current measurement accuracy

Size reduction
Often we speak about space saving as a trend, but this trend is now becoming a requirement. For example, machine room-less elevators are designed so that most of the components fit within the shaft containing the elevator car. A small cabinet houses the elevator controller and the motors, as well as the inverter.

Everything must be compact, which means that it is not possible to use components that may have to be derated due to their proximity to others. For example, it is important to guard against unexpected behaviour by providing immunity against magnetic fields generated by other components that might perturb the operation of a current transducer.

The position of the lift versus the floor when the doors open, independent of the weight in the elevator car and the operating temperature, must be perfect to avoid any accidents when stepping out of the cabin The current measurement ensures that the motors are powered with the correct current to ensure all of that whatever the environment and operating temperature (Fig, 1).

Many other applications face constraints due to immunity: for example modern onshore and offshore windmills, where the electricity produced needs to be fed into and controlled within the power grid. The stability of the current measurement on the grid side over temperature is a key requirement in this kind of application.

Wind power applications demand the robustness and high accuracy that the LFxx10 current transducer family offers.  While the basic application has not changed over the last 20 years, the adoption of permanent magnet generators and the increase in windmill size are raising the demands on current sensors.

Firstly, the introduction of higher efficiency Permanent Magnet (PM) generators is leading to an increase in level current. The traditional double-fed generator requires a relatively low power inverter. In fact, the generator itself is the main power source and the inverter is only controlling the excitation of the generator.

It therefore handles only a fraction of the main power. In contrast, for Permanent Magnet generator, the inverter needs to convert the frequency of all the power, increasing the current to be converted several fold. The LF family is offered in four ranges from 200A to 1000A and can suit most power needs. Additionally, a 2,000A will be released next year.

Furthermore, the bigger size of the windmills (some offshore mills are already at 6MW) is creating electromagnetic challenges. Some manufacturers chose to deal with the increase of power by splitting the inverter into several modules in parallel.

These compact designs enclose several bus bars carrying thousands of amperes and generating very high stray fields. As described hereafter, the LF 510 and LF 1010 models are designed around a partial air-gap which significantly reduces the impact of external fields. This feature is particularly welcomed by engineers working on modular inverters.

Finally, as the power generated increases, improvements in sensing accuracy offer even greater power savings. A good example is the impact of the offset error to the output current. The offset error is the value given by the transducer when no current is flowing at any temperature. It can also be seen as the current flowing when the sensor gives a 0A output. In practice the offset current fools the inverter control loop and is responsible for the generation of a DC current.

Since the windmill is connected to the grid through a transformer, this DC current is blocked and dissipates into the transformer. Thanks to its ASIC technology, the new LF xx10 family achieves an extremely low offset current and offset drift. For example, the LFxx10 offset drift is up to 5 times lower than the previous generation of current transducers LF xx05.

The design features of the new LF xx10 family make it well-suited to support design engineers building windmills that are larger and more efficient than ever before.
With the new LF xx10 family (Fig. 2), LEM brings the performance of a closed loop Hall effect technology-based transducer to the level of a closed loop Fluxgate technology based transducer.

The Hall chip is a dedicated Application Specific Integrated Circuit that uses several high performance techniques (e.g. spinning and specialist IC geometry), some of which were patented by LEM, to improve the offset and offset drift dramatically when compared to previous solutions.
Based on this new ASIC (Fig. 3), a complete current transducer range has been designed to cover nominal current measurements from 200 to 2000A: LF 210-S, LF 310-S, LF 510-S and, LF 1010-S models- with a fifth one, the LF 2010-S, coming out in February 2015, see Fig. 2.

The LFxx10 series breaks new ground, delivering up to 5 times greater global accuracy over the temperature range (from 0.2 to 0.6 % of IPN) versus the previous generation of closed loop Hall effect current transducers, with a maximum offset drift of just 0.1 % of IPN.

Thanks to the partial air gap of the magnetic core (see Fig. 5), the LF 510, 1010 and 2010 models have a very low sensitivity to external AC and DC fields. This allows a more compact design as there is practically no sensitivity to high current conductors near to the transducer.

The LF xx10 transducers have fast response time, with a typical delay (defined at 90% of IPN) against a current step at IPN of less than 0.5ms.

Working principle
For accurate measurement of DC currents, the technology compensates the current QP created by the current IP to be measured by an opposing current linkage QS created by a current IS flowing through a known number of turns NS (Fig. 6) to obtain:

with NP the number of primary turns and NS the number of secondary turns.
To obtain accurate measurement, it is necessary to have a highly accurate device to measure the condition Q = 0 precisely. The aim is to obtain current transducers with the following characteristics:
• Excellent linearity
• Outstanding long-term stability
• Low residual noise
• Low thermal drifts
• High frequency response
• High reliability

To achieve accurate compensation of the two opposing current linkages (QP and QS), a detector capable of accurately measuring Q = 0 must be used, which means the detector must be very sensitive to small values of a residual magnetic flux y (created by the current linkage Q) to achieve the greatest possible detector output signal.

Using this operating principle, together with the new LEM-designed patented Hall effect ASIC (previously mentioned) as the detector, the LF xx10 current transducers bring accuracy to the next level for nominal current measurements from 200 to 2000A (4000A peak), meeting the high-performance demands of the power electronics world and its applications.