Over 9.2 million euro will be invested in waterworks in Croatia 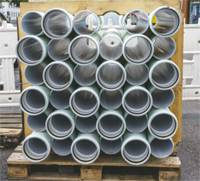 EBRD finances the reconstruction of the water supply network in Sarajevo

Improvements to the wastewater network in the Croatian city of Sisak and neighboring municipalities will be supported by the European Bank for Reconstruction and Development (EBRD) with a 9.2 million euro loan. The funds will be provided to the local water supply and wastewater company - Sisacki vodovod, for the financing of the construction of a new wastewater treatment plant and upgrades and extensions to the municipal wastewater network.

”Sisak is located south-east of the capital Zagreb and has a population of around 47,000. It used to be a leading industrial city known for its steel production, among other things. In March 2013 the EBRD provided a 20 million euro loan for the restructuring and modernization of the famous Sisak Ironworks”, EBRD informs.

The bank has been active in Croatia as an investor since the country’s independence and has invested some 3.2 billion euro in more than 170 projects to date. The Bank’s activities cover all areas of the economy but are especially strong in the infrastructure, corporate, financial institutions and energy sectors.

The EBRD has also worked with the municipality in the past, financing the acquisition of new buses and providing a first loan for upgrades of the wastewater network. Further development of both water supply and wastewater collection and treatment services, which will help preserve the city’s three rivers Kupa, Sava and Odra, is a clear priority for the City of Sisak.

”We are pleased to sign this loan agreement with Sisak Water Company as it underlines our commitment to this important Croatian city. Decent water supplies and well-functioning sewage disposal are preconditions for the sound development of any municipality. In our strategy for Croatia we emphasize our readiness to work with the authorities and the European Union to modernize the country’s infrastructure”, Vedrana Jelusic Kasic, EBRD Director for Croatia, stated.

”I am pleased that we managed to secure EBRD financing, especially funding for the project design and extension of the wastewater collection network in more remote areas of our municipality, such as Pogorelec, Galdovo Kaptolska and parts of Zeleni brijeg”, Kristina Ikic Banicek, the Mayor of Sisak, added.