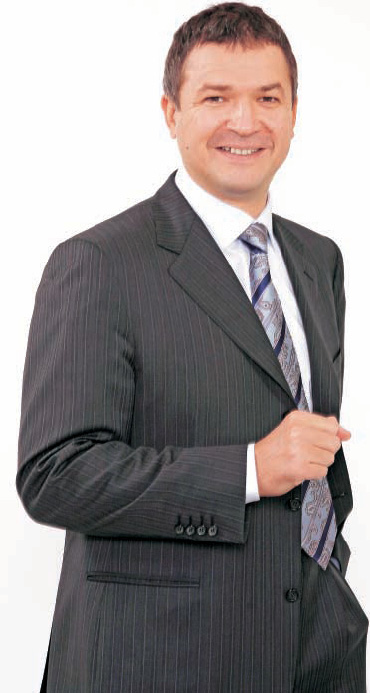 Thomas Franken, Messe Duesseldorf: In the future plastics will no longer be the problem but rather part of the solution

ONDO Smart Farming Solutions, Ilia Iordanov: Automation is the only way to success in agriculture

Plamen Bobokov is among the few prominent Bulgarian entrepreneurs who chose the formula of a business focused on a specific business activity. He is chairman of the managing board of Prista Oil and the supervising board of Monbat. In the past 13 years Prista Oil has established business relations in over 20 countries from the region and the countries with largest presence of the products with the trademark Prista are Bulgaria, Romania, Turkey, Serbia, etc. The company collaborates with leading companies in the petrol and chemical industries as Chevron (Texaco), Valvoline, ERGON, Greenchem, etc. It has its own factories in Bulgaria and Turkey in which are produced lubricating materials, greases, exploitation liquids for automobiles and auto cosmetics. Prista Oil also manages the largest factory for manufacturing of lubricating materials and auto cosmetics in the Republic of Serbia. The company has four terminal control units for storage of base oils with total capacity of over 52 000 I3. As for its future development, it has directed its attention to the countries from Eastern Europe, Central Asia and the Near East.

Mr. Bobokov, will a producer like Prista Oil be influenced by the financial crisis?
For a company focused on its business, which has manifested foresight in connection with the current world financial situation and has taken timely measures, today’s situation has its good sides, too. We used maximally the opportunities offered by the increasing market and tried to eliminate all items with high production costs in our product list. At the moment we are in a process of temporization, we are consolidating our finances in order to be able to react in the best way to the existing situation. Because the whole process is like a pendulum - it has lower dead point of saturation. We foresee when it will possibly be in order to supply ourselves with products which will be at the lowest possible price level. Of course, this can be achieved by companies which, I emphasize this, are focused on their business and are not occupied with hundreds of things, thus being only occasionally engaged in the main part of their business.

Bulgarian model is usually a company, which performs simultaneously totally different activities. Why do you avoid the general trend?
In great business it is not important what people know. What is important is what their organizational abilities are and how many good specialists they know, to which they can assign the responsibility for certain activities. And, respectively, whether they can finance these activities. It also depends on the goal as well as on the strategy of the respective businessman. In general, in our country everybody tries to prove how much greater they are than the rest. But Bulgaria is a too small arena for such act of demonstration - like the big ant in the ant-hill. And when you get out of this figurative ant-hill you see that there are other animals, too - much bigger, which do not even notice you. It is not impossible for great holdings to be managed. Simply everyone chooses his own road of development. We in Prista Oil quickly overcame the ambition to know and be able to do everything. We focused on our two main businesses - oils and batteries - and success came fast. The truth is that what is necessary is persistence, patience, clear strategy and free reign of dreams and thought.
They say that people are as great as their dreams are!
Yes, absolutely! Recently I am focused on our goal to become a great European company. We have strategy about this and have planned for this to happen till next year’s end. We have the necessary resources, the necessary staff, the necessary partnerships and the necessary base. We also have one wonderful financial crisis during which assets become cheaper, i.e. everything we need to turn our mission into reality is available.

What does a large European company mean in the opinion of Plamen Bobokov?
The largest independent producer of oils in Europe. Except the usual "suspects" - enormous concerns, there are about 500 independent producers in our business. Our goal is to be the greatest company of these 500. Lately we work on the realization of this strategic goal and believe that it is completely achievable for Prista Oil.

You will have to increase the production capacities.
In order to be able to afford the dream to be number one among European independent producers you should have already built the respective infrastructure - as resources and materials, as production capacities, you have to possess the respective quality certificates and the recognition on part of your strategic partners.
This is necessary in order to be confident enough to place yourself among the great. And last but not least, you must have reliable financial partners who believe in the realization of your creativity. And also - you must possess courage enough to dream, the boldness to work and the persistence to achieve the set goals.

Will you increase production mainly in Bulgaria or outside its borders?
It is clear that with a pan-European development strategy the increase of production capacities in our country is not profitable. We will also need a base in Western Europe - after all this is the largest market. As for Eastern Europe, it is attractive with the growth rate of its economy.

Is there in our country a working and internationally recognized mechanism for quality certification of oils?
The state standard of Bulgaria has stopped being a criterion long ago. The practice in Europe is that each company or group of companies sets their standards alone. Besides, the American Petrol Institute with its good practices. I should mention here that Prista Oil is member of ASEA and our opinion is taken into consideration when new standards are developed. Unfortunately, this fact which we are reasonably proud of is familiar to very few people in Bulgaria. Of course, there are prestigious international organizations setting the standards in our business and they are most important. But, undisputedly, in the first place is the requirement of the producers of car engines. For this reason a company is serious when it is entered in the register books of these manufacturers. Prista Oil has the approval of almost all manufacturers in the world. We have an accredited laboratory. Everybody may request testing in an European laboratory, too.

Prista Oil has production capacities in Turkey, too. How would you comment the business policy there?
To make business in Turkey is much more difficult. In Turkey there is a license regime for import of almost all types of resources.  I find this view quite backward because it poses serious difficulties to business. It is not easy to work in Turkey. It is a very difficult market. After we succeeded in gaining serious positions there I believe nothing more difficult could happen to us. Because a real company is created by challenges. Of course, Turkey is one of the greatest automobile manufacturers in Europe. Probably it will soon take the lead with heavy-freight automobiles, too. It is also the country with the greatest parking for heavy-freight vehicles. It has very dynamically developing economy, great population and high demand. These are the two opposite sides of the coin. During the past years people there began to talk about liberalization. But, as you know, people there like to talk.
We have a factory in Turkey and a terminal control unit. We even rented a second terminal control unit for an indefinite period of time. In Turkey their state standard is absolutely compulsory, no matter what other certificates you have.

What are your business interests in the Near East?
The region of the Near East is important for our future development. We already work there and I believe that there is great potential to establish good business relations. Furthermore, we have signals from a number of countries in this region which manifest great willingness for the opening of our agencies as well as for mutual business. We were also offered to execute an engineering service.

What about Russia?
I could not promise to comment the market of Russia but I can definitely state that our purpose is to enter it and now we take measures about this. By the end of the present year we have plans to be already present in Russia, buying ready factories. We are also drawing up strategic agreement with a serious partner, which we will announce officially by the end of the year. It is for supply of resources and materials but it is also probably connected with the future development of our activity there. I could say that Russia is the next great challenge before Prista Oil.

In order to realize everything you said you need people. What do you require from your people and what do you give them, Mr. Bobokov?
People are the most important factor for a company. The truth is that Prista Oil is among the few companies in our country which really appreciates its people. We - the shareholders, treat with great understanding and give a great credit of trust to all our specialists - in marketing, in engineering, in production, in financesA Our requirements are very high because we do not have time for training - events develop very fast and it is necessary for people to have initial good qualification. Prista Oil is a company which does not suffer from formalism. For me this is in the first place. It is important for people to feel pleasure from their work, to be very well prepared and to know that they take part in the building up of a future legend of Bulgarian business. I strongly believe that Prista Oil and Monbat will turn into companies pointed as examples. And not only in small Bulgaria but in Europe as well. So we will be confident enough to say that small Bulgaria has also given something important to European business.

And finally, if we look back in time, why did you decide to devote yourself to oils?
Oil business is a business of great opportunities. At least it has guaranteed consumption. Irrespective of the attempts to find substitutes of petrol and the successes form these attempts petrol will continue to be the main source of energy in the next 50 years. And this is a very serious perspective for a business.