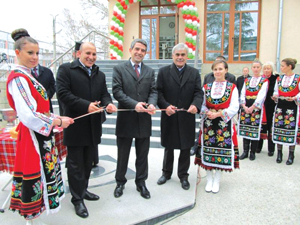 The official opening of the factory was attended by the Bulgarian President Rosen Plevneliev, who highlighted OPTIX as a model of successful cooperation between universities, Bulgarian Academy of Sciences and the business, adding that Bulgaria could be highly competitive in the high specialized industries, such as manufacturing of optical products and systems.

In an address to all guests OPTIX CEO Ivan Cholakov noted that 15 years after the start the company had a young and qualified staff, thousands of square meters of production area, and ever-expanding production in terms of volume and range.

"Our need of highly qualified specialists is growing. We have clear plans for the next 15 years", eng. Cholakov said, adding that the process of expanding production and increasing jobs in the company would continue.

Established in 1998 as a 100% private company OPTIX Co specializes in the design and manufacturing of optical, opto-mechanical and opto-electronic assemblies and devices for military and law enforcement applications.

Competently applying the modern technologies, OPTIX Co executes the entire production cycle - from design and implementation of prototypes to serial production of components, assemblies and devices.