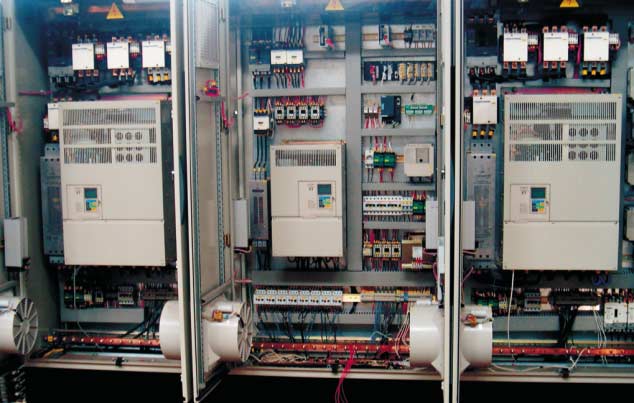 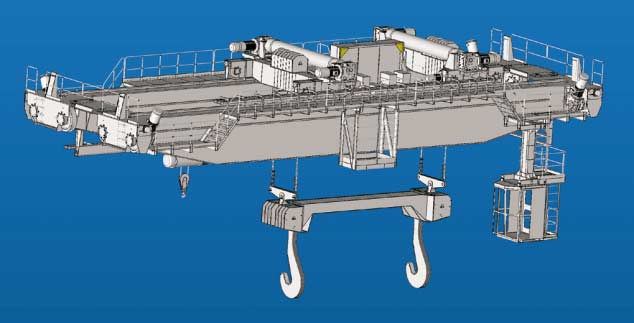 One of the leading companies in the automation field, OMRON can provide complete technical equipment and software for crane construction. This applies particularly for high tonnage cranes with demanding requirements for the electric equipment.

In Bulgaria, the teams of the “GEMAMEX” and “KRANOSTROENE ENGINEERING” companies have had successful experience in this area. Three joint projects for high tonnage cranes (over 50 t.) with a frequency control of the motion and hoists and PLC control have been accomplished.

A distinguishing characteristic of these projects is that they combine original developments of “KRANOSTROENE ENGINEERING” in the electric equipment and the construction of the metal structure and GEMAMEX know-how in the area of OMRON based hardware and software for control of such installations.

The realization of the control of a 150 t. overhead crane with 2 hoists and an additional electric hoist will be presented as an example.

Its structure is shown on fig. 2. The traverse carrying the load is mounted on two hoisting mechanisms of 75 t. each, located on two separate carts. In order to keep the traverse horizontal during lifting and lowering, it is necessary to have a synchronized control of the two frequency inverters of 110kW with vector control, which power the electric engines of the hoisting mechanisms and reverse connection by speed. Each inverter controls two electric engines of 45kW, setting in motion the respective cylinder of the hoist.

The movement of the bridge of the crane is controlled by a frequency inverter of 110kW with vector control, which sets in motion four 2-shift engines of 22/14kW.

The second shift of the electric engines for horizontal movements is used in the bypass service mode and the sway-free movements of the bridge and crane cart are guaranteed when the inverter is disabled.

The inverters are made by OMRON-YASKAWA, 1 CIMR-F7Z40370A and 3 CIMR-F7Z41100A respectively and the ones for the hoists are supplied with specialized crane software. The communication with the inverters is implemented via Profibus DP interface. The shaft encoders are by OMRON, too. The crane control system includes two OMRON CJ1M PLCs with a distributed architecture.

The first programmable controller is located in the operator cabin and serves the OMRON NS5-SQ00B sensor video terminal and the joysticks in the cabin, as well as the control of the crane movement through outside islands for input-output signals. A PCMCIA card is used to provide an archive of the status and movements of the crane. The second PLC is located in the 3-section cabinet (fig. 1) with the frequency inverters, filters and electric bypass part on the cart platform. It processes the information for the hoist weight sensors (two on each cylinder), the end switches of the hoist mechanisms and the travel switches of the cart movements. It also controls the movement of the cart and the two hoists. The supply of the system is of the closed trolley multiconductor type, the power supply and the supply of the Profibus DP network. The cabinets are assembled by Bulgarian company Telecon Co. The entire control system is designed to operate in a temperature range (-40 to +40°C) and for that purpose the cabinets are thermostatized, while the frequency inverters, regulated by the PLC, heat the engines against freezing and condensing.

Additional testimony to the quality of the projects is the fact that a part of the structures and electric crane controls is realized and programmed in Bulgaria, the construction of the heavy metal structures is done abroad and is implemented in another country.