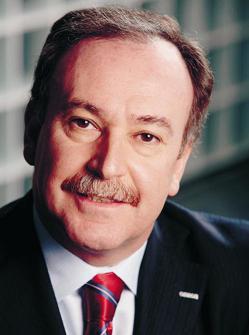 Omron Corporation has announced in the beginning of April the appointment of Mr. Roberto Maietti as President & CEO of Omron Europe B.V. Reporting to Mr. Fumio Tateisi, the Japanese-based president of Omron’s Industrial Automation Business, Mr. Maietti will also take over the role of President of the Omron Management Center Europe. Mr. Maietti was confirmed as Executive Officer of Omron Corporation at the shareholder’s meeting on June 22nd, 2006.

Following the appointment last year of the company’s first non-Japanese executive officer, this announcement of the first-ever European Chief Executive Officer represents a clear break with tradition for the Japanese corporation, and signals a major step in encouraging international management within its global organization, was said in the official announcement.

As an executive officer, Mr. Maietti will become part of the Steering Committee in Japan, reflecting the importance Omron Corporation places on moving even closer to its European customer base. This represents a major opportunity for the region to voice local customer interests, raise understanding of their needs, and influence corporate strategy from a European perspective. “That means not only taking the strategic view from Japan and localizing it for Europe,” Maietti said, “but also bringing a European perspective to corporate strategy.”

The result, he feels, will be that customers will get more attention. “In the new plan, Omron has indicated a clear desire to increase its understanding of the real needs of customers, and what is behind those needs. This is a marvelous opportunity for me to continue what I started within my sales role – to deliver on the promise that next to our innovations, which help customers to differentiate – we are committed to making our solutions easier to install and use, which raises customer efficiency and speeds their time to market.”

In his most recent role, Roberto Maietti held the post of European Sales Director for Omron Europe B.V., a position he will continue to fulfill alongside that of acting Chief Operating Officer until further notice.

Former European President & CEO, Tobita Kojiro, who will be returning to Japan to take on a new assignment stated, “Roberto Maietti’s dedication to the company’s customer focus and its concern for putting people first has made him an outstanding European Sales Director. This sense of empathy and his commitment to business excellence qualifies him well for this all-important new role as the European CEO.”