ODW Elektrik to construct a manufacturing plant in Macedonia 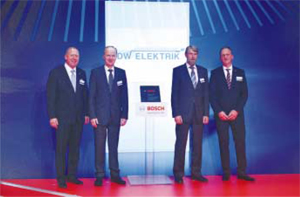 The German car cable manufacturer ODW Elektrik started the construction of its production facility in Ohrid, Macedonia. The plant will be located in Technical-Industrial Development Zone (TIDZ) Ohrid/Struga. It is worth an investment of EUR 15 million and is expected to create 1,000 new jobs. The construction is scheduled to end in June, 2016.

”The plant will cover an area of 5,000 square meters, including offices, warehouses and infrastructure. In the first stage, the factory will employ 500 people as we plan to double our production capacity in the second stage for which we would have to hire up to 1,000 people.

ODW Elektrik has ambitious plans in Macedonia by planning to boost production, offer different product and introduce new technologies. In order to realize this, the company will invest in trainings for its staff,” ODW Elektrik’s executive director Ludwig Bathon said.

He added that the company had started with a pilot production on three production lines in an existing facility. The plant will bring new technologies and know-how which will contribute to the development of domestic automotive industry. It will also boost Macedonia’s export rate, as European countries and China are the target markets for the output from ODW Elektrik’s Macedonian factory.

”Investments, such as this one, confirm the success of implemented projects and measures, aimed specifically to attract giants like ODW Elektrik in Macedonia. By today’s cornerstone-laying ceremony for a new plant Macedonia is obtaining a new large investment from the automotive industry,” Macedonia Prime Minister Nikola Gruevski said at the groundbreaking ceremony.
He added that the German company Kostal has also declared its intentions to invest in Macedonia, and to open 1,000 new jobs.

”The entrance of these two companies will substantially increase the employment possibilities for the citizens of this region, which should improve the living standard and financial security of citizens. These are our priorities and we shall keep working hard to that effect,” Gruevski stated.

productronica 2021 will take place in-person with comprehensive hygiene concept in place. The world’s leading trade fair for electronics development and production is planned to be held from November 16th to 19th in Munich...

Chinese company Huawei plans to set up a regional logistics hub in Slovenia for some 19 markets of central and south-eastern Europe. Thus, the flow of its goods through the port of Koper will increase and new storage facilities will need to be built near Ljubljana airport...

In a hybrid power solution, the feedback loop is analog, but digitally enhanced. This way hybrid power systems combine digital logic with analog circuits to leverage advantages of both worlds in a single device

According to a recently published report by ResearchAndMarkets.com the electronic chemicals and materials market size is projected to grow from USD 58,8 billion in 2020 to USD 81,7 billion by 2025, at a compound annual growth rate (CAGR) of 6,8% during the forecast period...