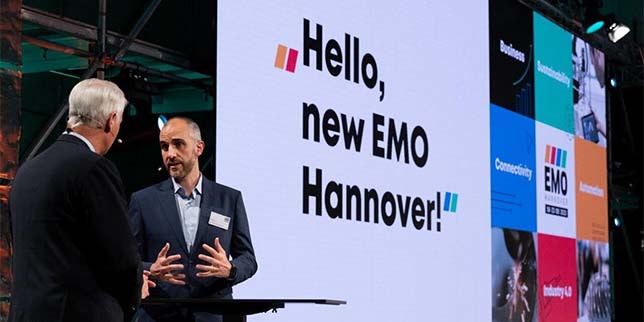 Experts from the worlds of business and politics gathered at the EMO Hannover Relaunch Conference, held on September 14, and debated on the future of production technology. At the event, which took place on the Hannover Messe trade fair grounds, organizer the German Machine Tool Builders‘ Association (VDW) presented the new exhibition concept of EMO Hannover 2023.

TMTS 2020 switched to virtual exhibition, next physical edition planned for 2022

Growing exhibitor interest to the BIAM and Welding shows in Zagreb

“The sector is in a constant process of transformation and is facing huge challenges. As the leading global trade fair, EMO Hannover must reflect these, make them transparent, and propose solutions, if it is to continue to be of relevance for the future,” explained VDW Executive Director Dr. Wilfried Schaefer. The new claim of the trade show is “Innovate manufacturing” and according to Carl Martin Welcker, General Commissioner of EMO Hannover 2023, it addresses the challenges that will face the industry in the months and years ahead. It is a call for both exhibitors and visitors alike to constantly reinvent themselves, improving and expanding their offers, streamlining their processes, and tapping new markets so as to position themselves as best possible amidst international competition. At the same time, the claim describes EMO Hannover as an innovation platform for production technologies that has evolved into an internationally relevant business platform.

The exhibition´s communication concept rests on the four pillars EMO Communication, EMO Connect, EMO Digital and EMO Conference, which include new formats such as “speakers‘ corner”, master classes, or EMO Academy, as well as familiar offers such as matchmaking or guided highlight tours – including digitally.

One of the main aims of the new EMO Hannover is to turn into the key meeting point for the industry, not only during the exhibition itself, but also between events, with an accompanying digital program, 365 days a year. “The point is to develop and shape these formats with our partners by the time of the exhibition,” Schaefer announced. A large number of events will take place around the globe in the run-up to EMO Hannover 2023, such as the EMO World Tour in the early months of 2023.

“Since 1975, EMO has been the world`s leading trade fair for metalworking. It is now more than that. It encompasses the entire value chain, primarily integrating the IT that is so essential for continuing to drive forward intelligent factory networking. These digital twins will always be a feature of EMO Hannover in future. And it is more than a sales platform. We engage in dialog with our customers, exhibitors, and visitor target groups, drawing them together in networks, mediating knowledge, and offering sound information for investors,” Schaefer summed up.