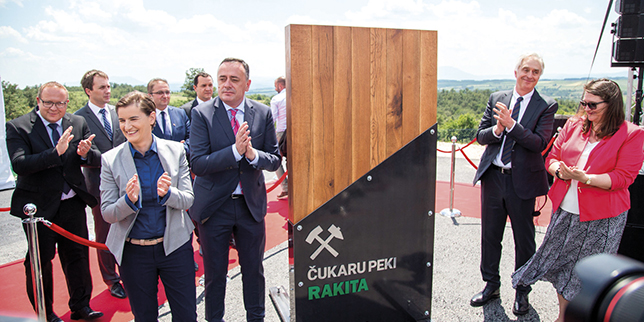 The Canadian company Nevsun Resources held a ground breaking ceremony in the Cukaru Peki zone of the Timok project in Bor, Serbia, commemorating the start of a new copper-gold mine. The ceremony was attended by a number of Serbian and international dignitaries including the Prime Minister of the Republic of Serbia, Ana Brnabic, the Minister of Mining and Energy, Aleksandar Antic; the President of Bor Municipality, Aleksandar Milikic; and the Ambassador of Canada to Serbia, H.E. Kati Csaba; as well as many members of Nevsun’s Board of Directors and Senior Management.

According to the Serbian government the company Rakita Exploration, which operates within the Canadian Nevsun, has already begun exploration mining works on the construction of a low bridge in Bor, preceding the opening of the mines.

The company’s planned investment amounts to 590 million dollars for the construction of a low pit and mines from 2018 to 2022. During that period the contractors expect to hire about 1000 employees, while Rakita will have more than 150 workers. After the mine is opened and exploitation has begun, Nevsun plans to make a capital investment of an additional 457 million dollars between the years 2022 and 2038. The initial production of the mine will start at 1,6 million tonnes per annum and ramp up to 3,2 million tonnes per annum, which is an option that could save up to $100 million in up-front project capital, Nevsun believes.

The Ministry of Mining and Energy confirms its continued support to Nevsun and the Cukaru Peki project. We are committed to supporting Nevsun as it rapidly advances the project toward production,” stated Serbia’s Minister of Mining and Energy Aleksandar Antic during the ground breaking ceremony.

Commencing construction of the exploration decline on one of the world’s best undeveloped copper projects is a significant milestone for the company. Support from all levels of the Serbian government as well as local stakeholders have been instrumental in helping achieve this historic event on this world-leading project. We look forward to unlocking significantly more value for our shareholders and stakeholders as we advance toward construction of the Timok Upper Zone, a much-anticipated initial resource for the Lower Zone, and ongoing regional exploration on our highly prospective land package,” said Nevsun’s CEO, Peter Kukielski.

The Serbian Prime Minister Ana Brnabic expressed her gratitude to the Canadian company for believing in Serbia and investing significant funds in research and stressed that mining has the potential to contribute to the country’s economic and GDP growth up to 5%.

The Timok Project is located in eastern Serbia near the Bor mining and smelting complex.

The Timok Project is focussed on the Cukaru Peki (“Timok”) deposit which includes the high grade Upper Zone (characterized by HSE-style massive and semi-massive sulphide mineralization) and the Lower Zone (characterized by porphyry-style mineralization). One hundred percent of the land required for the development of the exploration decline and 63% of the private land required for construction of the project has been acquired, Nevsun revealed back in its Q1 2018 results. A feasibility study on the Upper Zone will be completed in mid-2019.