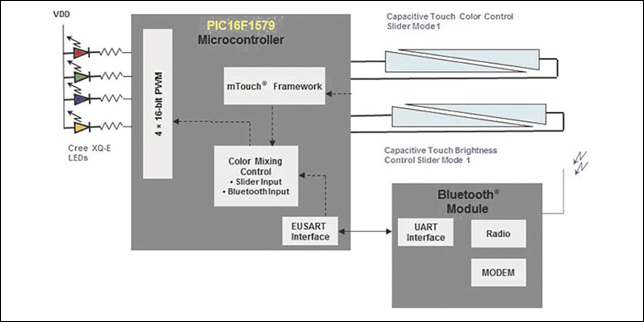 Controlling the color balance of light-emitting diodes (LEDs) accurately and wirelessly can be achieved using an 8-bit microcontroller and a Bluetooth® 4.1 low energy module to control the red, green, blue, alpha (RGBA) color space. The demonstration board shown in Fig. 1 has four LEDs – one each of red, green, blue and amber. The brightness of each of these LEDs is controlled through a pulse-width modulation (PWM) duty cycle.

This can be achieved using Microchip’s PIC16F1579 microcontroller, which has four 16-bit PWMs that are used to drive the LEDs. The 16-bit PWMs allow for precise control over the intensity of each color LED and the mixing of different RGBA brightness levels to create different colors.

Lighting
The light produced by the LEDs varies due to several factors. The brightness, measured in lumens, will vary for LEDs of different types, and between LEDs of the same type. For color LEDs, the specific color measured by the chromaticity values will differ from one LED to another. Small samples of a particular brand of LEDs were measured to develop a brightness and chromaticity profile. The values were then used as typical values in the hardware design and in the software’s chromaticity calculations. This process is called color tuning. The resistor values were fixed so that each color produced the same number of lumens. The LED series resistors are red 820W, blue 400W, green 500W and amber 500W.

Operating modes
There are two modes of operation: the first is hue saturation value plus white (HSVW) and brightness sliders mode; and the second is chromaticity selector using Bluetooth low energy. The board initially powers-up in mode one. There are two capacitive touch sliders on the board, one for color input and the other for controlling the brightness levels. If the first slider is touched while in slider mode, the color selected on the slider is output on the LEDs. The selected color is displayed until another input is received. The brightness of a particular color can be controlled with the other slider.

For the second mode, the color values (PWM) are selected using an Android-based mobile application or Windows-based desktop application. The respective PWM values are then sent to the board via a Bluetooth connection. The application uses the CIE 1931 XY chromaticity chart, see Fig. 2.
The exact PWM values for the selected color and brightness levels are computed and sent to the RGBA board over the Bluetooth connection. The Bluetooth module on the board then receives the PWM values, which are used by the RGBA board firmware to display the selected color. 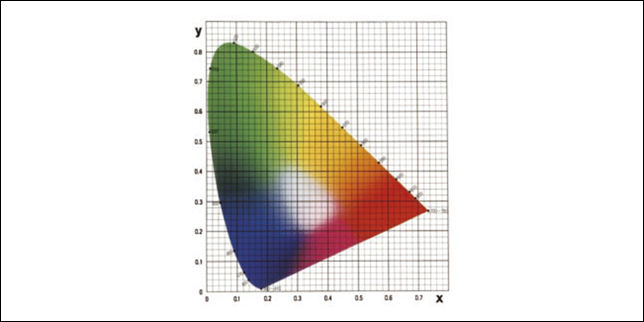 The chromaticity selector application GUI consists of the CIE 1931 xy chromaticity chart. The CIE 1931 color space shows a wide range of colors in terms of chromaticity (x) and luminance (y). The color and brightness levels of red, green and blue LEDs mapped onto the CIE color space define a triangle that encompasses all possible shades that can be generated by the output of three devices; this is known as the color gamut.

To obtain a better range of colors, an amber LED has been added. The xy data for the amber LED are mapped onto the CIE 1931 xy color space. This defines another triangle between the red, amber and green coordinates. Mixing red, amber and green in different proportions produces the colors within the color gamut in Fig. 2. The PC GUI and the Android applications used in this mode implement this color-mixing algorithm to calculate the PWM duty cycle values necessary to produce the desired color.

The chromaticity selector application sends the PWM values over a Bluetooth connection. This connectivity module will be able to communicate with mobile phones and PCs that contain Bluetooth v4.0 [and higher] transceivers. The module is primarily used for receiving duty cycle values from master devices that run the chromaticity selector application. The pin-to-pin configuration between the microcontroller and the BLE module is shown in Fig. 3. 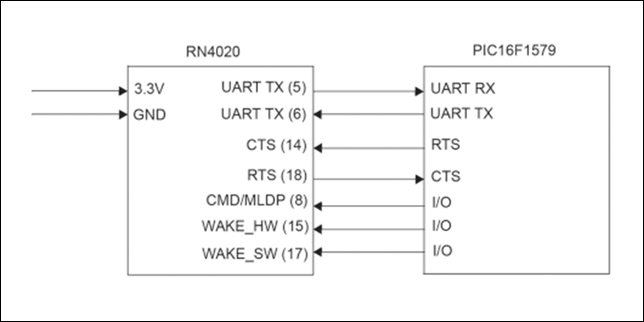 Fig. 3: Interfaces between the Bluetooth low energy module on the left and the microcontroller

The RGBA view controller class acts as the GUI or view manager and as the controller of the application. This class is at the top of the hierarchy responsible for making new objects of classes and performing dependency injection. It also handles all the GUI events and calls appropriate methods. The RGBA calculation class is responsible for finding out if the selected point is either inside the RGB or the RGA triangle or outside of these triangles, and calculates the duty cycle per color for all LEDs. The matrix 3x3 class implements all 3x3 matrix math operations such as inverse, determinant, transpose, co-factor and multiply. The Vector 3 class implements a column vector of size three to be used in matrix maths for the matrix 3x3 class. The RGBA data class is a custom data type to store the duty cycle values of all colors.

The Bluetooth low energy device information class stores the basic information about the remote connectivity device - its name, address and supported server service. This information is used to identify and connect to a remote device. In the search result delegate class, the delegate services the event from the Bluetooth low energy class when it finishes the search for devices and the devices are available as a list for the user. The necessary time for the search operation is ten seconds. With the connection state change delegate class, the delegate services the event from the Bluetooth low energy class to determine if the master PICtail card is connected to a remote device or not and displays the current connection state to the user. The constants class stores all the constants required for the application, such as RN4020 module commands and responses, service and characteristic UUIDs and so on.
The Java™ application class for the Android operating system follows the MVC principle closely as well, using Android activity classes that are structurally similar to the desktop application. However, the Android application uses the built-in Bluetooth low energy hardware of the Android phone. The Android operating system provides all the necessary libraries for Bluetooth low energy communications with all required events and call backs. The RGBA view activity class is similar to the view controller class on a desktop except for the GUI controls, which are defined in an XML file instead of a class.

Conclusion
This article has shown how a 16-bit PWM allows for precise control over the intensity of each LED. The RGBA LED color mixing board described has slider capacitive touch buttons for color input and brightness control functions. A Bluetooth 4.1 low energy module was used for communications so the user could send PWM values to the RGBA board to output the desired color. The color was selected on a chromaticity selector application on a Windows desktop or on an Android-based phone.