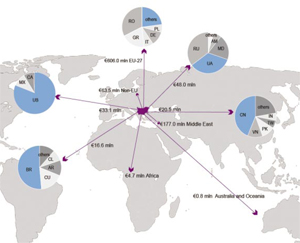 Manufacture of chemicals and chemical products in Bulgaria: Devnya Cement

Manufacture of chemicals and chemical products in Bulgaria: Wienerberger Bulgaria

Manufacture of chemicals and chemical products in Bulgaria: Keros Bulgaria

In the period before 1989, the country was a leader in the manufacture of chemical products such as soda ash, phosphorus and nitrogen fertilizers and medicinal products. After 1989, the Bulgarian economy welcomed many foreign investors. Companies such as Solvay, Sisecam Group, Saint Gobain, Air Liquide, Italcementi Group, Lukoil develop successful business in the country. Solvay, Belgium bought 60% of the soda factory in Devnya.

Today, this is Europe’s biggest soda ash plant in Europe. Lukoil acquired 58% in Neftochim -Burgas which remains the biggest oil refinery in the Balkans. The US Acid & Fertilizers bought the majority share in Agropolychim. Today, the company exports phosphorus and nitrogen fertilizers to five continents. Henkel, Knauf, Saint Gobain entered the production of construction materials with large capacities. In 2005 the Turkish Sisecam Group built a new glass factory near Targovishte. By 2010, Sisecam increased its factories to four, manufacturing products that are unique to the region.

Many investors in the sector highlight the existence of natural raw materials as one of Bulgaria’s biggest advantages. The country has rich reserves and fields of salt, sand, clay, limestone, kaolin, in proximity to existing industrial areas and complexes. Bulgaria combines highly qualified professionals in the sector with competitive prices of labor and high relative labor productivity. Readily available facilities and huge unrealized/untapped potential in the sector open up vast opportunities for business development.