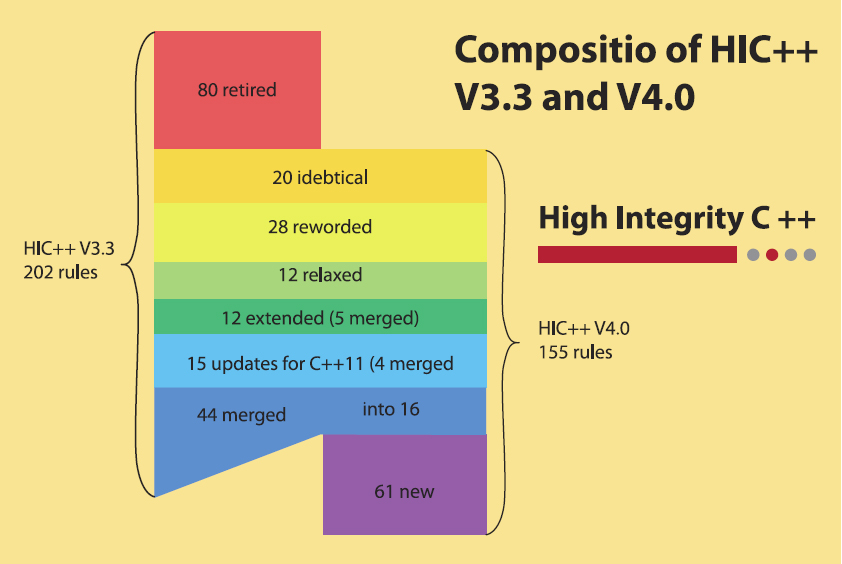 PRQA | Programming Research, a global leader in static analysis, announces the publication of Version 4.0 of the High Integrity C++ Coding Standard (HIC++), which provides coding rules and best practices to help development teams to produce high quality C++ code. HIC++ was first published ten years ago, and pooled the best practice guidelines available at the time, along with language advice from PRQA’s own C++ experts.

The longevity and ongoing popularity of HIC++ is evidenced by Chris Rommel, Vice President, M2M Embedded Technology at VDC, who stated, "The growing importance of coding standards has been one of the most significant trends impacting the test tool space over the past several years.  And HIC++ is one of the most widely adopted".

"We are very proud of the fact that the development community has embraced HIC++ and recognize this as a source of coding best practices for C++ applications" stated PRQA’s CTO, Fergus Bolger, "It is humbling to know that this coding standard has been so widely adopted, with more than 24,000 copies having been downloaded over the past decade."

The new HIC++ Version 4.0 consolidates or retires a number of original rules and adds many more related to C++11 features, demonstrating its ongoing relevance to modern C++ coding best practice. Key enhancements include:

• Overall consolidation of rules to a more manageable size - down from 202 to 155, which are categorised using relevant clauses and sub-clauses from the text of the language standard (ISO C++ 2011) for easy navigation and cross reference,

The new HIC++ coding standard is now available at www.codingstandard.com, in addition to a whitepaper by the authors, summarizing the rationale behind V4.0, the changes from the previous version and how HIC++ fits with other key C++ coding standards.