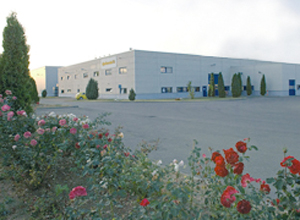 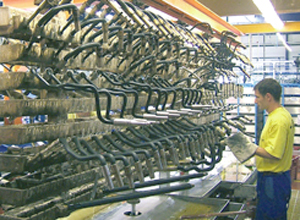 Bosch invests 90 million Euros in a new plant
German company Bosch announced it would invest 90 million Euros to build a new production plant in Blaj, central Romania. Bosch intends to build auto sensors and thermo technic profiles, in the new production facility, when the new investment is completed at the end of 2013. By now, the company has purchased a seven-hectare-plot where the future production facility will be built. Bosch currently has a Rexroth plant in Blaj, which produces equipment for the automotive industry and engages 800 employees. First production lines were inaugurated in 2007 and ever since, Bosch has invested 30 million Euros in the Blaj plant.

High-Quality Concrete Sleepers from Kosjeric
Italy’s Margaritelli and Sabac-based Inter-kop have signed an agreement on the construction of a railway sleeper car factory worth EUR 7 million. Margaritelli from Perugia is the leading Italian factory of concrete railway sleepers. The Kosjeric-based factory should be finished by the year’ end and will be operational in early 2012. The factory’s annual capacity in the first phase of production will be 150,000 sleepers. Initially, it will employ 60 workers. The equipment will be provided by Margaritelli, Inter-Kop will construct the facilities and infrastructure, while the municipality of Kosjeric has appropriated a 2-hectare parcel of land for the project.

Glass Lifters for FIAT
Italy’s Lames intends to start producing automatic glass lifters for automobiles in the town on the Sava river. The factory of this Italian company will employ 250 workers. Production of automatic glass lifters for cars starts will begin in September in a rented factory where 80 people will get jobs. Lames plans to build its own factory in Mitrovica this autumn. The company will buy 5.5 hectares of land in the work zone Sever in Sremska Mitrovica in September and build an 8,500 square meter factory on that plot. Construction of this facility will most probably begin in late October or November as the factory is expected to be fully operable by mid-2012. The total value of the investment is EUR 8 million.

Indian Company Building Two Plants in Macedonia
Indian Samvardhana Motherson Group (SMG) will construct two plants at the Technological and Industrial Development Zone Skopje 1. The company invests EUR12 million in the plants that will manufacture parts for rear view mirrors, aimed for the European market, as well as open 140 new jobs. The plants should be completed in 12 months. "Macedonia is proud to host a giant such as Motherson Group, being present and successful in over 30 countries worldwide", Prime Minister Nikola Gruevski said at the cornerstone laying ceremony. The new investment, he said, bears two-fold significance for Macedonia - opening of new jobs, the company’s announcements for further investments; and role model for other India’s companies to come to Macedonia.

POSCO breaks ground for USD 350 million steel plant in Turkey
South Korean steel maker Pohang Iron and Steel Company (POSCO) kicked off the construction of its new cold-rolling mill in Turkey’s northwestern province of Kocaeli. The world’s fourth largest steel producer teamed up with Turkey’s Kibar Holding and another South Korean company, Daewoo International, for the USD 350 million facilities expected to create at least 1,000 jobs when it becomes operational in May 2013. POSCO’s cold-rolling mill is the biggest South Korean investment in Turkey to date. The facility’s annual output of 200,000 metric tons will be able to meet the stainless steel demand from countries in Eastern Europe, the Middle East and Central Asia as well as Turkey and its immediate neighbors.

Chinese firm in major mining-energy investments
China’s state-owned energy company Zhejiang Energy Group has signed a protocol with Turkish Polat Madencilik, involving the development of a coal mining field and building of a coal-fired power station in Turkey’s Aegean province of Aydin. The project will create job opportunities for some 5,000 people.

The two-stage plan initially calls for the mining of some 3 million tons of coal per year from the coal mines owned by Polat Madencilik in Aydin’s Soma and Kinik counties. The second stage includes the establishment of either a single unit 660 MW or two units of 300 MW coal-fired power plants, depending on feasibility reports to be conducted at a later time.

Hyundai plans USD 400 million investments in Turkish plant
Content with its production and sales figures in Turkey, Hyundai is set to invest USD 400 million into its plant in the country. The South Korean carmaker will take steps regarding the investment following the signing of the free trade deal between Turkey and South Korea, which is expected to take place before the end of the year. The investment involves increasing the capacity of the plant to 200,000 cars per year and the addition of a new model. During his private visit to Turkey, Hyundai Motor Company’s Vice Chairman Eui Sun Chung, said that Hyundai’s focus will be on satisfying the Turkish customers first and vie to become the best auto brand in the eyes of its customer base. "Our current and future product line in Turkey will be shaped by Turkish drivers’ demands," Chung told the press. "Hyundai will strengthen its presence in Turkey and is pleased to be one of the major investors in the Turkish automotive industry," Hyundai’s Vice-Chairman added. Hyundai’s Turkish plant manufactures Accent Era and i20 Troy models. Exporting cars to over 60 countries, the Hyundai-Assan Izmit plant in Turkey’s western province of Kocaeli holds the "highest quality production facility" title among all Hyundai plants across the world.

Honda invests USD 10-15 million in Gebze plant
Carmaker Honda is set for a rebound in its global operations after suffering a series of setbacks caused by the massive earthquake in its homeland Japan. As part of its global restructuring plan, the company has designated its Turkish unit as the production base of the new Civic Sedan, destined for markets in the Middle East, North Africa and Eastern Europe. Honda’s Gebze plant in Turkey’s western province of Kocaeli will be the sole supplier of the new Civic Sedan for the surrounding region, Honda Turkey’s Hideto Yamasaki told reporters at the launch event of the company’s new sports hybrid vehicle, the CR-Z, in Istanbul. "The plant will receive USD 10-15 million of initial investment for line upgrades," said Honda Turkey’s General Manager. The Japanese company will increase its production volume to 50,000 and then to 70,000 cars in two stages. The second stage involves the production of a second model, he added. "Honda is well aware of Turkey’s increasing importance and is planning accordingly. We are considering the addition of a new model to our production line in Gebze," said Yamasaki, adding that the vehicle model will be determined later on depending on the demand in the export markets. Honda aims to sell 15,000 cars in the Turkish market this year and to raise the amount to 20,000 in 2012.