LAMIERA responds to the recession 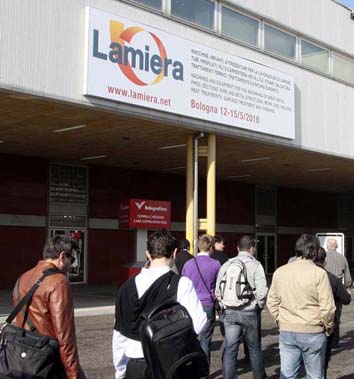 Recognized as being the most qualified trade show specifically devoted to the metal forming machine tool sector, LAMIERA held its fifteenth edition from 12 to 15 May 2010 in the pavilions of the exhibition quarter of the Fiera Bologna.
The visits officially registered at the entrance turnstiles of the show, considered one of the main appointments dedicated to the offer of machine tools operating with the metal forming technology, are more than 18,000. Numerous visitors interested in specific contacts, this is what emerged from the first results collected by the organizers of the event at the stands in the last two days of the fair that, on Friday and Saturday registered a boom of presences.
The offer of 441 companies, 30% of which from foreign countries, extending on a total surface of more than 37,000 square meters attracted operators from all over the world – 7% of which foreigners.
“Even if the comparison with the previous edition is not able to highlight the growth we were used to achieve – stated Giancarlo Losma, president of UCIMU-SISTEMI PER PRODURRE – the exhibition confirms to be the not-to-be-missed appointment for the operators of the segment, independently from the economical background not yet completely favourable”.
The internationality of the event promoted by the association of Italian machine tools, robots, automation and auxiliary technologies manufacturers, was guaranteed by the considerable presence of companies from: Germany, Switzerland, Great Britain, United States, France, Holland, Turkey, Japan and Spain; there were also manufacturers from Austria, Finland, Israeli, Bulgaria, Portugal, Ireland, Denmark, Slovenia and Taiwan.