Is Bulgaria’s gas independence an illusion? 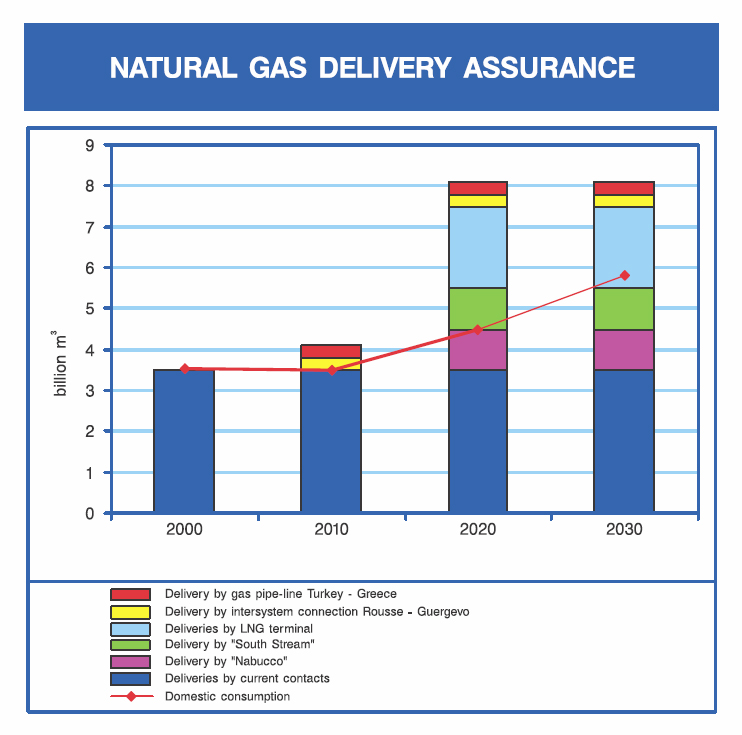 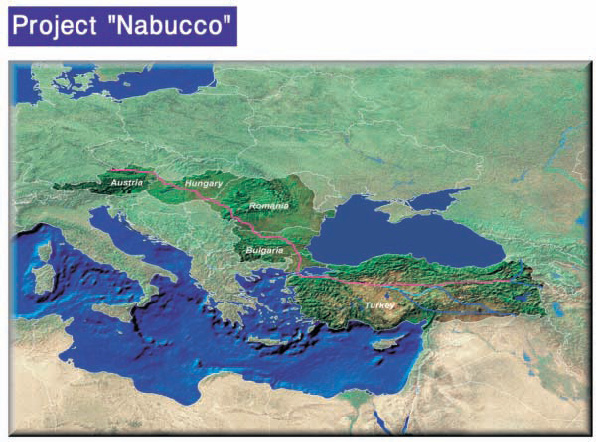 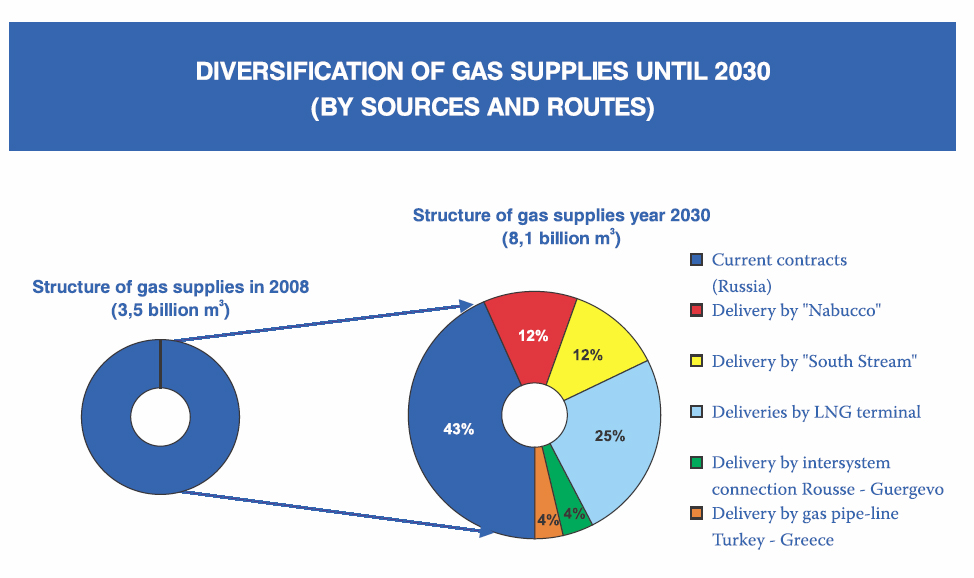 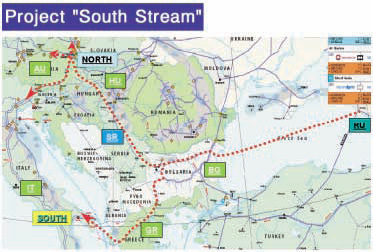 Alternative sources of gas supply, according to the Ministry of Economy and Energy

At the time of gas crisis in Bulgaria (January 2009) the Government declared its intention to work actively for limiting its dependence on gas supplies from Russia. Many alternative gas delivery sources, as Nabucco project, were widely discussed. Among the other mentioned possible ways for diversification of the supplies were construction of internetworks with neighbouring countries, the opportunity for increasing the capacity of the underground depository in Chiren as well as the construction of a second gas storage in the Varna region.

The state policy goes in three directions
The state policy concerning natural gas delivery security goes in three directions. "On one side - gas delivery sources diversification, i.e. providing other sources/deliveries than Russian. Its implementation is connected with the Nabuco project and a project for construction of a terminal for liquid /compressed natural gas on the Aegean coast of Greece that would be used by Bulgaria, Romania, Macedonia and other countries. The second step consists of the construction of internetwork connections with neighbouring countries and intensifying locating and drilling for petroleum and gas on the territory of Bulgaria and the Bulgarian Black Sea waters", commented from the Ministry of Economy and Energy.
"The third measure will be transforming of the gas deposit "Galata" near Varna, into a gas storage. The project implementation format plus the amount of investments are being currently discussed, as well as the participation of "Melrose" and the State in the project", Ministry of Energy added.

Expanding of the gas storage facility in Chiren
As already stated, among the options for guaranteeing natural gas delivery is connecting of the gas pipeline network of Bulgaria to those of Greece and Romania. According to the Ministry of Economy and Energy, the implementing of that option is realistic and financially possible, fund raising being a technical issue rather than issue of capabilities.
As far as the gas storage in Chiren is concerned, its expansion has being planned since 2008. "For its expansion funding is planned in the investment programme of "Bulgartransgas Ltd." The project will be developed in two stages, the first - aiming at reaching daily production of around 7 million cubic metres per day, and the second stage plans to reach 9.5 million cubic metres per day, the Ministry stated.
Exploration of oil and gas fields in Bulgaria
Representatives of the Ministry of Energy assure that the State creates attractive conditions for intensifying exploration of oil and gas fields in Bulgaria, and for Bulgarian companies too, and plans on holding on to that policy in the future. All known fields are being actively developed and for the time being there are no "frozen" gas fields on the territory of Bulgaria and in the Bulgarian waters in the Black Sea.
Among the latest gas fields found in the country is the one by the village of Deventsi near Pleven. Its potential is currently estimated. As far as drilling for natural gas in the Black Sea, the Ministry declared that due to high geological and financial risk, as of 1989 the State does not invest in drilling and exploration of oil and gas fields in the Black Sea. "We encourage Bulgarian and international companies to do that, and those activities have not stopped since," MEE adds.

Yield of gas from gas hydrates
According to publications in various sources, the Black Sea is one of the world’s richest deposits of gas hydrates. They are chemical compounds in the form of solid substances in which a great amount of gas has been compressed. Analyses show that one cubic metre of gas hydrate contains about 160 cubic metres of methane.  Acquainted with the matter claim that the Black Sea holds enormous deposits amounting to trillions of cubic metres that could provide for the gas needs of our country for at least 1000 years ahead, and only in our shelf zone.
In answer to the question about the perspectives for gas yield from gas hydrates in the Black Sea, the Ministry of Economy and Energy stated that currently the perspectives are rather hypothetical and vague due to lack of appropriate technologies. Unfortunately, attempts in the field require substantial funding and technological background that could be granted by a limited number of companies and countries, the Ministry of Economy and Energy stated.

The Nabucco Project
Gas pipeline Nabuko will carry natural gas from the Turkish Eastern border to Austria through the territory of Bulgaria, Romania and Hungary. Its total length is 3300 km. The envisaged yearly potential is 31 billion cubic metres of gas. The project is implemented by Nabucco Gas Pipeline International, established 2004 in Vienna. First shareholders in the company are: OMV, MOL (Hungary) Transgaz (Romania), BOTAS (Turkey) and BULGARGAZ (Bulgaria). All founders have equal number of shares. In February 2008 "RWE" (German company)  joins  the partnership receiving an equal share at the expense of the shares of the other participants. At the same time the French company Gaz de France was refused to join the project despite their stated intention, while Gazprom and OMV negotiated a joint venture, 50/50%, that will run the gas distribution centre in Baumgarten (Austria). The gas pipeline is expected to be completed in 2013 and its cost is estimated at 7.9 billion euro.

Parameters of "South Stream"
Another widely discussed topic is the gas pipeline South Stream. The agreement for its construction was signed on June 23, 2007 between Russian Gasprom and Italian Eni. It is expected to transport 31 (47) billion cubic metres annually. On January 18, 2008 Bulgaria and Russia signed an intergovernmental agreement for cooperation in the construction of gas pipeline South Stream on the territory of Bulgaria.
The beginning of the 900-km-long gas pipeline is in Dzhubga (Krasnodarski region, Russian). It will traverse the bottom of the Black Sea up to Varna (Bulgaria). On the Balkan peninsula the gas pipeline will split and reach south Italy, through Greece and Ionian Sea, and - north Italy through Serbia, Hungary and Slovenia (with an arm going to Austria). The project aims to partly substitute the planned enlargement of "Blue Stream" from Turkey through Bulgaria and Romania to Hungary.
In financial terms the projects is estimated at around 10 billion euro. It is expected to be finalized for less than three years, after due approval by the European Union. It will be financed, owned and managed jointly by Gasprom and Eni, and the transit countries will be offered minority shares. The exploration works and the construction will be executed by Saipem (a subdivision of Eni). The submarine part will be 900 km long and will reach two thousand metres below sea level.
South Stream will go over Turkey and Ukraine (similar to North Stream project from Russia to Germany, on the bottom of the Baltic Sea, traversing the Baltic states and Poland), and manifests the political aim of Russia to lower the dependency of the gas network to the EU on its neighbouring countries.
On Bulgarian territory the gas pipeline will probably come up in the area Pasha dere - some 8.5 km south from Galata cape, by the existing pipeline in the submarine gas field Galata, which is owned by the firm Petreco Sarl (a subdivision of Melrose Resources).

The gas storage facility in Chiren
The gas storage facility in Chiren has around 1,800 metres average depth of the gas reservoir. It is constructed in 1964 in the place of an exhausted field, with a total volume of nearly three billion cubic metres natural gas. The first projects for the transformation of the field date from 1974, when it is turned into a storage facility for natural gas, and the first 100 million cubic metres Russian natural gas are compressed into it. So far 38 drills have been made, out of which 21 are in exploitation.
The Chiren gas storage facility, which is included in the main gas pipeline of Bulgaria, is the biggest and most modern in the country and plays an exceptionally important role in the economy of Bulgaria. Its importance will grow considerably with the inclusion of the storage facility in the biggest European gas pipeline under the Nabucco project, which will connect Caspian gas with Central Europe. Its construction is expected to take off in the end of this year. The total cost of the project stands at 7.9 billion euro, and in the Bulgarian track only (where the Chiren storage facility will be included) will be invested 400 million euro.
In the last years Bulgargas has invested over 25 million leva in modernization of the technology and equipment of the storage facility. Higher safety and safe operation of the facilities was achieved, higher quality and extraction of natural gas - over three million cubic metres per 24 hours, better efficiency with regards to economic indicators and possibility for storage of natural gas owned by other consumers. The biggest role in this has the installation for drying natural gas for the consumers, which has a capacity of 5 million cubic metres per 24 hours.