Investor of the year in Bulgaria award 2006 for Melexis 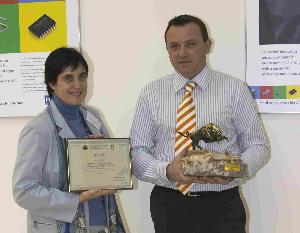 Melexis received the honorary “Investor of the year – 2006” award at the ceremony, organized by the Bulgarian Investment Agency. Eight category champions were selected from 75 Bulgarian and Foreign candidates. Three ministers and the Chairman of the Invest Bulgarian Agency conferred the award.

Melexis won top honors for the category “electronics industry top investor” for its 30 million euro investments over the next three years. The investment will be applied toward new facilities, equipment and employee training. The Belgian company has serious ambitions for its Bulgarian operation, expanding on the previous 12 years of successful activity. In the next three years it plans to double its current work force of 200 people.

The South-East European INDUSTRIAL Мarket presents its first issue of 2022! What is the current development of Romania’s chemical industry? How does the pandemic accelerate the shift to machine learning and edge IoT? Find the answers, together with many more exciting industry highlights, in the edition which is already available for reading online HERE...