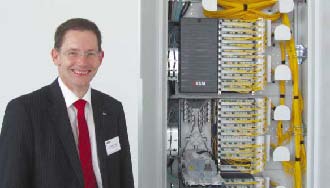 Interview with Markus Stieger-Bircher, Chief Operating Officer of R&M, on the occasion of the grand opening of the newly-built plant in Sofia

Dear Mr. Stieger-Birche, How R&M decided to invest in Bulgaria? What is the importance of this investment for your company?
There are number of reasons for this investment. Everything started because of the economic crises to a certain extend. The swiss frank rised sky high in last summer and swiss manufacturers were forced to react. Relocating part of the assembly process was a strategic decision not only taken by the economic crisis, but as a part of the strategic plan. In February 2011 the things got worse and we were forced to speed up the process a little bit.

There are number of reasons to have choosen Bulgaria for our investment. What we have done is what every international company is doing - a location benchmarking - we did it for Korea, Thaiwan, China, India and then back to South-Eastern contries and finally we decided to choose Bulgaria for a number of reasons. Number one is that we are acting in the local market for more than 10 years and we have some very trusted people in the organization, we already know to certain extend the behaviour which is different to what we experience in Switzerland. Number two is the very competitive environment when it comes to governmental support, when it comes to regulations, and yes, we have done benchmarking with Poland for instance and Moldavia, Romania as well, but at the end of the day all the factors that might have the influence for our decision pointed at Bulgaria.

What is your global distribution concept and how do you manage to adapt it to every market in the world?
As you probably know, R&M is in a quite competitive business. Our major competitors are from Asia and the United States and the question now is how to differentiate. And for me one thing is clear - differentiation just on a product level when it comes to connectors, platforms or pigtails is no longer possible because you will find cheaper suppliers in Asia very easy. To me differentiation is in other elements - solution selling, customising, customising platforms, quality, reliability and customer support in all dimensions. What we are doing here in Bulgaria is basically the mainstream - not really the finished goods, of course the fiber optic patchcords are finished, but when it comes to platforms we do the majority of work here but having the possibility to do local adaptations in the international markets. For instance, for Asia we do this in India or China, just adapting existing platforms. I strongly believe that this is one of the major competitive advantages of R&M compared with the big ones which are just selling mainstream and not customised solutions.

What technology and market trends do you think would affect the electronics sector within next years?
I personally think that the speed of Internet is mega huge trend worldwide. The demand for bandwidth is increasing. New applications are constantly popping up with enormous demands. Applications as for example HD broadcast applications, the increasing trend to use and generate social media content, data storage  via cloud computing or the extensive & widespread usage of high speed internet services are driving this trend even more.I assume that all IP stuff, all the electronic components, machines and equipment will continue to be main trend which leads in term to the requirements of very high reliable networks, passive components.

Could you point out the most specific features of Bulgarian market, compared to South-Eastern or Western Europe?
As far as I understand the Bulgarian market it is not really different, it’s quite competitive. We have a quite big influence from our Chinese competitors. But the main part is looking for high-end solutions, so I can say that solution selling is quite critical. And therefore I wouldn’t distinguish the Bulgarian market from the other ones.

What are your near future market plans for Bulgaria?
To be honest Bulgaria is going to be one of the major strategic locations for R&M. So a number of our future plans are based on the success of this plant here. And I’ve already mentioned that the manufacturing at our headquarter is remaining - some manual assembly, some semi-automated processes just not to lose the link between product innovation, R&D, industrialization of products and getting them round top at certain speed. Bulgaria is our executor for this dream to become true. So yes, if there are requirements for any other investments we are doing them and I am looking forward to improve the business here in Bulgaria to any extend.

The first high-tech plant for communications inaugurated in Sofia

In June, earlier this year, the Minister of Economy Delyan Dobrev presented a class A investment certificate to Reichle & De-Massari Bulgaria Production EOOD. Following a successful entry into the Bulgarian market, R&M is a pioneer of the production of optical and copper solutions for communications networks in Bulgaria. The Swiss company’s investment has enabled Bulgaria to make history in a business that had not previously existed in the country. The presence of R&M in the Bulgarian market resulted in a noticeable increase in the willingness of other foreign companies to invest in high technology fields in Bulgaria.

R&M’s products, manufactured in Bulgaria, will be available on all global markets. All good practices currently followed by R&M will be implemented in Bulgaria too. The plant’s employees will even spend some time in Switzerland, where they will master the new know-how and receive training in company policies and product lines.