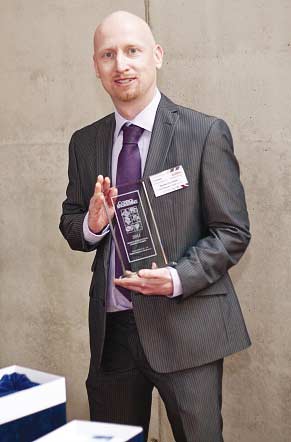 Dear Mr. Havlicek, FANUC is one of the largest manufacturers of CNC systems, robots and machine tools in the world. How do you evaluate the Bulgarian market and FANUC’s activities here?
I would like to divide this question to two parts. In the CNC systems we have been for more than 30 years in Bulgaria. Our office in Sofia was one of the first FANUC offices in Europe. Consequently, we are well established in this area in Bulgaria and working always on some improvements. However, we can see big potential for our yellow robots in Bulgaria as the level of robotics automation, at the moment in Bulgaria is not what it could be. That is the reason why we have the robotics technician in our Sofia`s office from the last year. We want to be as closest to our customers as it is possible to meet their requirements in the best possible way and also to serve the local companies with the local technicians.

Last year, FANUC was appointed as Global Innovator Company. Could you list some of the recent product and technology innovations of the company?
FANUC always tries to keep all its products up to date as the world of automation is changing every day. Consequently,our products must be developed to keep the pace with our customer’s requirements.

We introduced 3 new industrial robots together with a new controller R-30iB in 2012. This new controller has space saving stackable design and maximum energy saving features, which together with a new generation of advanced technology contributes to the maximum productivity. Regarding our new robots I would like to mention LR Mate 200iD and ARC Mate 0iA. LR Mate robot series is the smallest articulated models within FANUC products with a capacity that with the advent of the new Model LR Mate 200iD increases from 5 kg to 7 kg. These robots ideally suited for fast and precise applications in all types of environment.
FANUC ARC Mate 0iA is extremely lightweight, compact robot specifically developed for applications arc welding with focus on price competitiveness and high functionality.

Could you give us detailed information about some industrial automation project in Bulgaria, realized in 2012 year, with Fanuc’s products or engineering solutions?
Well, we had many projects in Bulgaria in 2012. Nevertheless, I would like to tell you how we try to get as much as possible from the fact, that FANUC has not only robots but also CNC. The company RAIS is Bulgarian machine tool builder and our very good customer for CNC controls. They produce turning and milling CNC machine tools. After we presented them also our possibilities regarding robotics products, they liked the possibility having not only CNC but also FANUC robot as one brand. After the meeting they wanted to implement FANUC robot into their turning machine. We provided them robot FANUC ARC Mate 100iCe, training and assistance with implementing it into turning machine T200 equipped with Control system FANUC 0i TD. Now this machine is fully working and has been exhibited at many exhibition in Bulgaria, Romania and Serbia. RAIS is satisfied with this solution based on great reliability of FANUC products and would like to repeat selling automation cells in the future. This is the synergy effect from the fact that FANUC has the complete range of the products for industrial automation. It does not matter from which area of industrial automation you are, FANUC has always the solution for you.

Could you present the long-term development strategy of FANUC for Bulgarian market and South- East European region as a whole?
First of all I would like to say that the whole South-East European region, especially Bulgaria and Romania is important to us. Despite the fact that economic situation is not easy anywhere in Europe and we have to customize our long-term development to this situation, we are investing in these regions, especially Bulgaria, to be able to support customers in best and efficient way.We can see the potential of the future growth in the field of robotics in Bulgaria. That is why we are focused on developing local robotics support group within existing and very well established FANUC office with great support of Czech sister company. In this way we believe in further growth in the market and we are looking forward to more success stories from the country.