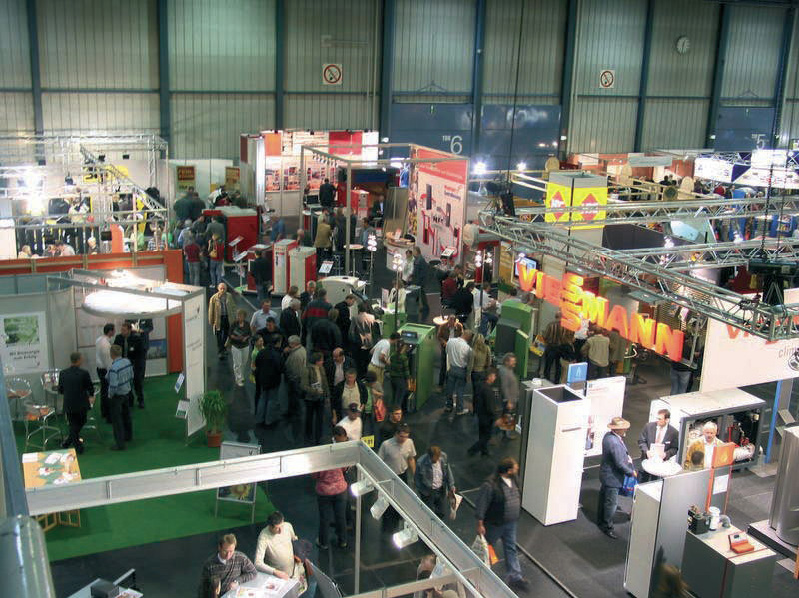 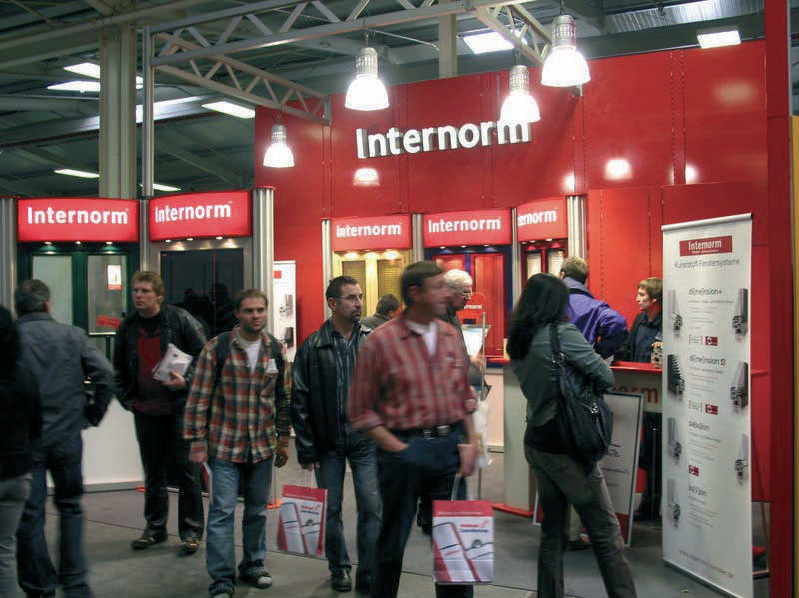 At October 12th, 2008 this year’s RENEXPO International Trade Fair for Renewable Energy and Energy Efficient Construction and Renovation has come to a successful close. 13,907 visitors from around the world came to inform themselves at the Augsburg Trade Fair and Convention Center of the energy supplies of the future with renewable energy and energy efficiency on the last four days. From biogas and cogeneration to wood energy, passive houses, energetic remodeling, innovative insulation materials, solar energy as well as hydro- and wind power, the wide range of topics at the RENEXPO this year once again impressed qualified visitors and end-consumers alike.
“We are very satisfied. The quality of the trade fair grew again this year, and we never had so many visitors from so many countries,” was the resume of Elisabetta Alberti, Project Manager of RENEXPO. “The number of exhibitors grew 11% to 302, and the number of visitors went up 15% to 13,907. With the current economic situation, we exceeded our expectations”, according to Johann-Georg Rohm, General Manager of the REECO Group.

The main themes of this year’s trade fair
were the reduction of energy costs and heating without oil. Whether with pellets, wood chip burners, fireplaces or tiled stoves, the main things is to get away from oil! In addition, the exhibits on energy efficient construction and renovation showed how to immensely reduce energy costs, and this year, for the first time, took up an entire hall at the trade fair.

The topics were spread out over three halls
Hall 1: IHE HolzEnergie (Wood Energy), biogas and cogeneration were represented here. As part of the trade fair, the BBE Trade Congress for Wood Energy, the Conference Bio Natural Gas from Biogas, the 4th Trade Meeting for Small and Midsize Wood Energy as well as the 2nd Trade Meeting on Decentralized Small and Micro Cogeneration took place.
The topic of interGreenBuilding was new this year, taking up Hall 2. This focal point dealt with the theme of energy efficient construction and renovation. For the first time, the impulse conference GreenBuilding was carried out with huge success.
In Hall 3, the topics of energy suppliers, wind energy, hydro power, heat pumps, solarthermics and photovoltaics were represented.

Exhibition events
Further congresses taking place as part of the trade fair include the 4th Federal Conference on Heat Pumps, as well as the 7th Conference on Small and Midsize Hydro Power. Over 1,200 participants came to inform themselves at the conferences taking place as part of RENEXPO 2008. 62 exhibitors registered at the trade fair on Sunday to exhibit next year as well, and the market leaders in all areas will be participating again.
“The growth of RENEXPO continues uninterrupted – we will continue to expand the individual areas of interest into next year,” according to Guenter Armbruster, sales manager of REECO GmbH. In the coming year, RENEXPO will celebrate its 10 year anniversary from September 24th-27th in the Augsburg Trade Fair and Convention Center. A few special events are being planned.
Statements from exhibitors at RENEXPO 2008
•“As a trade fair gold sponsor, we are very satisfied with the international attendance at RENEXPO. The trade fair character can be clearly read out of the quality of the talks.” – Markus Mueller, International Marketing and Technology, Heizomat GmbH.
•“RENEXPO is our best indicator for the coming business year. The significantly increased visitor reception here in Augsburg lets us to expect a very positive development,” according to Herbert Koestenbauer, General Manager of KWB Biomass Heating Systems, South Branch.
•“RENEXPO has completely satisfied our expectations as a first-time exhibitor! It is certain that we will be back in 2009,” according to Michael Rentsch, Marketing Director of Atmos Zentrallager, General Importer of Atmos Germany.
•“With the trade meetings on Thursday and Friday, we had many planners, engineers and qualified personnel at our booth. About 10 to 15 percent of the visitors were from other countries, including as a special highlight an Australian wood house construction company that made a deal to buy a large firing system from our Swiss company headquarters.” –Roland Kraus, Marketing at Bayern Schmid AG Wood Firing Systems.
•“We were delighted with the international audience here. Despite minimum investment sums exceeding €555,000, we had about 20 parties interested in wood waste and log processors that were very interested in our machines and interested in a purchase,” according to Peter Diefenbach, European Marketing of CBI Europe b.v.
•“We came with high expectations to RENEXPO. Since we only produce large facilities, we could not sell directly at the trade fair, as many of the neighboring booths did. However the number and quality of the new contacts we made were very promising, and we will have plenty of new business after the trade fair,” according to Sven Listing, Project Director of bioenergy systems GmbH.
•“Along with interesting contacts, RENEXPO 2008 gave us an excellent platform for looking into the needs and challenges of the market, in professional circles as well as for the end consumer. An all around successful event for us,” according to Mr. Haas from HELIOS Ventilators.
•“The demand for regenerative heating systems and solar energy remains strong. Customers are looking for solutions today, not waiting for tomorrow. The large number of international visitors in particular was a pleasant surprise. We will definitely be back next year,” according to Martin Kneibel, Technical Advisor at Max Weishaupt GmbH.
•“The organization of the trade fair into different areas for different themes had a positive effect. The visitors came directly to the booth they needed. All in all a successful trade fair!” –Helmut Schindler, Key Account Manager of the company AEREX House Technology Systems.
•“RENEXPO 2008 went above and beyond our expectations. There was a surprisingly high demand for high-quality renovation concepts. The idea of sustainability and ecology was well received by the trade fair visitors,” according to building biologist Christian Huber from the company Bau-Fritz GmbH & Co. KG.
•“The partners from e+haus that presented an exhibit at the RENEXPO for the third time are very satisfied. Many customers came looking for the e+haus in Hall 2 on the weekend. Here, they could learn about solutions for their planned renovations or receive an independent and competent consultation,” according to Helmut Kuhlberg, Director of Energy Consultation at the Augsburg utility company.
•“We were very happy with RENEXPO. The number of visitors as well as the quality of the undertakings are above average,” according to Manuela Mohr from the KfW Banking Group.
•“The visitor frequency is excellent. We will be back next year,” according to Roberto Kronke from Stiebel Eltron GmbH & Co. KG.
•“We are very satisfied with RENEXPO. Next year, we will be back with the theme of heat pumps,” according to Andreas Bernhard from Lechwerke.
•“My expectations of RENEXPO 2008 were met. The large number of international qualified visitors was very surprising,” according to Jan Kellner, District Manager for Bavaria from the company Rotex Heating Systems GmbH.
•“E.ON is again at the center of the energy political discussion. RENEXPO offers E.ON an ideal platform to talk to customers and critical consumers in more detail about climate protection, energy costs or renewable energy.” –Andreas Zelles, Project Manager at E.ON talking with E.ON Energy from Munich.
•“Many interested parties and customers use the trade fair RENEXPO in Augsburg to talk about the use of wind power with ENERCON. With the passing of the Renewable Energy Law, farmers and planners of wind power facilities have been given new incentives to continue such projects. Unfortunately, some authorizations hurdles remain that complicate the planning and implementation, and thus work against the declared goal of reducing CO2 emissions. The many inquiries from many parts of Europe, Africa and South America were very interesting and again showed that climbing energy costs represent a global problem. It would be great, if more politicians would use the trade fair to inform themselves of the potential of regenerative power generation.” – Joachim Keuerleber from ENERCON GmbH.