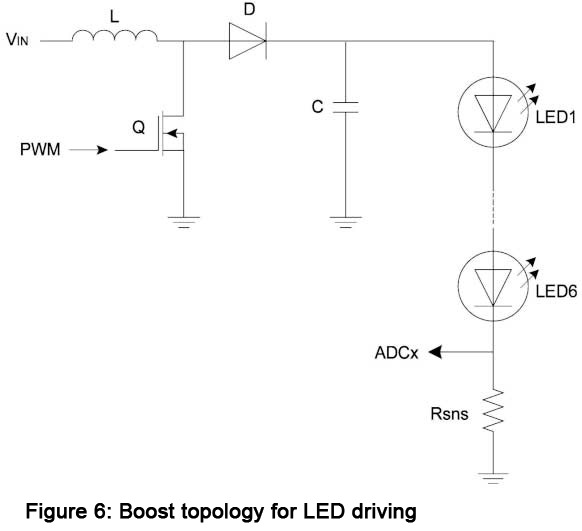 LED lighting is transforming the way in which light is being used and opening new opportunities for designers to add intelligent control and colour-mixing to LED-lighting fixtures. DSCs can drive innovation in applications ranging from automotive head-lights and tail-lights, to state-of-the-art light shows which can turn a public building into a work of art.

The addition of a Digital Signal Controller (DSC) enables efficient LED driving and accurate control over colour as well as communication with the outside world.  Together, these features give the designer the freedom to develop highly differentiated, next-generation LED-lighting fixtures.

Higher brightness, higher complexity
Low-power-indicator LEDs are a staple of many products and most engineers will be familiar with their simple design:  All they need is a voltage source and a series resistor of the right value, to keep the current of the LED below a typical level of less than 5 mA.

Connection to a GPIO pin on a microcontroller gives the designer the ability to make the LED blink.  However, the simplicity of LED design becomes considerably more complex when stringing together high-brightness, high-current LEDs with a forward current in excess of 350 mA.

Here, the designer faces the challenge of controlling the current, despite changes in temperature and the extreme heat generated by the LEDs themselves.

Intelligent current control
High-brightness LEDs need to maintain a relatively high constant current in order to maintain brightness and colour.  Figure 1 demonstrates how the LED’s luminous flux is proportional to the forward current (IF) through the LED.

A constant forward current is, therefore, crucial to achieve a consistent colour and light output.  Using a simple resistor in series with the LED, means that the forward current is determined by the following equation: (IF = (VSource-VF)/R)

As the source voltage (VSource) varies, the forward current will change, causing variations in the amount of light emitted by the LED. The LED therefore needs to be driven by a power supply that actively regulates the forward current.

A lot of heat is generated by the high-power LEDs themselves and can lead to a significant decrease in the LED’s lifespan and possible premature failures.

Actively controlling the LED’s forward current enables the level of heat-sinking to be determined for each design, based on the target forward current and estimated forward voltage. The use of temperature sensors also provides the option of monitoring for possible overtemperature situations.

Accurate colour control
The fact that LEDs can change their light output almost instantly, makes them ideal for light fixtures which need to change colour rapidly. A string of red, green and blue LEDs can be made to create any colour, simply by adjusting the brightness of each LED.

One approach is to simply raise or lower the forward current of each LED.  The problem with this is that changing the forward voltage not only changes the brightness, but also slightly changes the colour of the LED, which is a problem in applications which need accurate colour.
An alternative approach is to use a pulsed current which provides the same dimming effect without the perceived change in colour.

Figure 3 shows a dotted red line representing the average pulsed current which creates the change in brightness, whilst maintaining a constant forward current across the LED so that the perceived colour is unchanged.

Digital dimming control
The use of a Digital Signal Controller (DSC) greatly simplifies dimming using the pulsed-current technique.  The advanced PWM modules on many DSCs can be used to generate PWM signals which can be used to control the power stage for the LED.

These PWM modules feature override inputs that can quickly and precisely shut off the PWM outputs, allowing the current to the LED to be controlled so that the LED can be dimmed.  The amount of dimming is quantified by a number between zero and a value that represents full brightness. To set the LED to 50% brightness, a counter would count from zero to 255 and trigger the PWM override when a count of 128 is reached.

The PWM output then shuts off to remove the current from the LED.  When the counter reaches its maximum value of 255, it is reset to 0 and the PWM is re-enabled.

The process is repeated to create the pulsed current which is needed to dim the LED, as shown in Figure 4.  Typically, a frequency of over 400 Hz is used to ensure that the dimming frequency is fast enough to prevent the human eye seeing the flicker in the LED.

Digital LED driving
In addition to dimming control, a DSC can provide an active power supply to control the forward current to a high-brightness LED. Buck and the boost Switch Mode Power Supply (SMPS) topologies can both be used to power LEDs and both can benefit from DSC intelligence.

Figure 5: Buck topology for driving an LED or string of LEDs

A buck topology is used where the forward voltage of the LED or string of LEDs is less than the source voltage.  In this topology, shown in Figure 5, the PWM controls the switch (Q) and the voltage across the sense resistor (Rsns) corresponds to the forward current of the LED when the switch (Q) is closed.

The DSC’s comparator is used to compare the voltage across the resistor (Rsns) against a configurable internal reference that is proportional to the required forward current of the LED.  If the sensed voltage is greater than the internal reference, the analogue comparator disables the PWM’s opening switch (Q), which causes the inductor (L) to discharge its stored current through the diode (D) and the LED.

At the start of the next PWM period, the switch (Q) closes, and the process begins again.  The DSC’s advanced features allow this method to actively regulate the forward current through the LED without using any CPU overhead.

A boost topology is used where the forward voltage of the LED or string of LEDs is greater than the source voltage, as shown in Figure 6. Like the buck topology, the PWM controls the switch (Q) and the forward current is monitored across the sense resistor (Rsns).

The ADC module on the DSC samples the voltage across the sense resistor, which corresponds to the forward current of the LED.  This value is then used by a Proportional Integral (PI) control loop, executed in software on the DSC, to adjust the duty cycle to the switch (Q), based on the ADC reading and a software reference value corresponding to the required current.

By implementing the PI control loop in software the DSC provides the flexibility to use a wide variety of control-loop methods.  Minimising CPU overhead for the PI control loop also means that the DSC can control multiple LED strings and still have sufficient headroom to support additional features.

Digital communication
A DSC has enough processing capability to intelligently control the LED fixture whilst, at the same time, implementing a communication protocol without the need for a separate communicate-and-control device.

The DMX512 lighting-control protocol, for example, uses standard one-way communication, via one master and multiple slaves, to send commands to individual lighting fixtures at a rate of 512 bytes of data per packet and with individual addressing to each device or node.

High-speed processing enables a DSP to execute the fast control loop, such as the PI controller for the boost converter, as its top priority, whilst running the communication protocol, such as DMX512, in the background. Since the communication is implemented in software, it is not limited to a single protocol, but can allow the fixture to be controlled using any communication scheme.

Cutting the learning curve
Like any new technology, digital LED control presents designers with a steep learning curve which can be eased by using digitally-controlled LED-lighting kits, reference designs and application notes.

The high efficiency and instant dimming capability of LED will ensure that this technology will continue to drive innovation in colour-mixing and other lighting applications.  By adding the intelligent control and communication provided by a DSC, designers can equip LED-lighting fixtures with enhanced features and functionality which can deliver high levels of differentiation and considerable wow-factor in lighting applications.