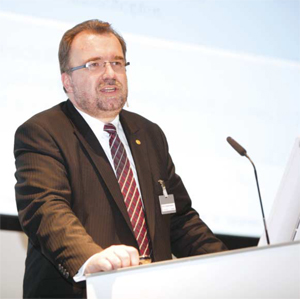 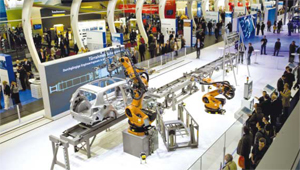 What in your view makes Industrie 4.0 stand out? What is it that makes this development so special?
The demands global competition places on industrial companies have remained basically the same for decades: productivity, speed and flexibility must be continually increased. In addition, demand for ever more individualized products continues to grow. This all requires a production process to be as flexible as possible. Industrie 4.0 is an initiative that offers an optimum response to these challenges.

Is the process changing subtly from one of mass production to customized production - is it because many more products than previously are now being adapted to meet individual customer requirements? In which areas is this change particularly prevalent?
A highly flexible production process must be able to handle both options. The efficiency of mass production is required, as in future there will still be products and platforms needing to be manufactured in large quantities to achieve economies of scale. But you are totally correct in saying that the manufacture of customized products is gaining in importance. In modern manufacturing environments it is already possible today to efficiently manufacture customized mass products.

The automotive industry is a good example of this, with two identical cars rarely coming off the production line. The flexibility of factories is increasing too, which means a large number of different products can be made in the same factory - something, for instance, we’re already doing at our facility in Amberg. This trend is set to continue and in principle it will apply to all areas of the production process.

How will this affect the way production personnel work from now on? Will the factory of the future actually still require human beings?
The role played by human beings is an aspect which is very important to me personally. Time and again, discussions about Industrie 4.0 touch on the issue of whether many people will become surplus to requirements once the production process is run automatically by machines.

I am however convinced that in an Industrie 4.0 world the human being will remain indispensable as a creative leader and thinker, using his intelligence to devise all - and I do mean all - the required processes and procedures and to teach the machines to execute them on the basis of the algorithms and software he himself has designed and developed. Only then can these machines function in the way the human being wants them to.

We’re currently experiencing a holistic development of machines and systems which of course in turn demands a development of human skills. In spite of all the autonomy we entrust to the production process, it is and remains the human being that defines the functions of the machines.

The engineer must determine the rules and parameters under which the production systems operate. For instance, it’s the human being that knows how a material has to be processed. It’s he also who decides whether production is to run especially fast or whether it needs to be run in a particularly resource-efficient manner. This task demands an even more in-depth understanding of the production process on the part of the employees.

Everyone’s talking about Industrie 4.0 - is it already available to buy today?
The actual era of Industrie 4.0 is still ahead of us - its development should be essentially complete in around 20 years from now. Many elements of this vision are already available today, but they still need to be combined as an integral whole. Here I’m thinking of topics such as communication and networking of the different components or data consistency between individual steps in the value creation chain.

Thanks to our PLM software, functions such as product design and production sequence planning can have access to the same data. At Siemens we’re already offering a wide range of Industrie 4.0 related products in the shape of our so-called Digital Enterprise Platform. Many of the technical modules are also already in operation with customers or in our own production facilities.

Can you cite some examples of where these are already operational today?
There are plenty of examples where the right approach is evident - here are three very different ones: NASA’s Jet Propulsion Laboratory used our PLM software in the design of its Mars Curiosity rover; pioneering work for a unique product that could only be guaranteed to operate in this challenging environment through intensive advance simulation. Together with VW we modernized a 17-year-old press production line.

Our software was used to create a total simulation, including handling equipment, that allowed two extra hubs per minute to be produced, resulting in some 1,000 additional parts per 8-hour shift and at the same time generating energy savings of 40 percent. And at our electronics factory in Amberg, integration between the virtual product generation and its actual production has been completed in a very exemplary manner.

Since 1989 the factory has managed to achieve a sevenfold increase in production volume in the same-sized production area and with barely an increase in personnel, while allowing incredible quality. The defect rate is - believe it or not - at 12 defects per million process steps.

In what areas is action still needed?
Though many of the open questions have already been identified, we’re just missing some of the answers and in some cases the driving force that will seek those answers. That’s another reason why the Industrie 4.0 initiative won’t suddenly be deemed "complete". There are still many years of hard work ahead for all those involved.

From my point of view, we need first and foremost to continue work on the topics of partially autonomous optimization, physical and IT security, semantic standards and dynamic architectures for these collaborations. However, because of the special challenges human beings working in this environment will face, the topics of training and lifelong learning also need to be extended still further.