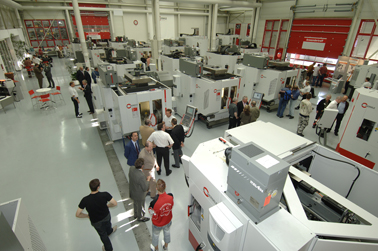 Over 2000 visitors from Germany and throughout Europe, including groups from Japan, Korea, Russia, Israel, China and Thailand, attended the traditional in-house exhibition of Hermle AG in Gosheim from April 23 - 26, 2008.
They all gained a good overview of the new technology offered in Hermle’s programme of machining centres. More than 20 machines in the Technology and Training Centre represented the fields in which Hermle machines are used.These include tool, die and mould making, medical technology, automotive and motorsports, the optical industry, suppliers to the above and many more.
One of the highlights was the newly introduced B 300 machining centre, “the ideal entry point to 3- and 5-axis machining technology”, which found a great deal of interest and often a new owner as well. An RS 3 robot system, integrated into the machining processes, demonstrated clearly the capability of Hermle production as well as the capabilities to be found in Germany. The robot system transports weights up to 500 kg, serves two Hermle C 40 U 5-axis machining centres and and in the future will be used for fully automatic machining of castings and aluminium parts. The system was developed by the Hermle subsidiary Hermle-Leibinger Systemtechnik GmbH in Tuttlingen, which is responsible for manufacturing automation components for use with Hermle machines.
The successful event was topped off by a special exhibit entitled “Tool Technology” with 40 exhibitors from industry sectors such as tool technology, CAD/CAM, and control technology.
Tours of the plant revealed Hermle AG’s manufacturing depth, illustrating especially the ultramodern manufacturing equipment, the latest in assembly concepts, and upcoming investment projects in the Gosheim location.