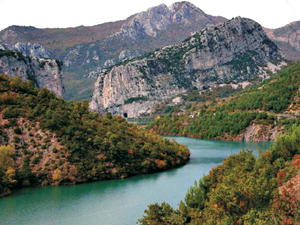 IFC, a member of the World Bank Group, is investing 6 million Euro for a 20 percent stake in Enso Hydro Energji to help it build a series of small hydropower projects in Albania that will increase the country’s electricity generation capacity and reduce energy imports.
Austrian hydropower developer Enso Hydro established Enso Hydro Energji to develop small and medium hydro power plants in Albania. Over the next three years the company aims to invest around 75 million Euro in the country to build new plants that will have the capacity to produce up to 50 megawatts of hydropower. Mountainous topography and high annual rainfall make Albania one of the most attractive countries in Europe for hydropower plants. Despite these natural advantages, the country has developed only a third of its estimated hydro power potential.

"We have already begun construction of an 8.9 megawatt run-of-the-river plant on the lower reaches of the Lengarica River in Permet district, in the southern prefecture of Gjirokaster," said Gilbert Frizberg, Founder and Chairman of the Enso Advisory Board. "By partnering with IFC, Enso strengthens its financial capability to realize additional hydro power projects in Albania."

The company also has an option to invest in a concession for a cascade of five small hydro plants on the Mati River in the central prefecture of Diber, with a total installed capacity of around 30 megawatts. The project, still at the concept stage, would involve construction of two diversion hydropower plants upstream, and three run-of-the-river type hydropower plants.

"Enso Hydro Energji is backed by an experienced management team that has delivered positive results in other countries," said Tomasz Telma, IFC Director for Europe and Central Asia. "This investment supports our strategy in Albania of stimulating investment into sustainable renewable energy sources such as hydro power".

IFC is the largest global development institution focused exclusively on the private sector. We help developing countries achieve sustainable growth by financing investment, providing advisory services to businesses and governments, and mobilizing capital in the international financial markets. In fiscal 2011, amid economic uncertainty across the globe, we helped our clients create jobs, strengthen environmental performance, and contribute to their local communities-all while driving our investments to an all-time high of nearly 19 billion USD.