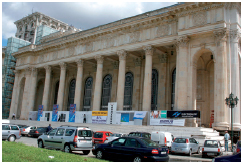 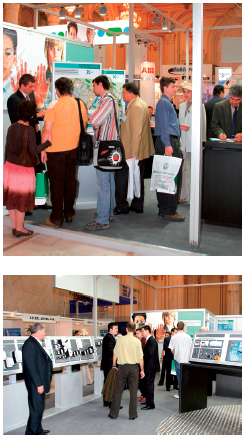 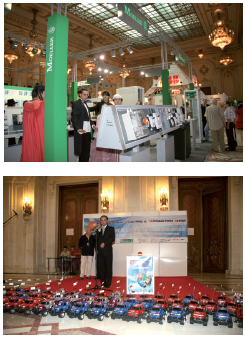 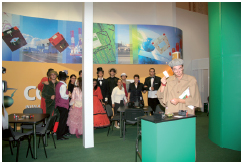 International Electric & Automation Show will take place in September 2008, between 02 and 05, in Bucharest, at the Parliament Palace. The visiting period is from 10:00 to 18:00 in those days.

In this year, as well the former editions, at IEAS will be the traditional participants, like: Moeller Electric, Schneider Electric, ABB, Tech Con, Coelco, Hensel, or Vitacom. Among the companies known from the last edition it exist many other which are at their first participation, like: Siemens, Legrand, Tyco Electronics, Gewiss, General Electric, O‘boyle and others.

The exposing surface is 3600 square meters, and this is the maximum surface for the Parliament Palace location. Unirii, Take Ionescu, I.C.Bratianu and the Gallery of Honor are the halls which will play host to IEAS.

The International Electric & Automation Show took place for the first time 4 years ago, in September. The place is known and admire by all the people. The location is also a luxury and select place for making exhibition, total different from the traditional locations. From 2005, from the first edition, the market tendency started step by step to straighten to the technical events. In specialized exhibition the companies presentations and their products are addressed to the ones interested, potential clients or purveyors. The environment created by such an event became professional by targeted promotion. In this way the proposal of the participated it is reached, and the visitors are interested in exponents and presentations. IEAS comes in this market with a new aspect for the exhibition, and brings together the concept of a specialized exhibition with show elements, the organizers say.

From an year to another, the exhibition grows by surface, visitors and exhibitors number. Every year IEAS brings news in the market: at the exhibition were launch and promoted companies and products, were organized Job Fairs for the ones who desire to work in this field, here was launched the first edition of the Companies Guide in Electrical and Automation Industry, were making presentations an symposiums on the connected events.

Every year IEAS makes from the 4 exhibition days, a pleasant show.

In 2005 – a young team of talented painter from “N. Tonitza” made many drawings for the visitors and exhibitors;

In 2006 – a choir of children sing for the first time the IEAS song, a special song created for this exhibition, and also a team of actors animate the first day.

In 2007 – the idea of a country named IEAS consisted in a different way to register. The normal invitations became an IEAS passport. Also all the visitors received a WATT – a special money for Ieas which could be used in the Free Area for different nonalcoholic drinks.

The above were the most important events from the last editions.

IEAS had a targeted promotion. Many news, and the layout appear in the principal specialized Romanian magazines, like: “Electricianul”, “Masurari si Automatizari”, “Tehnica si Tehnologie”, “Energia” and many others. Another way to promote IEAS was by newsletters, news and invitations - were sent periodic to at least 50 000 Romanian and foreign companies. Also, IEAS has the support of the associations from this field of activity, among those are: World Energy Council (CNR-CME), Automation and Electric Installation Association (SIEAR) and The Romanian Energy Policy Association (APER). The associations support had been felt in the connected event, named IEAS Symposiums. This took place in the same time with IEAS in a different hall.

The fourth edition presents a full-grown exhibition, known in the electrical and automation market. For this year there are big expectations, the organizers promise.

The companies registered in good time to have a better view in halls. In this moment the exhibitors list is completed. Sponsor for this year edition is General Electric Consumer & Industrial.

The news for this year: the Gallery of Honor Hall – international pavilion. This hall is dedicated just for the foreign companies, those companies which have not an office in Romania. Their wish is to enter in the Romanian market to find clients or purveyors to their products and services. Here will be companies from Poland, Germany, United Kingdom, but also Czech and Portugal. We hope that the international pavilion will be a point of attractiveness for the Ieas visitors. For the promotion of this pavilion we have to recourse to international partners, they promote the event over the seas. International Partners are: Expo Meteor, Expo Line, Chip Expo, Expert Expo and Busy Trade. They are organizers for the same area exhibitions in their countries.

As well like the last edition, we will have the Technical Days – the IEAS Symposiums. This will take place in Nicolae Balcescu Hall, a different hall, near the exhibition halls. The thematic will be chose from the electric and automation topics in this period. At IEAS the visitors could enter free. The registration is made on the strength of the invitations or on the business card. Each visitor will receive an IEAS Catalogue and also a exhibition map for a better localization of the stands.

Last year, at IEAS was launched the first edition of the Companies Guide in Electrical and Automation Industry (also named EL&A Guide), it is a catalogue addressed to the ones who used the products and the services from this area. This year will be launch the second edition of EL&A Guide. At IEAS, EL&A will be post on a special desk for a better view to all the visitors. Trough the year the Guide will be delivered at others specialized exhibitions, or by mail to companies which could be interested. The Guide will be promoted and delivered it at IEAS to all interested parties.

For the guide promotion it exist an electric portal – www.ghidelectric.ro . It is an electrical portal with news and informations in this field. The informations are periodic update to be in the present day. The registration on the web site is free, every companies or electricians could be there. Also a company could opt for an additional promotion on the web site. In this moment the web site, and the printed Guide has only a Romanian version, because they are addressed to the Romanian market.